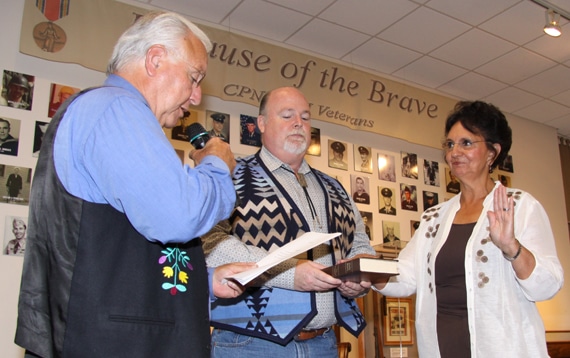 (Vice Chairman Linda Capps is sworn in for a new four-year term by Chairman John ‘Rocky’ Barrett as Secretary-Treasurer, D. Wayne Trousdale, who earned re-election without opposition, holds the Bible.)

Meeting in Shawnee, Oklahoma for their 12th annual Family Reunion Festival, Citizen Potawatomi Nation members have retained Linda Capps for a new four-year term as the Nation’s Vice Chairman. CPN voters also filled four seats in the tribe’s 16-member legislature and filled out the ranks of the CPN’s judiciary.

Capps outpolled Alan Becker of Cushing, Oklahoma by a count of 1556 to 213, for 88% of the vote. Capps  outstripped Becker 1264 to 186 in absentee ballots cast by members across the U.S. and 292 to 27 among walk-in voters who cast ballots at CPN tribal headquarters on Saturday, June 26. Vice Chairman Capps was sworn in to begin serving her new term during the CPN’s General Council meeting Saturday afternoon.

CPN Secretary-Treasurer D. Wayne Trousdale of Norman, Oklahoma earned a third four-year term when no one filed to oppose him in the election.

In legislative district #5, which encompasses the states of Colorado, Utah, Arizona, and New Mexico and a portion of far west Texas, incumbent Gene Lambert of Mesa, Arizona defeated Michael Carter, a fellow Arizonan, by an 11-vote margin, 90-79.

In District #6, which includes southern California and southern Nevada, Rande Kern Payne won over Charles M. ‘Chuck’ Goyer by a vote of 97 to 36.

In District #7, which includes northern California and northern Nevada, incumbent Thom Finks of Auburn, California goes into a run-off trailing fellow California Mark A. Johnson. Johnson received 61 votes. Finks had 41, and a third candidate, Jeanine Gains had 33. The run-off election will be held within the next 60 days – by August 25.

CPN voters retained CPN member Angela Riley, UCLA law professor and Director of the UCLAAmericanIndianStudiesCenter, as a Supreme Court Justice and elevated her to the post of Chief Justice. She replaces G. William Rice, who has held the post since the mid-1980s. Robert Coulter, Robert Coffey, and James White were also retained on the Supreme Court.

Judge Phil Lujan, who helped establish the Citizen Potawatomi Nation court system in the mid-1980s and who has been a CPN District judge since the days of the Court of Indian Offenses, won retention as the Nation’s Chief District Court Judge.

Finally, CPN voters gave overwhelming approval to a budget for Fiscal Year 2011 use of interest earnings from the Nation’s set-aside funds. The vote there was 1,452 to 107.