The Mad Tatter takes over tattooing in Shawnee 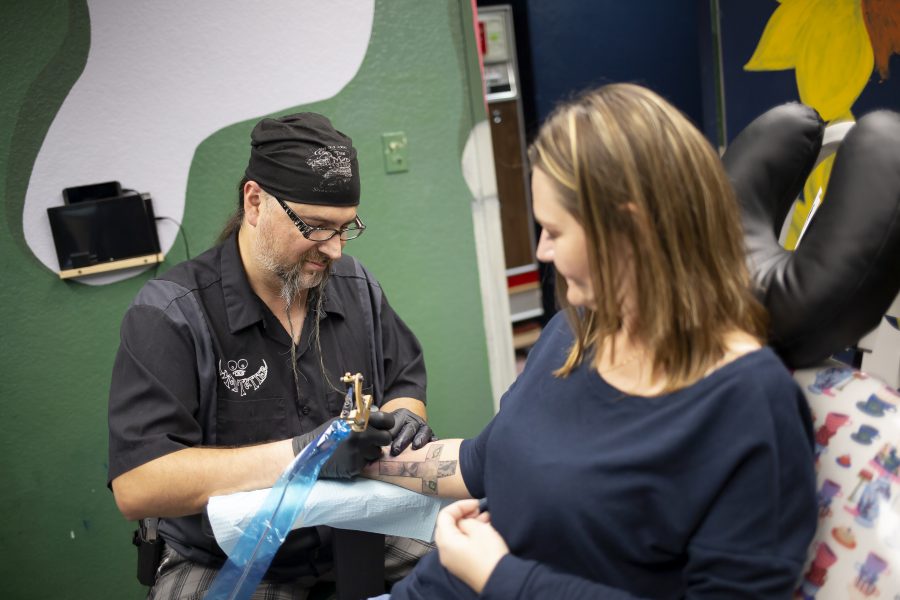 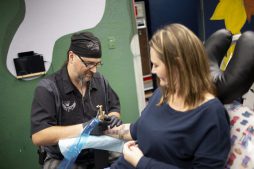 The Mad Tatter celebrated its two-year anniversary at the end of October, and in that time, people took notice. Inspired by the 1951 animated film, Alice in Wonderland, the tattoo shop’s interior boasts textured walls, bright colors and a different theme from the movie in every room.

“We wanted to make it like you fell down the rabbit hole, and you were in Alice in Wonderland. There’s still a lot that we’re doing,” said owner and Citizen Potawatomi Nation tribal member Isaac Bruno. “Every day we’re painting or redecorating or adding this or changing that. So if you come in this week, it’s going to be different next week because we’re always adding to it.”

Putting the parlor together took the work of the entire family, some friends and a few clients who wanted to get involved. Bruno’s wife tends to the business side of the shop, while his children help run the front and keep things organized and clean. They all painted and created the overall look of the business. Bruno chose Alice in Wonderland because he found it relatable.

“The ladies, they love Alice. They love the cute, little, cuddly creatures, and the guys can … wrap their heads around all the trippy, smoking caterpillars and that type of thing,” he said.

He wanted to own his own tattoo and piercing business for over a decade before the dream came true in 2016. Earlier this year, readers of the Shawnee News-Star honored The Mad Tatter with the title of “Best Tattoo Parlor” as part of the 2018 Best of the Best awards.

Bruno’s professional tattooing experience spans almost 30 years, and he describes that time as “just a lot of fun.”

However, his relationship with art began much earlier. He remembers winning his first art contest shortly after beginning elementary school for drawing the Starship Enterprise from the popular TV show Star Trek. From there, his interest expanded throughout his time at Del City High School.

“I had a great art teacher that taught me different styles, different techniques — everything from colored pencils to airbrushing,” he said. “Then, I actually did airbrushing for a long time on motorcycles, people, cars. Then it kind of evolved from that into the tattoos.”

While learning how to ink skin permanently, Bruno spoke with many other tattoo artists and spent time building his knowledge base.

“I just started doing research on my own trying to figure out: what is the proper way of doing it, what is the best way to heal, what are the best colors? And then just kind of go from there,” he said.

The unique pieces he completed on clients over the years include a wide variety of styles, pigments and themes. He claims no favorite genre or artistic approach.

“Of course, everybody loves doing skulls and dragons, but I just have fun just drawing,” he said. “I get to color with loud crayons all day long. So, I mean, who doesn’t like that?”

Bruno occasionally looks towards watercolors and his Native American lineage for artistic and lifestyle inspiration.

“It’s about … the ideals of the Native American. About how they struggled, how they lived off the land. They didn’t have to have all this stuff to survive and to be happy,” he said. “They did what they needed to. They had fun with it, and that’s something that’s always been there.”

He chose to open his parlor near his family and ancestral roots in a smaller town. Not inundated with similar businesses, Bruno’s artistry stands out in Shawnee. Part of his work involves sitting down with customers, hearing their stories and bringing a feeling or memory to life through a design.

Clients often tear up while seeing their tattoo in the mirror for the first time, which makes Bruno cry too. Despite the number of customers’ stories heard over the years, the emotional connections still touch him.

“There’s a lot of times when someone gives you a real heartfelt story, and man, it just tugs at your strings,” he said. “It makes you really, really start thinking about your life and how the people integrate into you and that type of thing.”

Bruno remembered one woman who requested a design featuring a beat up, tin garbage can with a coffee cup next to it. While the subject matter perplexed him, she confidently told him to proceed. 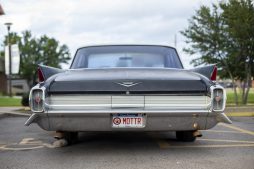 Bruno shows his pride for his business and heritage through his Cadillac’s custom Citizen Potawatomi Nation license plate.

“She explained it to me that her grandfather used to come and pick her up when she was a child, and they would go dumpster diving,” he said. “Then with the money and stuff that they got from it, he would go take her and go get cocoa and this and that. He passed away, so that was her memorial tattoo.”

Bruno attended the CPN Family Reunion Festival each summer as a child, and he made a point of taking his kids too. They enjoyed the craft and language classes, traditional food and games, dancing and spending time with distant relatives.

“I wish we could get more Tribal members in. I just don’t think a lot of people know about us, and that’s what we’re trying to do,” he said.

Other customers stop by to say hello, celebrate birthdays and hang out in the parlor’s game and media room. The Brunos welcome guests to any snacks sitting out.

Since the shop opened, Bruno has used it as a means to participate in fundraisers and community outreach programs such as Santa for Soldiers and local food drives. The Mad Tatter also sponsored a barrel racer’s rodeo dreams and held a bottled water drive for the city of Jones, Oklahoma, during a recent E. coli outbreak.

“Family is the most important thing to us — just to help out people. There’ve been times when I didn’t have food on my table, and people were kind enough to help me. We want to do the same thing,” Bruno said. “We’re in the position to where we can actually help people now, and we’re just stoked about it.”