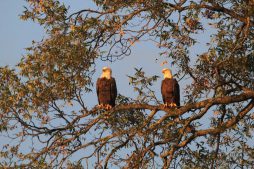 Weather patterns have been erratic this year, and fall has been no exception in Oklahoma. The pastures are still lush and green, and the trees, which would normally be nearly bare, are full of leaves that are only just beginning to suggest that autumn is here. But the wildlife around us has already signaled a shift in seasons. Monarch butterflies are moving south in waves ahead of slight cold fronts as they make their way to Mexico. Our once busy hummingbird feeders are all but vacant except for an occasional visitor that stops to refuel before continuing on south. Kettles of hawks, kites and vultures have been a regular sight overhead. The young bucks are starting to chase doe and fighting for dominance. However, the bucks are not the only onesthinking about their mates.

For many of our migrant and resident raptors, this time of year begins mating and nesting season. By nesting early, these raptors fledge young by the time spring arrives. Fledglings have time to learn the necessary skills to survive on their own when prey is most plentiful. The red-tailed hawks that nest in the east pasture have started their aerial displays and become very territorial. Kyla and Charlie are already carrying sticks to the nest. Their internal clock is right on time.

Wadasé has spent the majority of the year along the Washita River just southeast of Chickasha. She made regular rounds to all her familiar spots, and by late August, she arrived in Harrah, near Horseshoe Lake along the North Canadian River. The previous year, she was at the aviary for nearly two weeks in September just prior to Mko Kno’s release. So, as she moved down river, we were hopeful she might stop by, but after checking telemetry, we learned she had returned to the Washita River the first week of September. Trying not to be disappointed, we reminded ourselves how fortunate we are to still have consistent data from her GPS. That unit has stayed on far longer than we ever imagined could be possible. After all, Mko Kno wore his telemetry just over six months — that’s the average — and Wadasé is
the exception.

Looking back at past notes and Hownikan articles, one thing stands out; we keep crossing our fingers for one more season of data, hoping it will be the season that she picks a mate. Hoping this is the season that tells us where she nests and allows us to continue to tell her story. We have asked readers to keep good thoughts and prayers for her one more season. We continued to study her telemetry data closely, looking for even slight changes. Then on Sept. 14, just over a year since her last visit, she once again headed our way. According to the GPS, she passed over the aviary late in the evening at about 3,000 feet before stopping to the southeast near Earlsboro. The alarm calls from the eagles at sunrise the following morning let us know Wadasé was home.

We made our way to the office as fast as we could, and there she was, sitting up high in her favorite pecan tree out front like she had never left. But to our surprise, she wasn’t alone. She finally brought her mate home. They spent the biggest part of the day perched out front but would take turns flying loops around the pasture, up and down the creek to the river and occasionally sitting in the big tree out back. Evening came, and they flew east and off towards the river. In the distance, you could hear them vocalizing until last light. The next day was much of the same, but the following afternoon, we tried getting a better idea of where they were going to roost in the evenings. Nearly fainting and not being able to speak was our initial reaction as we watched Wadasé land in one of the great blue heron nests located in the roost east of the aviary. Many times, a new pair of eagles will take over these nests because the herons nest later in the spring. Think of their nest as a starter home for young couples.

Could she really nest right here? Possibly! For now, we will have to continue with fingers crossed. But the season we have been hoping for is finally here. She brought her plus one to meet the family, and we all know what a big step that is. Her internal clock appears to be right on time, and soon they will settle on a nest site. We’ll be keeping a close eye on her movements.

We encourage you to keep your eyes out for Wadasé if you are near any of the areas she frequents. For more information about CPN’s Eagle Aviary near Shawnee, Oklahoma, or to read previous updates, visit potawatomiheritage.org. Share your encounters with Wadasé, Mko Kno or any other eagles or migrating raptors in Oklahoma or wherever you may be with us at aviary@potawatomi.org.