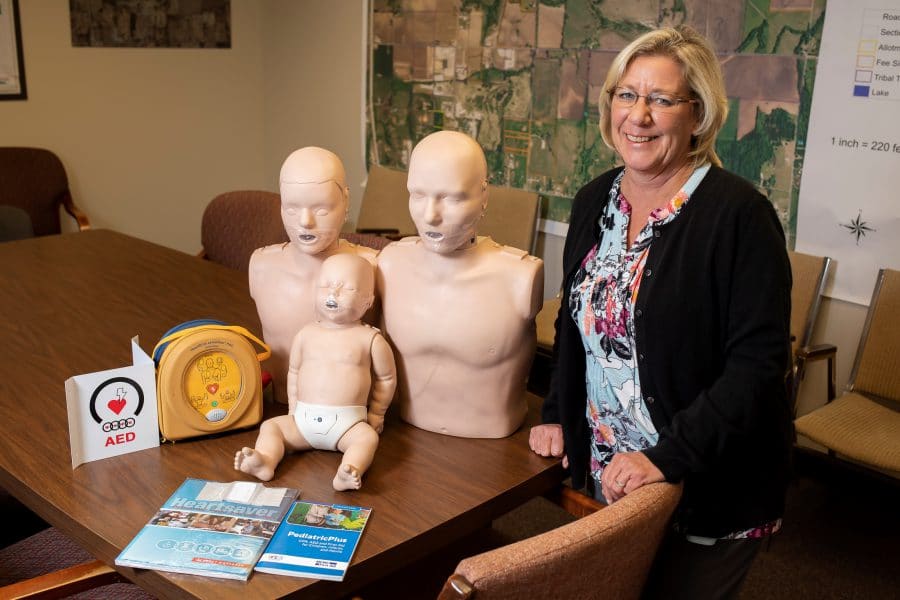 The Federal Emergency Management Agency outlined the need for citizens acting as first responders in its 2018-2022 Strategic Plan, conveying to citizens that a culture of preparedness begins with members of the community. Agency administrator Brock Long encourages people to create community disaster plans in their neighborhoods, know how to shut off their home’s water and gas valves and take CPR training.

“I was nervous about it, and I thought, ‘How are we going to do this?’” Rodriguez said. “And it came together. … The response has been overwhelming, and I’m just very excited and happy that I got to be a part of it.”

Barrett and Rodriguez discussed the training’s importance during one of their first meetings after she accepted her position in October 2017. He told Rodriguez he was in charge of safety and CPR training decades ago when he worked in the oilfields. Barrett gives it the same weight as FEMA.

“(The Chairman) just wanted to give this opportunity for our employees … and his reasoning was, if something happens to your family, you want to be able to help them,” Rodriguez said. “It really was not so much a workplace kind of thing. He was thinking of your families — the family and the community.”

CPN employees began receiving CPR and automated external defibrillator training from the Safety Department a year ago this month. Nearly 1,200 have completed the training, including every member of the electrical, rural water, housing, purchasing and education departments as well as the Office of Environmental Health.

“We were doing at least four classes a week, but there are weeks that we did two trainings a day,” she said. “Sometimes we would do a morning and an afternoon class. Occasionally, we would have two classes going at the same time.”

The classes mixed employees from various enterprises and departments across the Tribe, so workflow and productivity remained normal. A maximum of four instructors from the Safety Department held classes at any one time. They made learning the techniques of the lifesaving process easy to remember: the correct rhythm for chest compressions matches the Bee Gee’s hit song Stayin’ Alive.

“They thank us for giving them this training. And with that amount of employees, we have people from every walk of life and all ages,” Rodriguez said. “And the older ones are like, ‘Oh, I’m so glad. Now I know if something happens with my grandchildren, or with my children, or with my parents.’”

“People are very excited to be able to take it, and it gives them the confidence to know that if they’re in a situation, they can help,” she said. “So, the response has been wonderful. It’s been overwhelming, actually.”

Rodriguez took a CPR class about two decades ago and used the technique on her mother 10 years later. The training meant a great deal to her following the incident.

“After becoming an instructor and going through these classes and training, I know that I did everything I could that day,” she said. “That’s one of the most heartbreaking things is having to do it on your family or a loved one.”

Once classes began in late December 2017, word spread around the Tribe’s offices. The Safety Department prepared for the program as quickly as possible; however, some employees wanted immediate training. They requested their spot on the waiting list and volunteered to attend training first.

As classes became more regular, the number of certified employees crept into the hundreds. Several employees told Rodriguez they used their training afterward and felt more confident in their ability to help as opposed to being a bystander.

Rachelle Sheppard is a nail technician and esthetician at the Grand Casino Hotel & Resort’s spa. She took the CPR class from the Safety Department in May 2018 and used her knowledge approximately two weeks later during a stressful situation.

While Sheppard took cover in a storm shelter during a tornado, a crying woman ran in and said her unconscious sister stopped breathing outside. Sheppard’s husband used his training as a firefighter and began CPR but needed her help to find the AED.

“I don’t know that I would have known what I was looking for if I didn’t have that class. So, another guy and I ran in and grabbed it off the wall and took it to him,” Sheppard said.

The woman began breathing again before the paramedics arrived thanks to their swift teamwork. Sheppard now calls the training “a necessity” and “a wonderful addition” to her skillset. “I feel blessed to be part of the nation that includes us in things that can be life-changing for people,” she said.

“We’ve had some that have said, ‘I did CPR, and I did what I thought was right,’” Rodriguez said. “After taking this class, they realized that they did all that they could. Because that is one of the things that we teach them is some CPR is better than no CPR. And so they know that even if their timing was off, if their compressions were not accurate, they were doing everything they could.”

The Citizen Potawatomi Nation Health Services’ two clinics are taking over both first aid and CPR/AED training this month across the Tribe. Rodriguez says the Chairman’s goal of training everyone remains the same.