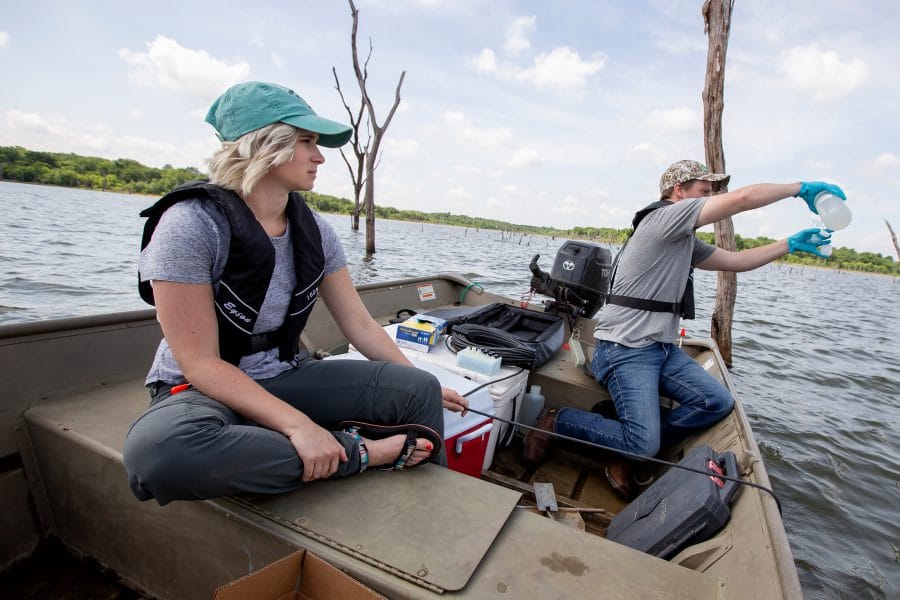 Lexi Freeman developed her love of animals and the earth while growing up on the Shawnee Milling Company Research Farm in Shawnee, Oklahoma, near Tribal headquarters.

In the summer of 2012, Lexi Freeman spent time with the Citizen Potawatomi Nation Office of Environmental Health as well as the Tribe’s eagle aviary during the six-week Potawatomi Leadership Program. The internship is open to young Tribal members following their senior year of high school or during their freshman year of college. The experience made her consider a career with CPN.

“I think the PLP is what cemented the idea that I wanted to come back to the Tribe,” she said.

Freeman holds a Master of Science in Environmental Science from Oklahoma State University as of May 2018. She immediately began her graduate studies after obtaining her Bachelor of Science in Zoology from the same institution in Stillwater, Oklahoma.

She accepted a full-time position as an environmental specialist with the Office of Environmental Health, which began a week after completing her master’s earlier this spring. The Rhodd descendant said she “couldn’t have planned it better.”

Freeman transitioned from studying animals to the earth after unexpectedly enjoying a couple of environmental science courses toward the end of her undergraduate degree. She admired the passion of one professor in particular, and Freeman wanted to mimic her teacher’s call to advocacy. During that time, the events surrounding water rights and regulations at the Standing Rock Sioux Reservation fit into her coursework.

“All of my watershed and environmental problem-solving classes were watching these videos of these people congregating at Standing Rock and standing up … for their water and for the earth,” she said. “Seeing that passion, that was definitely a factor.”

Freeman’s graduate program specialized in water and ecology, and her research focused on following and observing the American burying beetle, Nicrophorus americanus. Added to the federal endangered species list in the late 1980s, it buries and feeds off the bodies of dead animals.

The beetle reduces the spread of disease by taking decomposing carcasses underground and away from flies. They also improve the land by eating below the topsoil, releasing higher levels of nitrates, phosphates and potassium deep into the ground.

“I think they’re a beautiful insect. They’re big … and they’re just really distinctive. I turned into a bug nerd. I wasn’t into entomology at all until I was in grad school, and now my office … is just covered in bugs. Everybody’s like, ‘What’s wrong with you?’” she said, then laughed.

Throughout her research, Freeman spent every other weekend at Camp Gruber, an Oklahoma Army National Guard training facility located in Braggs, Oklahoma. The Army funds the American burying beetle research at the base because it holds one of the largest remaining populations of the insect.

“It’s one of the only areas left in the country where these beetles can reproduce successfully and double their numbers,” she said. “We did population estimates, surveys, and so my research was figuring out if there is a specific habitat they use more than anything else.”

Freeman concluded the species is a habitat generalist, meaning no one type of terrain attracts it more than another. As part of her graduate school thesis, she also discussed the beetle’s potential benefit to humans and its effect on the ecology of the land it inhabits. However, their status as an endangered species halts industrial expansion and crop cultivation in areas when surveyors discover their presence. Many farmers and land developers find them more than a nuisance, but not Freeman.

“I’m a big advocate for my beetle,” she said.

“There have always been those who have given me the chance when I didn’t have any experience, or I was fresh out of school,” she said.

Freeman started working for the Tribe at 16 years old. She helped run FireLake Mini Putt until she participated in the PLP before moving away for college. She also spent summers back from OSU working at FireLake Golf Course.

During her internship, Freeman learned about Potawatomi traditions, history and teachings that made pursuing a job with CPN feel like a calling — especially a position with the environmental department.

“Tribal nations have that connection with the land where they’re doing it to protect it, not because regulations say we have to. I mean, that is a part of it. You need to stay in compliance,” she said. “We do have this notion or belief that we need to protect it for the generations ahead and that we utilize it in a way that is friendly to Mother Earth.”

In her first few months as a staff member, she enjoyed her intellectually curious co-workers, learning about other branches of environmental science, expanding her skill set and witnessing the fervor of other employees.

“Being Native American, it’s just everything that they stand for and I wanted to be a part of. And I feel like I would really make a difference here,” Freeman said. “I think one of my fears is being lost in the 9 to 5 in obscurity and just doing my job and going home. I’d like to be the advocate that I saw in college with my professors who are passionate about something.”

The conferences she attended since beginning expanded her knowledge in tribal air quality and environmental concerns on Native American land. She also attended training on how to perform a Phase I Environmental Site Assessment. The reports explore the physical quality, concerns and history of a piece of property before the final purchase to reduce liability. Freeman now performs Phase I ESAs for the Tribe, and she enjoys discovering a bit of real estate’s past life.

“You figure out what was on the property — who owned it just to make sure that it was never once a gas station or there was a huge oil spill,” she said. “I get documents from the 1800s … spanning to the current time. You get these city directories that go back, and you can see every single person who lived at this address. So, it’s like being a private investigator. I think it’s fun.”

The expansive list of responsibilities and skills of her department impress her daily. It creates opportunities to participate in new projects and expansions. Watching CPN’s self-governance grow inspires Freeman, and the Office of Environmental Health ensures the Tribe meets its own high standards.

“It makes you wonder, in the future, environmentally, what are we going to be doing?” Freeman said. “I think that’s exciting to think about.”

Find out more about the Potawatomi Leadership Program, including how to apply, at plp.potawatomi.org.