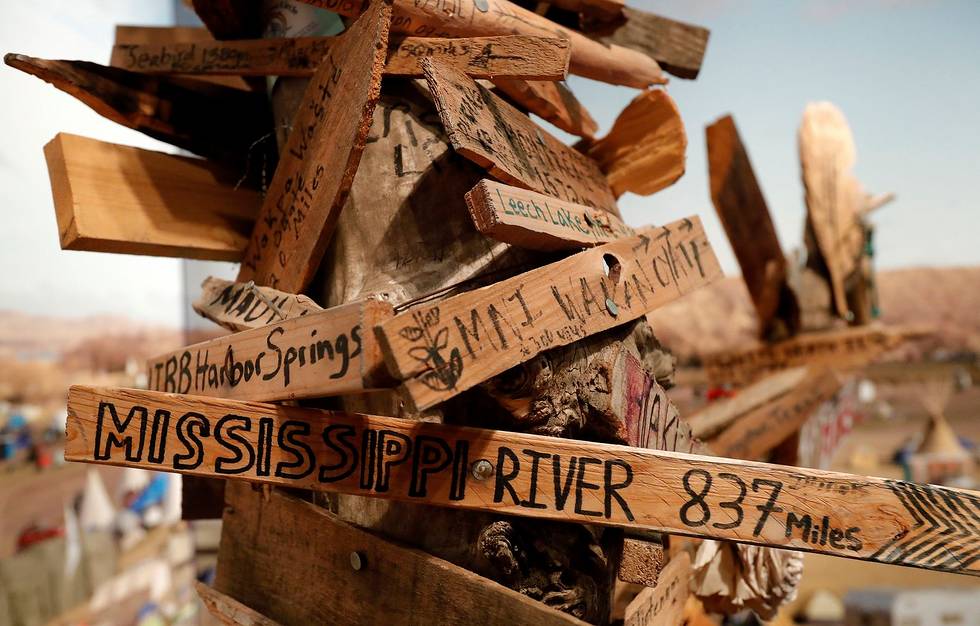 Detail of the milepost from the Dakota Access Pipeline protest site, on display at the National Museum of the American Indian in Washington, DC. Photo courtesy NMAI Photo Services Detail of the milepost from the Dakota Access Pipeline protest site, on display at the National Museum of the American Indian in Washington, DC. Photo courtesy NMAI Photo Services

Unveiled in October, the Smithsonian Institution’s National Museum of the American Indian showcases a monument spontaneously built by hundreds of indigenous tribes during what historians call the largest gathering of Native Americans in protest in history.

An 11.5-feet-tall milepost from the months long Dakota Access pipeline protests is the newest and final addition to the museum’s major exhibit Nation to Nation: Treaties Between the United States and American Indian Nations.

“Part of the point of Nation to Nation is that the treaties in the exhibition remain alive and influential,” Kevin Gover (Pawnee), NMAI director, said in a media statement.

The Dakota Access pipeline protests, which spanned April 2016 to February 2017, grew to include more than 12,000 activists and members of more than 300 federally recognized Native American tribes. They gathered to protect water resources and sacred sites from the construction of a portion of Energy Transfer Partners’ Dakota Access Pipeline, which would carry an estimated 570,000 barrels of oil a day under Lake Oahe and contested Standing Rock Indian Reservation land in North Dakota.

Nation to Nation runs through 2021 at NMAI on the National Mall in Washington, D.C. The Horse Creek (Fort Laramie) Treaty, also part of the Nations to Nations exhibit, was signed in 1851. It outlined land boundaries for northern Great Plains Native nations, including the Sioux. In 1868, another treaty guaranteed “absolute and undisturbed use and occupation” within the revised boundaries of the tribal nation’s territory.

Struggles to protect these rights, resources, lands and tribal sovereignty have persisted ever since.

Additionally, Lake Oahe — the site and natural resources the Sioux fought Energy Transfer Partners and the U.S. Army Corps of Engineers to protect — was created in the early 1960s by an Army Corps dam project. The Oahe Dam flooded and destroyed 90 percent of the tribe’s timberland, as well as vast swaths of “most fertile bottom lands” and wildlife, Everett J. Iron Eyes Sr., a water consultant and former Standing Rock Sioux Tribe water and natural resource director, told The Washington Post in late November 2016.

After Oahe Dam was complete, the Army Corps took control of the land around the lake and river. In 2014, that contested land became the locus of the Sioux tribe’s fight to protect treaty rights, as well as protecting the area’s clean water source, wildlife habitats and dozens of ancestral and burial sites from potential oil spills and leaks. Tribes, activists and environmentalists opposed the portion of the Dakota Access Pipeline planned for construction underneath Lake Oahe and the Missouri River in North Dakota, within contested treaty boundaries. It became known as “The Black Snake.”

“I was a young girl when the floods came and desecrated our burial sites and Sundance grounds. Our people are in that water,” Standing Rock Sacred Stone Camp founder LaDonna Brave Bull Allard wrote for Yes! magazine in September 2016. “Again, it is the U.S. Army Corps that is allowing these sites to be destroyed.”

Protests, pleas and negotiations continued, and then became more organized in March and April 2016, with the formation of Sacred Stone Camp in Cannon Ball, North Dakota. Fighting for the future

“When more than 12,000 activists and hundreds of Native Nations assembled in North Dakota during 2016 to protest the Dakota Access Pipeline, treaties were at the heart of the issue,” Gover said in a media statement.

“Their meaning and effect are still being evaluated and contested. All Americans inherit these treaty rights, Indian and non-Indian alike. This is playing out in front of us right now at Standing Rock. … As the largest gathering of Native Americans in protest, it was truly a historic event and one that should be addressed in the National Museum of the American Indian.”

As the Oceti Sakowin camp disbanded, water protector Hickory Edwards (Onondaga Nation) saved the milepost and donated it to the National Museum of the American Indian. Edwards is also credited with creating the landmark and adding its first two markers: “Standing Rock: 0 miles” and “Onondaga Nation: 1,572 miles.”

“I would rather have it be saved in a place where it can be viewed by everyone and show how we all came together for this reason rather than it be a trophy for DAPL,” Edwards told the West Fargo Pioneer. “If I didn’t save it, it would’ve been bulldozed.”

Standing Rock Sioux Tribe Chairman Dave Archambault II said in a media statement after President Trump signed the executive action, “Americans know this pipeline was unfairly rerouted toward our nation and without our consent. The existing pipeline route risks infringing on our treaty rights, contaminating our water and the water of 17 million Americans downstream.”

The first oil from Energy Transfer Partners’ Dakota Access Pipeline was delivered May 14. Its first leak, totaling 84 gallons at a South Dakota pump station, happened April 6, before the pipeline was fully operational.