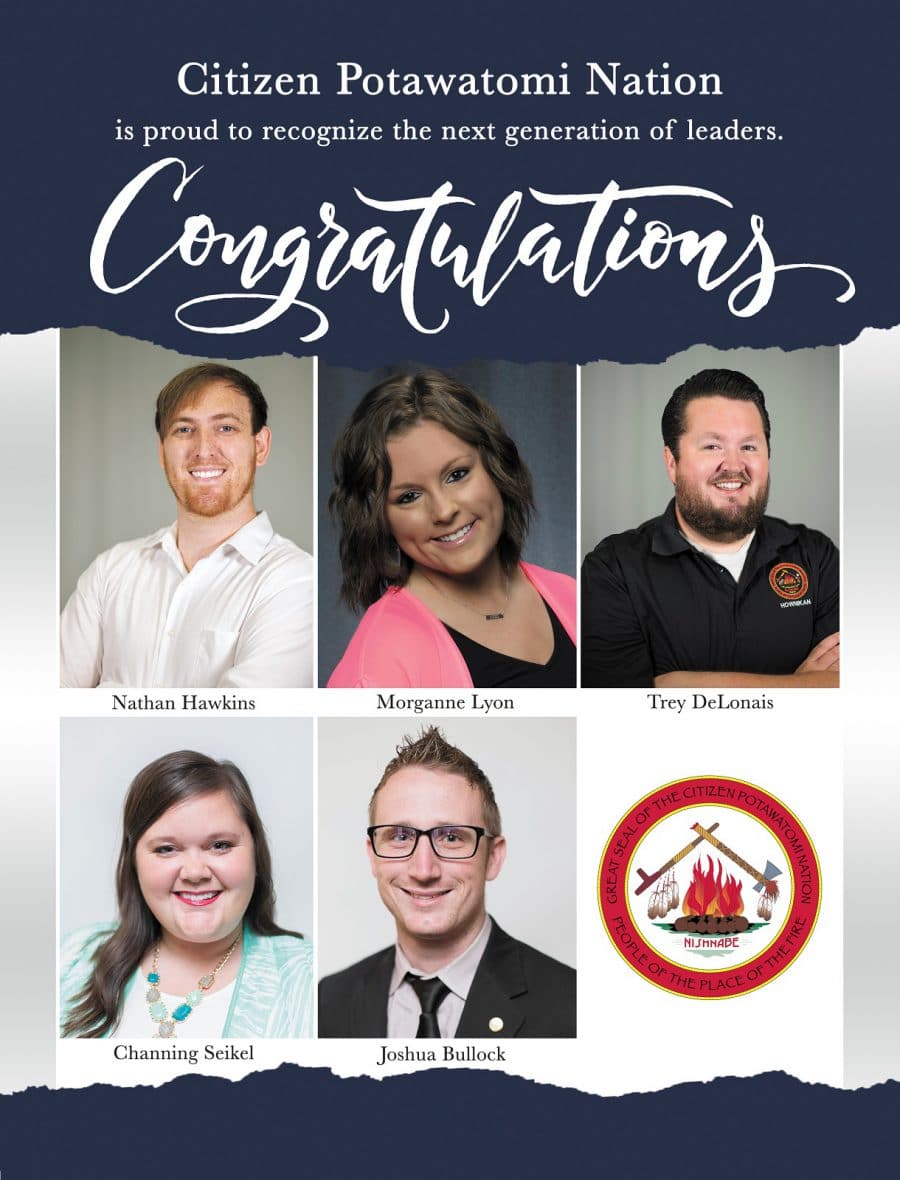 Citizen Potawatomi Nation employees Trey DeLonais, Morganne Lyon, Nathan Hawkins, Josh Bullock, and Channing Seikel were recently recognized by the NextGen Under 30 program and ionOklahoma Online magazine. The program honors the next generation of leaders who display innovation and creativity and who inspire others. Candidates are judged based on their participation in and contribution to their communities. This year, there were 185 honorees in 15 categories.

The Hownikan asked CPN employees what makes a good leader.

Morganne Lyon has worked for CPN for seven years in the tribal rolls and realty departments. Currently, she is the probate specialist and Southern Plains Regional Office tribal liaison.

Lyon believes that a good leader is someone who can be involved in a number of things and is always willing to give their all in anything they do. It is a person who isn’t afraid to try new things and who learns from mistakes.

She said a good leader encourages and helps others.

Josh Bullock has worked at CPN for almost two years, serving as a college adviser in its education department.

Bullock said being a good leader requires you to actively seek to better those you lead in both personal and professional ways and to work with them to further the organization’s mission and vision.

Channing Seikel has worked for CPN for almost two years as a senior college adviser.

Seikel believes that a good leader is someone who steps up when there is a job to be done that no one wants to do — someone who has integrity and someone who believes in their team to do the tasks set before them. A good leader listens to problems, comes up with effective solutions and listens to constructive feedback.

Trey DeLonais has worked as a CPN graphic designer for three years. In his time with the tribe, he’s been instrumental in developing brand standards, designing the Hownikan tribal paper and helping create the new exhibits at the Cultural Heritage Center.

He said exceptional leaders understand the people they lead are responsible for the success or failure of that team. They know how to capitalize on each person’s strengths to get the best work out of everyone.

Nathan Hawkins has worked for CPN for almost four years. He began as a web developer, responsible for the function of most of the tribal websites, and was recently promoted to software developer.

Hawkins believes that good leaders show integrity and humility and have the ability to delegate and level with their team.