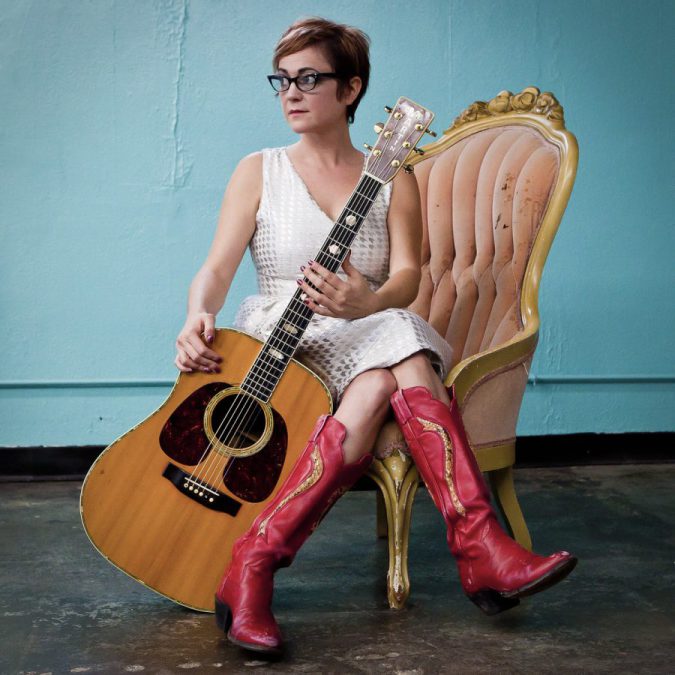 Play it Loud’s first season includes four streamable episodes, each sharing the experiences, music and lives of one of four rising Oklahoma musicians: TJ Mayes, Casper McWade, Carter Sampson and Levi Parham. The Aug. 25 concert at Grand Event Center brings them together on one stage. Ticket proceeds benefit the Red Dirt Relief Fund, a nonprofit established in 2012 to help Okie performers in crisis, from natural disaster to medical need.

A new episode premieres the 25th of each month leading into the live season finale. Stream all four episodes at cpn.news/playitloud.

The Aug. 25 concert is more than the culmination of a successful first season of the documentary-style Play it Loud series, said Chad Mathews, Grand Casino Hotel & Resort’s Marketing Director.

“First and foremost, we’re an entertainment venue,” Mathews said. “If you watch TV casino ads – every ad looks alike after a while; it’s just a lot of noise. The concept of a web and community-based music and concert series is authentic. It’s new. It brings everything together: music fans, musicians, community, charity. It breaks through that noise. I’m really excited about it.”

Independent filmmaker Adam Hampton hosts the show, which is created by his Outsiders Productions company, based in Shawnee, Oklahoma.

“Ten years on and this casino is still experiencing growth,” Mathews said. “We know our clientele and what they want; it’s our job to understand our customers and connect to the community. At the same time, there’s a lot of talent that comes out of it. What’s unique is these musicians, they’re all friends. They all support each other.

“They’re true musicians in the sense that they just want to play music,” he said. “They’re a family.”

What’s your role with the Play it Loud series, and how did Adam & The Outsiders Productions become involved in creating it?

Adam Hampton: I’m fortunate to be considered, I’d suppose, the “host” of the show. Although I’d liken the creative process to being less of an interview show and more of a travel series. … What we wanted to do was find stories and musicians that we found compelling and, in a sense, compare their journeys with those of my own as an independent filmmaker.

Our approach was that maybe part of the appeal of our series was that I could come at it from a different perspective and compare some battle scars, which makes sense because the beauty of trying to address multiple genres of music is to maybe introduce people to something they don’t normally listen to. …

We got involved through Chad’s connections through the casino and his awareness of what we could bring to the table as filmmakers and storytellers.

We didn’t wanna just make a “music” show. We wanted to make a show that people would want to watch and then follow.

Why is it important that this series and Aug. 25 concert happen at this specific venue, Grand Event Center at Grand Casino Hotel & Resort?

Hampton: The Grand Casino is, clearly, a fantastic venue, hands-down, top-notch, and it has a capacity for genuinely intimate concerts. I don’t think this is something that a lot of people are aware of if they haven’t experienced it.

I caught Kris Kristofferson there when he opened for Willie Nelson. I saw Alanis (Morissette) there a few weeks back. Both of these concerts were really intimate performances that highlighted personality and voice without a-billion-miles-away seating or too much distance from the audience to the performer.

That type of feel is perfect for the artists we’ve chosen; we wanna be close enough to experience firsthand with our brothers and sisters and engage the community we are trying to support. It’s church. The Grand as a venue is perfect for that, for the concert and subsequently for the series. Watch the “concert” footage of our artists on the Play It Loud stage, and you’ll get exactly what I’m saying.

How did you bring together this group of musicians, specifically, for season one of Play it Loud?

Hampton: Picking the right musicians fell primarily on Chad. He burdened that weight, which wasn’t easy, to be honest. This area is rich with talented performers and people with something to say, and, frankly, people we want to support. …

Ultimately, we also wanted to get several different voices with different perspectives that would make a nice blend. It was a carefully constructed mixtape with some country, some folky blues, some rockabilly. A collection of artists that one could imagine an audience could connect with across genres, and we had to free ourselves — Chad, especially — of the burden of trying to use every local musician first. The hope is that we have more seasons, more episodes, and continue to find ways to lift up our local and Oklahoma artists.

The Play it Loud series tagline is, “Unique voices and the stories that build on the foundations of Oklahoma’s rich musical heritage.” What is one aspect of this series that you believe best represents that mission, and why?

Hampton: I think Oklahoma is full of beautiful underdogs scrapping and scraping upwards — small towns with some big ideas and a pretty amazing blend of tragedy and triumph. So I connect personally to the Oklahoma aspect of our artists; I love the people here.

As far as the rest of your question, I think much of the focus in the interviews (of the musicians we met this season) seemed to dwell on authenticity, of building on those voices from the past in country or roots rock. And some of these cats were extremely knowledgeable about the history of the music they’re playing. And, these are real Oklahomans with real talent telling real stories. And there’s a campfire-type element to it.

With each of the artists, we got ’em to pick up an instrument on the day of the interview and play us a song — no sound equipment, no post-production — just play us a song like we’re sitting on a porch somewhere. That’s timeless; that’s beautiful.

How did you connect with Red Dirt Relief Fund, and why is it important that it’s the first recipient for the first season of Play it Loud?

Hampton: It was Chad, I believe, who bridged the connection with the Red Dirt Relief Fund. When he dropped this on us (Outsiders), we loved it.

Part of what I address in the narrative of the series is that music heals us, it bridges gaps between people and ideas. I can’t think of a more appropriate organization to highlight this than a relief fund for artistic folks in need. I’m aware that one of our artists was even the recipient of RDRF assistance and support. Music can heal us, and what it can’t fix requires payment. Let’s help those guys, too.

Scenes from the episodes were recorded at Grand Event Center. Was there a moment during recording that’s especially memorable? Please tell me about it. 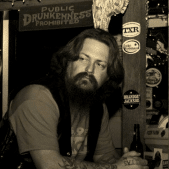 Hampton: I know that during filming I was standing there with the set and stage the Grand constructed — the warmth of it with the lighting and the backdrop — and I couldn’t help but smile a big, dumb smile. Our director of photography (Jason Alexander) was running around working, and I got to hang out with the band and lay on the floor and listen while everybody else worked.

Being in the moment — which is what music preaches in the first place, I figure — and watching, hearing these talented people perform with such passion … it kinda just gets under my skin in the best of ways. It’s akin to magic, except no tricks or deceptions. Just pure, real, true magic.

I cannot wait for this concert.

Briefly explain the “essence” of the show. What is it for musicians, the larger community of music lovers and the collaboration between Grand and Outsiders?

Hampton: Play It Loud is meant to examine different kinds of musicians in a documentary-style interview series that highlights their journey as artists in Oklahoma and around the world.

We cross genres — from folk to country to roots rock ’n’ roll — and have a whole lot of fun doing it.

The name Outsiders — a book/movie reference/tribute to author S.E. Hinton, or … ?

Hampton: Outsiders Productions started back when Jason Alexander (aforementioned DP) was putting together his mass communications senior project at East Central University. Jason and I grew up together; we’ve been best friends since we were around 6. We both went to Dale. I had graduated from ECU but went back to enroll so we could form Outsiders and film our first movie through ECU. I had a background in writing and minored in mass comm. Later we added Kenny Pitts (also a Shawnee kid, also an ECU grad) and Chad Mathews to form an LLC. We’ve been steady working on independent filmmaking since.

These are my brothers. The title, of course, comes at least a little from S.E. Hinton and also the idea that Jason and I felt like we were outside of any politically “in” groups. We were our own thing, our own family. It was important to us that we made it — whatever that means — on our own. Plus, we thought it sounded cool.

Similarly, the “Play it Loud” show name. How did that come about?

Hampton: Play It Loud is actually derived from our web series, Rough Cut. (We haven’t released it online yet). I wrote/directed/acted in it — Chad and Kenny helped produce it and act in it as well. In the series, about starving artist filmmakers, my character gives a speech about how they can’t give up.

He tells a story about a young Bob Dylan. (This info is also presented in the pilot episode of Play it Loud.) In the story, Bob Dylan is being booed onstage, and he turns to his band and says, “Play it loud.” This was actually recorded, and you can hear it in bootleg versions of this particular concert. I’m a big Dylan fan, and I always loved that level of defiance. It’s beautiful to me, genuinely. I loved that his response to being told to shut up was to sing even louder.

There’s a gorgeousness to that kind of rebelliousness, and I think music — particularly rock music and folk music — is meant for that. So when Chad came up with the idea for Play It Loud the series, we kicked around names for it, and he came up with using that Dylan line.

Please explain the format of each episode, if there is one, and the importance of the documentary-style editing and recording.

Hampton: In each episode, I speak with each artist and try to capture in our discussion some part of who they are, what they’ve been through or what they’re wanting to say. We also have them play an acoustic performance, and we have them play with a full band on the Play It Loud stage at the Grand.

The format may shift from one artist to the other, but the components remain the same: The discussion, the performances, the theme of music as a bridge between people, and we want the visual experience to be fun. … So we shot it like an unscripted movie. We turned on our cameras in the coolest environments possible and let it rip.