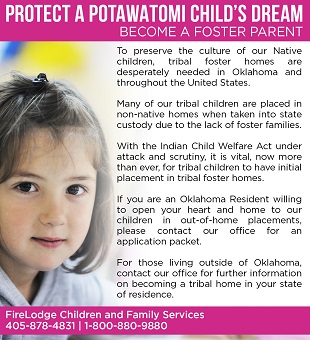 In recognition of November as National Adoption Month, we spoke to the Citizen Potawatomi Nation Indian Child Welfare Department’s specialist in charge of foster care and adoptions on the issues she sees families face in taking on these vital responsibilities.

Due to high profile adoptions like the Baby Veronica and Lexi Page cases, concerns and misunderstandings about the adoption of children with tribal heritage abound. Due to efforts of organizations like the Goldwater Institute, which aim to overturn the Indian Child Welfare Act that has sought to keep Native children in tribal homes after centuries of removals, its little wonder that there is confusion amongst those who might otherwise be interested in adopting.

Darla Courtney has seen this first hand. Since joining the Citizen Potawatomi Nation’s Indian Child Welfare Department in 2009 as an adoption and foster care specialist, she has worked to educate potential foster and adoptive parents about the facts.

“Many families are afraid that if they go through the tribal ICW department to foster or adopt, they are at a huge risk of the tribe swooping in and yanking the child from their home just to move them elsewhere,” she explained.

This has been a concern she’s heard frequently since the 2015 case of Lexi Page, a Native American child removed from a non-Native foster home and placed with biological relatives of the her tribe, the Choctaw Nation. The case was widely covered in the U.S., but reporting on the part of local, state and national media concerning the Indian Child Welfare Act’s provisions were erroneously reported, as noted in a release from the Native American Journalists Association.

As Courtney explained, the headlines and misreported information aside, her department’s mission is ultimately the protection of the Potawatomi children. In 2015, she oversaw the process that resulted in the adoption of eight children through the CPN Tribal Court system. In 2016, they have already had five children adopted. These figures only include those children through the tribal court system, though the CPN ICW department is notified by state authorities across the U.S. when a Potawatomi child is adopted through their systems.

The circumstances faced by potential adoptive families are challenging, yet Courtney offers counsel in the form of someone familiar with what they are facing. Her family once made the decision to become a foster home, where they provided a stable environment for a number of children.

“Personally knowing the ups, downs, tears and joy of fostering has given me a heart for my foster and adoptive parents,” she explained.

She also knows well what lies ahead for the kids who are not adopted. It’s difficult enough being a teenager, much less being one without a stable home or support system.

Said Courtney, “For those who are not adopted, they will remain in custody until they ‘age out.’ The majority will be on their own when they turn 18 years of age. Depending on certain criteria, the teen may have been eligible to enroll in an independent living program to prepare them for life on their own. For those who are ineligible, our department will do what we can to assist the teen.”

While programs such as ICW can help in this regard, the best outcome is to get the child into a foster family. Given the thinly stretched state and local resources, tribal programs like the CPNICW are always in search of foster homes and adoptive families. The first step is typically one of the hardest for families interested in exploring the possibility, but as Courtney explained, it’s as simple as sending an email or making a phone call.

“Once we receive a call or email expressing interest in adoption, a packet is mailed to the prospective adoptive parent. The packet contains an application, background check forms and a copy of our ICW handbook for placement homes,” she said.

Background checks, interviews and home inspections are the norm, which Courtney concedes may seem intrusive. Yet keeping with her department’s mission, the research is done with the child and adoptive or foster family’s best interests in mind.

Every circumstance has a unique story

Neil and Heather Mick first heard about the tribal foster care and adoption program through customers at their beauty salon in Tecumseh, Oklahoma. Neil said that upon learning of the CPNICW program, his wife, who is also a citizen of the Cherokee Nation, set her mind on adopting. As Neil explained it, they wanted to “do their part.”

Initially starting off as a foster parent to one child in need of a foster home, the Micks count five adoptive children alongside their three biological children and a nephew. All told, they have nine children in their care, aged from four to 19 years old.

“I tell people that after four the noise level doesn’t change much,” joked Mick.

Their story isn’t altogether unique, as many children in foster care also have siblings in the system. Adoptive families like the Micks end up taking on sibling groups to keep the children together. Of their five adoptive children, none were supposed to have been with the family for more than two weeks.

“We didn’t get in this with the intention of adopting five children,” he explained. “It was not our plan. But every circumstance has a unique story and it’s difficult to walk away from those children after you’ve had them in foster care for six months, a year, and they’re part of your family and then they come up for adoption.”

Taking in a child from a broken home may seem daunting to a potential foster parent, but Mick noted that it was a positive experience.

Courtney, a former foster parent herself, echoed his sentiment.

“While the journey may be rough at times, they are planting a seed into a child’s life. For foster parents, they seldom see the results of their efforts. For the adoptive parents, they are able to nurture the seed with love and stability until maturity occurs and the child blossoms to their full potential.”

Tribal member Mikal Eckstrom wrote an op-ed in April for the Wall Street Journal about why the Indian Child Welfare Act was needed.