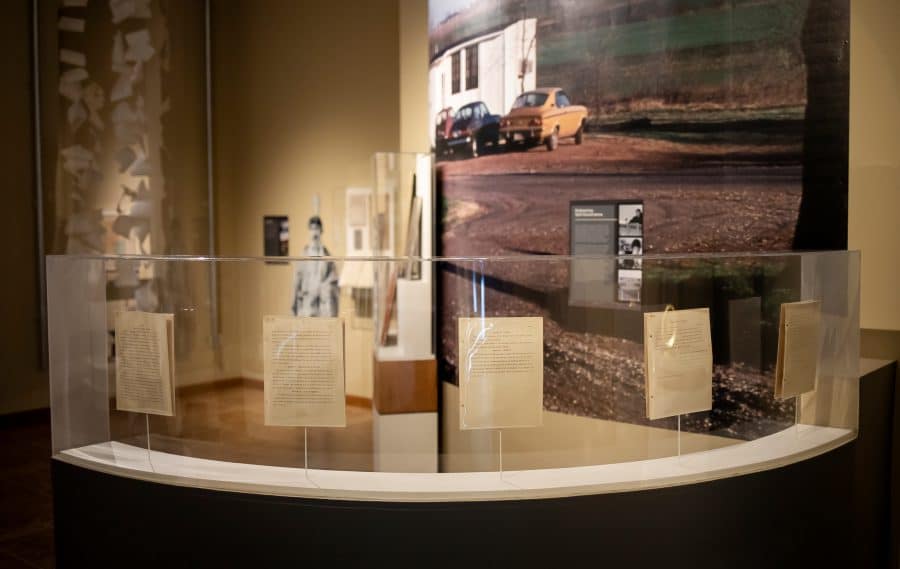 Since the Citizen Potawatomi Nation’s arrival in Indian Territory, the Tribe has experienced trials and adversity. Rather than succumb to those difficulties, leaders employed new tactics to help the Tribe grow and thrive. During the 20th century, CPN established a sound government, and the foundation created continues to direct the Nation. The Cultural Heritage Center’s final gallery, Seventh Generation, celebrates the Tribe’s successes as well as educates the public on the Nation’s strength, endurance and perseverance.

“We decided to name the final gallery Seventh Generation to tie it back to our first gallery where we were talking about the Seven Fires Prophecy,” said CPN Cultural Heritage Center Director Kelli Mosteller, Ph.D. “The final prophecy says that there will be a generation that comes along and goes back along the path of the ancestors, and they pick up the things that our ancestors were forced to put down.”

The United States government imposed an array of negative policies and procedures that smothered Native traditions, including language and sacred ceremonies. However, the pieces left behind by those individuals continue to carry the Citizen Potawatomi.

“We believe we are in the early stages of the Seventh Fire, and by people visiting the museum, coming and learning their language, more about their culture — that’s part of what it means to be part of the Seventh Generation,” she said.

While many may see modern CPN as prosperous, the Tribe’s contemporary status did not happen overnight.

“They probably don’t realize the hardships that the community had to face and the struggles that previous leaders and community members had to endure and work through to create the platform the Tribe is built on today,” explained Blake Norton, CHC curator.

“When Oklahoma became a U.S. state, it was at the expense of a lot of the tribal governments,” Dr. Mosteller said.

Native and non-Native leaders alike had difficulty understanding where city, county, state or tribal government jurisdictions began and ended. This created negative implications for the tribes located within Indian Territory.

Federal allotment policies also plagued the tribes in Oklahoma by dismantling communal culture. However, the Citizen Potawatomi learned how to leverage resources to enact change.

As soon as Citizen Potawatomi settled in present-day Oklahoma, Tribal members exercised their sovereignty through letter-writing campaigns and building relationships with all levels of government.

Mary Anderson Bourbonnais was at the forefront of these endeavors, and the CHC chose to display her wedding dress between the final two galleries to acknowledge her dedication.

“As an older woman, (Mary Bourbonnais) had no hesitation to express her views in written form to anyone that she could reach out to,” Dr. Mosteller explained. At the beginning of the 20th century, Tribal leaders also began hiring experienced lawyers to represent the Nation’s interests.

Even today, “when we see our sovereignty being challenged, we fight back,” Dr. Mosteller said. “We know our rights, we know what the federal government has promised us, and we are not going to sit back and let them not follow through on the promises that they made.”

As an ode to these early efforts, the CHC created a display staff commonly refer to as the “document tornado.”

“It symbolizes the storm and whirlwind of correspondence between the Tribe and U.S. government that set a precedent for this time period,” Norton said. “Members of the community were filing complaints and petitioning for assistance in an attempt to be recognized as a community and as Citizen Potawatomi people.”

Numerous pieces of legislation continued negative policies into the 1900s, as discussions around federal Indian affairs began to evolve.

“In the 1930s, the federal government looked and realized that the policy of allotment was a complete disaster,” Dr. Mosteller said.

The Indian Reorganization Act of 1934 put an end to land allotment and supplied the Tribe an opportunity to express its sovereignty through the development of an official constitution. The IRA re-recognized tribes as well as provided a format to help Native nations develop their governments in a structure similar to the U.S.

“The Indian Reorganization Act really set the foundation for the governmental growth that would happen in our community over the next several generations and decades and led to a lot of the changes we saw within our community in the late 1970s,” Dr. Mosteller said.

Visitors can learn more about the IRA and other policies that impacted CPN and Indian Country over the past century through the interactive featured near the Seventh Generation gallery’s entrance.

Although the IRA generated some beneficial changes, the Tribe still struggled to gain a solid base. When CPN’s current Chairman John “Rocky” Barrett joined the Nation’s business committee as a 26-year-old in the 1970s, CPN conducted business with a few hundred dollars to its name out of a trailer borrowed from the Bureau of Indian Affairs.

CHC staff strategically placed the 1938 Tribal constitution developed after the IRA’s passage in front of a mural of the trailer as a juxtaposition — reminding visitors how far the Tribe has come. Barrett became CPN’s Chairman in 1985, and since then, the Nation has grown to contribute an economic impact of more than $500 million annually.

“The trailer is a well-known symbol of transition for the community, signifying growth, self-reliance and true sovereignty,” Norton said. “It’s an impressive image, when you understand how the seat of government has flourished and expanded over four decades.”

Under the direction of Chairman Barrett and Vice-Chairman Linda Capps, CPN revised its constitution again in 2007, which established a base for the Tribe’s 21st century resurgence. This constitution creates greater checks and balances, and by developing a legislative arm with representatives across the United States, members can connect to the Nation no matter where they live.

“We wanted to show that this is what success looks like. It’s from being reliant on the federal government to either provide us a place to have a headquarters to now making sure the voices are heard from Tribal members all over the United States and that we are able to fully represent the needs of our community, far and wide, in serving the Potawatomi people the best way we possibly can,” Dr. Mosteller said.

The Seventh Generation gallery design challenged staff, as CPN’s modern history is constantly changing. However, technology served as a solution.

“We wanted to include interactives so that we could delve deeper into subject matter that we weren’t able to physically display on the floor because of architectural limitations and space,” Norton said. “It also gives staff the opportunity to conduct added research into topics, enhancing our educational platforms and allowing Tribal members to better understand who they are as Potawatomi people.”

Although the CHC’s main audience is CPN tribal members, staff hope the galleries and interactives reach everyone.

“Citizen Potawatomi history isn’t something that’s just of the past. It’s not stagnant,” Dr. Mosteller said. “Our future is bright. There are a lot of things that are coming in the future that are going to allow us to become an even greater representative of what a truly sovereign nation is, and we will meet the constantly growing and changing needs of our Tribal community and the community around us.”

20th century and beyond

The CHC proudly displays Chairman Barrett’s regalia as well as a full woman’s set created by CPN member Peggy Hancock Kinder at the end of the Seventh Generation.

“We really wanted to highlight some material culture, which is more of a challenge than some would think because people don’t want to give up their things, especially if they’re still using them,” Dr. Mosteller explained.

The two sets of regalia serve as an example to CPN members of various options that they can incorporate into their own pieces.

“Not only does this allow us to show modern Citizen Potawatomi culture and history, but it also allows us to tie back to the rest of the galleries and the clothing that we’ve displayed, going all the way back to the pre-contact village scene,” she said.

The CHC also chose to display a painting depicting the Tribe’s former powwow grounds under the shade of the pecan grove near current CPN headquarters as well as signage from early Tribal enterprises. Additionally, a Potawatomi language kiosk allows visitors to learn the Potawatomi language in a fun, contemporary format.

“What’s included in this gallery serves to remind Tribal members that CPN today is a very diverse concept,” Dr. Mosteller said. “It incorporates businesses and enterprises, culture and dancing and art. We tried to speak to that in all capacities to some degree.”

“We’re using the Cultural Heritage Center to help preserve and display that which was found along the path that the ancestors left,” Norton said. “We’re using those pieces to reteach the culture to ourselves and to the larger community.”

Besides the 11 galleries, the CHC hosts public classes and workshops. The programming assists CPN members gain a better understanding of their heritage as well as educates the outside community on Tribal teachings and traditions.

“We hope people take away a sense of pride from the Seventh Generation gallery — a sense of cultural renewal and a sense of understanding — truly understanding who they are as Potawatomi and Nishnabe people and are excited to share that with the world,” Norton said.

For a complete list of upcoming events and programming, visit potawatomi.org/events.