When it comes to powwows there are always plenty of gifts, donations and awards to be given out during such event. Gift giving and honoring is a great way to give powwow dancers a rest from the heat.  At the 2014 Potawatomi Gathering of Nations there were many different talents shown and gifts handed out while dancers sought out shade and water from the midday sun at the Gun Lake Tribe’s festival grounds. On one of the breaks during the three day powwow, CPN Veteran Curtis Wright was given a special honoring by the Match-E-Be-Nash-She-Wish Band of Potawatomi.

“I had no idea what was going to happen,” said Wright. “They really caught me by surprise as I was not expecting to do something like that at all.” 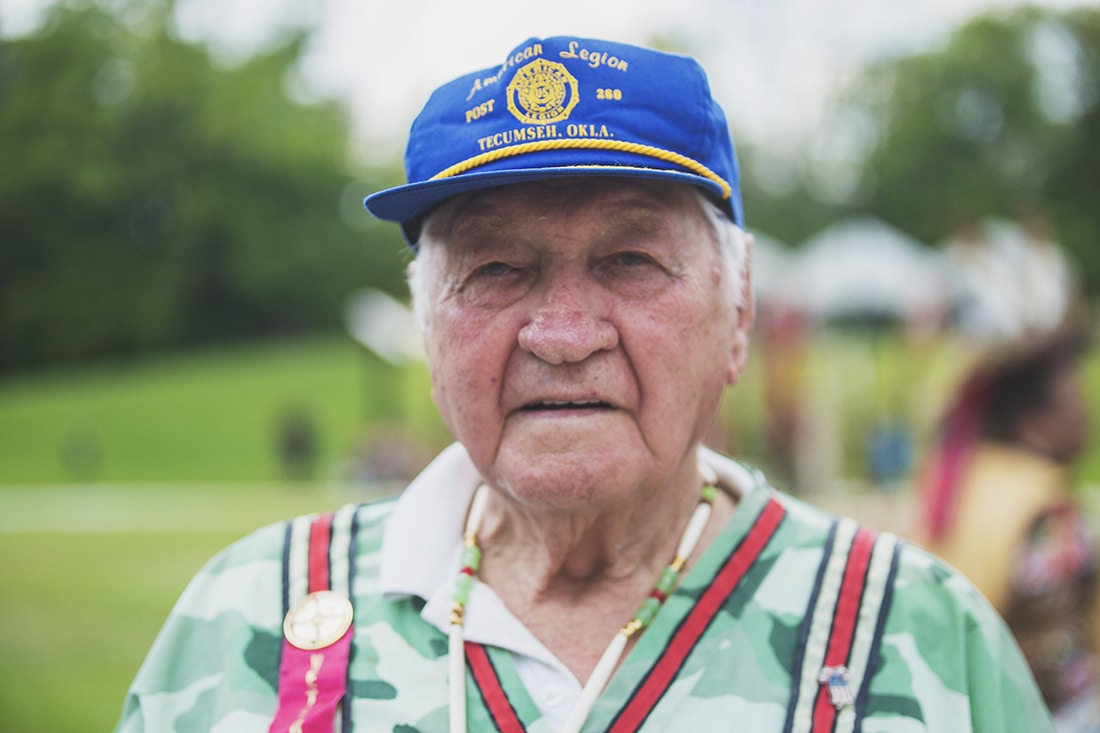 Clyde “Rowdy” Yates and Legislator Jon Boursaw, both CPN Veterans, spoke to Wright the same day of him being honored. Yates knew about Wright’s past in the 94th Combat Infantry Division of General Patton’s 3rd Army and Boursaw knew nothing of it.

“The first day of the three different powwows all veterans from every tribe were honored and Curtis wrote down the he was a WWII veteran and saw combat during the Battle of the Bulge,” explained Boursaw. “I’ve known Curtis for quite some time and knew he was a veteran but I had no idea he was a WWII combat veteran.”

Boursaw continued, “Rowdy and I wanted the host tribe to know that there was a veteran from WWII here, so we explained to them that Curtis was a WWII veteran and had fought in the Battle of the Bulge under General Patton’s division.”

Unbeknownst to everyone, a call came across the speakers from the powwow emcee for all CPN members to come down to the dancing arena to honor Wright.

“The opportunity to see a WWII veteran honored like that was truly a special event for me,” said Yates. “I’ve known Curtis for a long time now and was happy to be a part of his special honoring.”

From all angles of the powwow grounds, CPN members came down to share the special moment with Wright and his wife Cristina Fritchman-Wright. He was given a blanket and a United States Army beaded medallion as an honor for his time serving the country. The blanket signifies the Potawatomi community wrapping themselves around him as a family and is a powerful symbol in Native American culture. The group then circled the powwow arena and Curtis, along with his wife, sat down and were greeted by those wanting to pay their respects.

“It was a great honor to be out there,” said Wright. “I try and not think about my time in the war so I went out there for all the guys who never made it back. My honoring goes to them.”