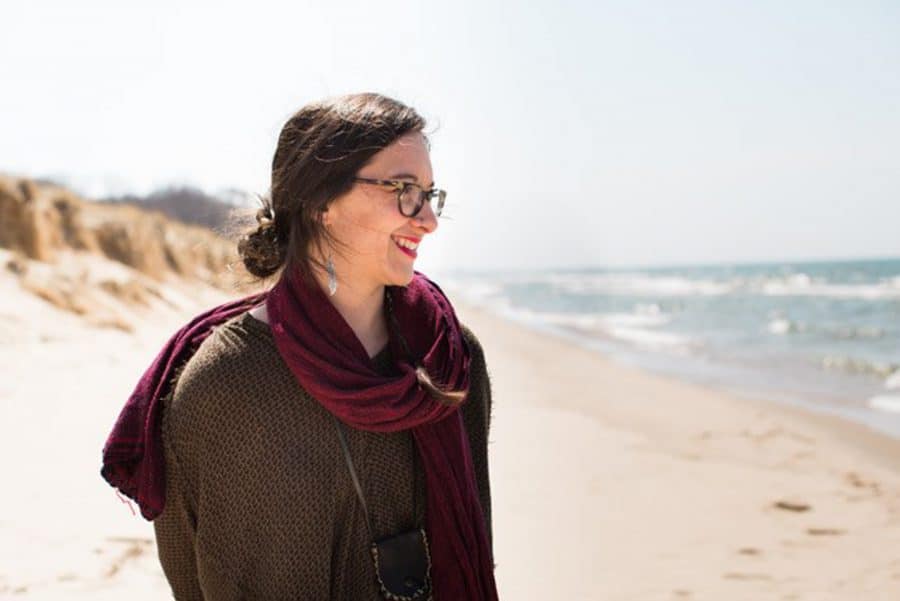 Words act as a source of inspiration and provide a sense of grounding for Citizen Potawatomi Nation tribal member Kaitlin Curtice. After the birth of her first son in 2011, she began writing professionally through her blog and published her first book titled Glory Happening: Finding the Divine in Everyday Places in 2017. Its success helped encourage Curtice to continue writing, and she recently completed the first draft of her second book. Its working title, Native: The Origins of God, The Origins of Us, plays on the sense of belonging.

Set for release summer 2020, it incorporates her viewpoints as a Christian and Native American woman living in the 21st century. Her style – a mix of essays and poetry – draws readers into her words, and she pulls inspiration from her Potawatomi roots to find meaning and help define the world’s interconnectedness.

“The book follows our flood story,” Curtice said. “It’s kind of like that journey of beginning again — how the Earth was formed, beginning on turtle’s back and with the muskrat. That story guides the whole book.”

In the Potawatomi flood oral tradition, animals came to the aid of Nanabozho (Original Man). As he floated on a log, he could not see land anywhere around him. Each creature but one tried to swim to the bottom and capture dirt for Nanabozho to build his home, but they all failed. Finally, Sheshko (muskrat) offered, but all the other animals laughed because of his small size.

Muskrat ignored their taunting and swam for a very long time making the other animals and Nanabozho worry. Eventually, he rose to the surface lifeless with dirt clenched in his hand. Turtle then offered his back to lay the earth upon, and a new land mass formed known by the Potawatomi and other Native Americans as Turtle Island.

Curtice uses the oral tradition to discuss the opportunities that exist to find faith in renewal.

“It’s kind of working through that journey of when a flood happens, when things get really bad, and then we have to start over again,” she said. “And the way Earth was started again, how do we find hope in that process?”

Curtice grew up in Oklahoma where her father worked for the U.S. Bureau of Indian Affairs, and after he accepted a new position with the BIA, the family moved to Pueblo reservations in Pojoaque and Los Alamos, New Mexico.

“Being a Christian but also being Potawatomi, I think that my childhood was a blend of those two things in so many ways,” Curtice said.

In her youth, Curtice was aware of her Potawatomi heritage; however, she held very little connection to the Tribe.

“That’s where my journey is right now is just trying to understand who I am,” she said. “How our childhood shaped us is a really important conversation to have as adults, and it forms a lot of what I do.”

After Curtice moved from New Mexico to Missouri, her parents divorced, but her faith and Potawatomi roots influenced her life and career.

Although Glory Happening: Finding the Divine in Everyday Places included more emphasis on storytelling, her newest venture focuses on conversation.

“When you write a book, it kind of takes you on a journey, but it forms a life of its own,” Curtice said. “As I was writing, I felt like it was just taking me with it instead of me directing everything.”

She highlights the opportunities Christians have to discuss negativity, both past and present, and find healing. She also features the Potawatomi forced removal on the Trail of Death and its continued impact on her and her family’s lives.

“The second book was a lot harder to write because of the content — it’s difficult to write about the hard parts of history,” she said.

“It’s really important for me as I share my journey to let people know this is my story of belonging and what it means and my identity and also connect back with my people and my Tribe.”

As an author, mother to two boys, wife, church leader and public speaker, Curtice has learned firsthand the importance of setting boundaries and employing self-discipline to reach success.

“Talking about hard topics like injustice or oppression can be really heavy, and it can be very difficult. So, having self-care and having things like prayer and ceremony — learning our language has been really amazing,” she said.

Curtice and her sons use various online sources provided by the CPN Language Department to pick up Potawatomi.

“I live in Atlanta, so being able to go online and study our language has been so uplifting spiritually for me and has really helped ground me as I write, and so that’s something I learned about myself is that our language can carry our culture,” she said.

Her husband, who works in academia, also has a busy schedule. They utilize collaboration to propel the family forward and attempt to set a good example for their children.

“We really share our journeys with each other, and that means a lot because they can see what I am doing and they see why it matters,” Curtice said. “These three guys really support me a lot, and I’m really grateful for that.”

Through her writing and public speaking engagements, Curtice focuses on informing others that her story, like the people who make up Indian Country, is unique. She includes quotes from Native Americans throughout to help lend a voice to fellow Indigenous authors.

“I don’t believe that I do any of my work alone. It is always connected to community and to other people — we have to do it that way,” she said. “It’s that kind of communal thinking that has been really important for me. Whatever I do, I have to do it in a way that lifts up all Indigenous people.”

Curtice’s second book is set for release sometime next year, and she looks forward to the opportunity for others to read her story.

“It’s going to be a really interesting thing because (the book) is my journey as being a Christian and being Potawatomi and what that looks like for me,” she said. “I hope it opens up some really important conversations within the church and those who maybe don’t know a lot about us, and I hope this helps them start on a journey to asking really important questions.“

Learn more about Curtice’s upcoming projects and read her blog at kaitlincurtice.com.