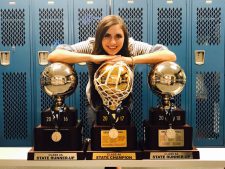 Throughout Ali Brzozowski’s life, she has accomplished a lot on the basketball court. The 6-foot-2 post wrapped up her Harrah High School basketball career this year with an impressive 24-4 record.

This summer, Ali represented the Citizen Potawatomi Nation in the 2018 Oklahoma Native All State Association’s basketball game at Bacone College in Muskogee, Oklahoma, where she received MVP recognition. Additionally, she has competed in the Oklahoma Girls Basketball Class 4A State Championship game three years in a row and earned a full athletic scholarship to Benedictine College in Atchison, Kansas.

“When I visited Benedictine, it was the most beautiful campus. I loved it. It had a great community, and everyone was so nice,” Ali said. “I thought it was the perfect fit for me.”

Ali’s sister, Grace Brzozowski, is a guard on Benedictine’s women’s basketball team. During Ali’s Benedictine tryout, Grace joined her on the court.

“It was really nice to have her out on the court again and be with her. So when she signed, it was just really, really exciting. Now we get to do that all over again,” Grace said. “When Ali and I played in high school, we just played really well together. It’s kind of like how twins have that twin connection? I don’t know if it’s real, but we just have a really good connection.”

The sisters played their last high school game together in 2016 at the state finals.

“I was a senior while Ali was a sophomore, and we actually lost in the finals,” Grace said.

Ali, although devastated, used the loss as fuel. In 2017, she led the Harrah Panthers to a 54-47 win over the Ft. Gibson Tigers, earning the 2017 Oklahoma Girls Basketball Class 4A State Champions title.

“Persevering through that loss helped us make it and win the championship that next year,” Ali said. “It was something my teammates and I worked for our whole lives.”

At Benedictine College, Ali will study biology, and plans to attend graduate school or begin a career in the medical field after graduation.

“I think working for the Center for Disease Control would be very cool. I’d love to do that,” Ali said. “I even thought about physical therapy as another potential path to go down. It would give me an opportunity to work with people.”

When not at the gym, Ali enjoys playing games, shopping, watching movies and listening to music.

“I love playing trivia games, especially if it’s classical literature, music, movies or shows — anything entertainment I am really good at,” she said.

She looks forward to beginning her college basketball career and playing with her older sister Grace.

“Seeing other people’s passion for the game of basketball inspires me,” Ali said. “My siblings, my coaches and my teammates always push me and inspire my drive.”