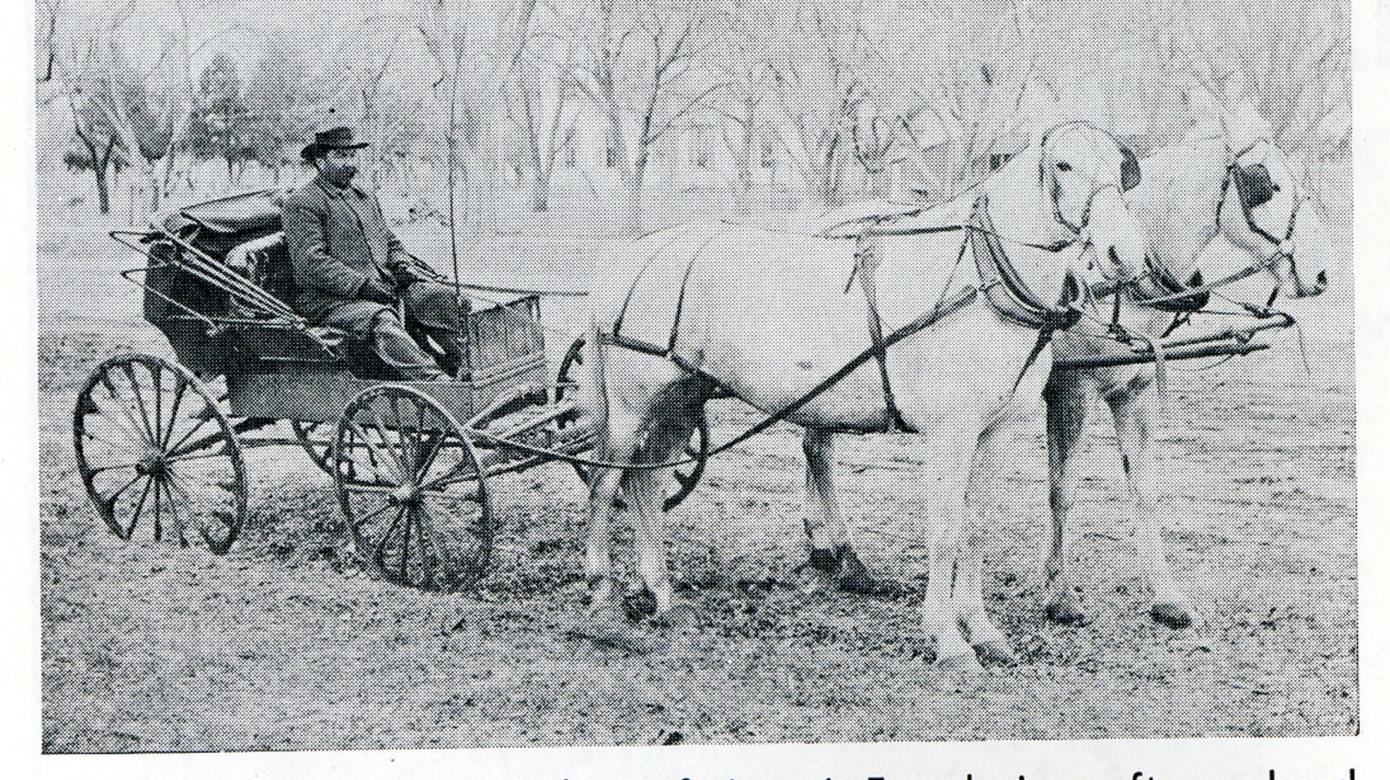 Abe Lafromboise, father of Anna Lafromboise, spends a hard day driving the mail route through the mud in Silver Lake, Kansas, in 1913.

The roots of the Lafromboise family extend to present-day Chicago, Illinois. Potawatomi chief Joseph Lafromboise (1798-1867) also lived near what is now Milwaukee, Wisconsin, as a boy. Joseph appears in The Black Hawk War 1831-1832: Volume I, Illinois Volunteers published by the Illinois State Historical Society in 1970. He is listed with the Potawatomi who aligned with the U.S. Army against the Sauk. They were under the leadership of Wau-bon-e-see and Shaw-we-nesse.

Joseph married Therese, who was reportedly French, Creek and Chippewa. Therese was born around 1808. Joseph received $441 and land under the terms of the Treaty of 1832, and the family lived at Skunk Creek, Will County, Illinois. Together, Joseph and Therese had Joseph Jr., Therese, Jean Baptiste, Ambrose, Michel, Francis, Margaret, Monique, Madeline, Julia, Abraham and Zozette.

The federal government had begun pressuring Native Nations, including the Potawatomi, to leave their holdings in Michigan, Indiana and Illinois. The Potawatomi concluded a treaty in Chicago on Sept. 26, 1833, selling 5,000,000 acres on the left bank of the Missouri River. Joseph received $4,200. The family moved to Council Bluffs, Iowa, where they lived from 1835 to 1844. Treaty terms had promised the land would be inhabited by the Potawatomi forever.

After the Potawatomi had built a solid foundation in Kansas, the U.S. government again began pressuring the Potawatomi to move so their lands could be opened up to settlement and the railroad.

Both Abraham Lafromboise and his wife, Florence, were Oklahoma allottees. They were the parents of Joseph, Roy, Floyd and Anna. Roy later married Lillian Watson, and they had a daughter together, Cherie Jean Lafromboise. Cherie Lafromboise married Thomas Fabian, and they had two daughters, Lisa and Susanne.

Also taking allotment in Oklahoma was Madeline Lafromboise Denton. She was the mother of Zoa, Seymour, Gish, Pearl, Alice and Drew Denton.

Thomas and Therese Watkins lived in Chicago and had two children, Madeline and Joseph. When the Potawatomi left Illinois for Iowa, Thomas resigned from his job and left with the Tribe.

Thomas and Therese had their third child, Louise, who was born at Council Bluffs, Iowa, on March 15, 1843. The Potawatomi again removed, this time to Kansas. When Thomas and Therese divorced in 1844, Madeline and Joseph were placed at the St. Marys, Kansas, school. Louise stayed in Kansas with her mother, Therese.

In 1846, Louise was playing with other children when she was kidnapped by friends of her grandfather and father. Thomas Watkins took Louise to Westport Landing, near present-day Kansas City, Kansas. He eventually took all three children to southern Ohio.

When Madeline and Joseph were older, they decided to return to Kansas and rejoined their mother’s family, finally enrolling as Potawatomi. Louise grew up and eventually reunited with her mother, Therese, in Kansas as well. They had not seen each other in more than 30 years.

Louise and her husband, Albert Nichols, were the parents of Roland A., William J., Fred A., Grace Louise and Paris.

A reunion in Oklahoma

In 1908, Therese was widowed and living in Shawnee, Oklahoma, when she received an unexpected but joyful visit from her grandson Roland A. Nichols. Therese, 86, spent the day relating family history to Roland, which he carefully documented.

Roland Nichols’ fateful visit to his grandmother in 1908 turned out to be fortunate. It was with the help of Therese’s family stories and Roland’s documentation that many of Joseph Lafromboise’s descendants may learn about their family’s history in Chicago. Roland’s documentation is now maintained in the Cultural Heritage Center’s archives.

If interested in assisting preservation efforts by providing copies of Citizen Potawatomi family photographs, documents and more, and to schedule family interviews, please contact the CHC at 405-878-5830. Schedule interviews online at portal.potawatomi.org. Learn more about the Family Reunion Festival at cpn.news/festival, and find research resources online at potawatomiheritage.com.