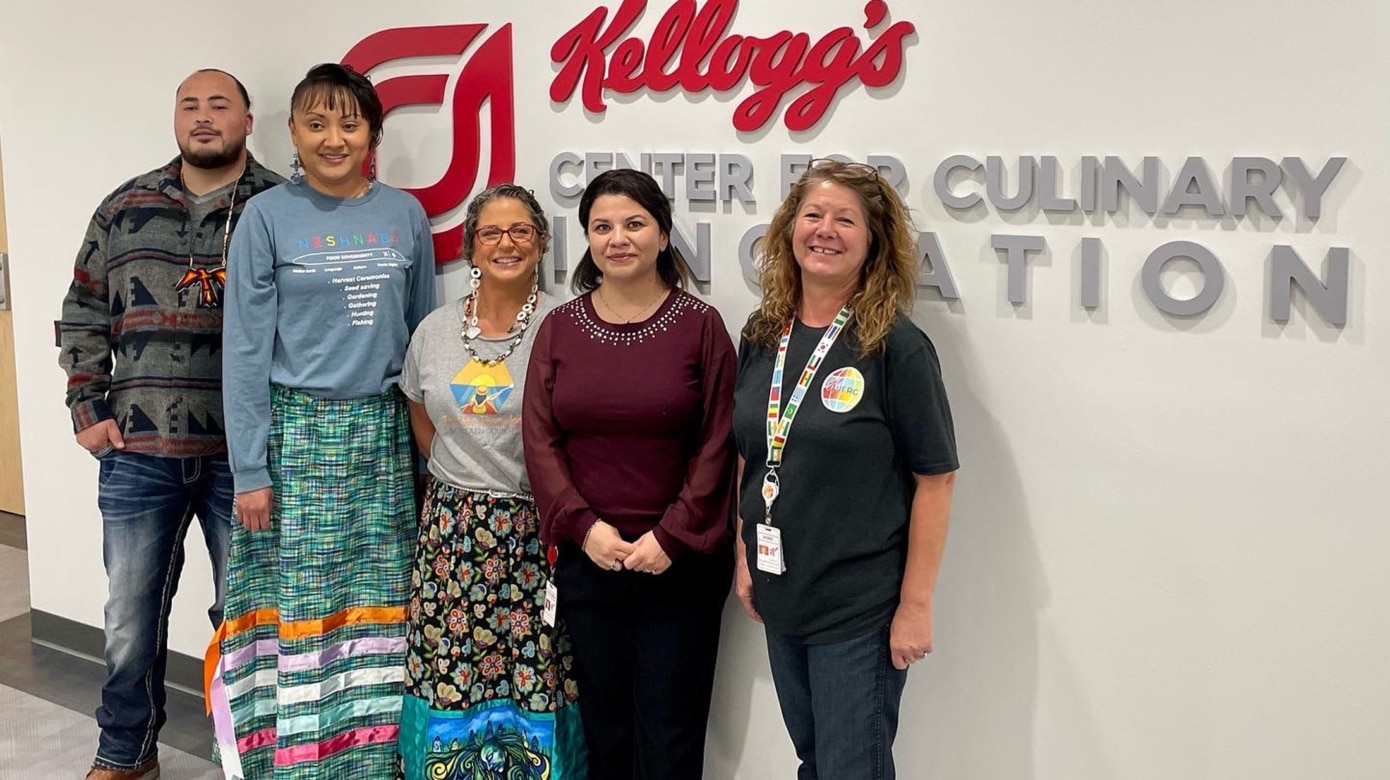 Citizen Potawatomi Nation tribal member Jody Gzhadawsot (Helps Children) Mattena grew up learning to hunt, garden and gather as well as prepare and preserve foods from her grandfather and her mother. She set her sights on a life as a chef from a young age, placing ads in her local newspapers as a child offering her birthday cake-baking services. Cooking nutritious, delicious and culturally important foods for herself and her family remains a centerpiece of her life.

The Navarre family descendant continues to spread her passion for “decolonizing our food, eating food that our body and our DNA recognizes so that we can be healthier, lower our risk of diabetes and heart disease and alcoholism, as well as having the tools to provide food and preserve food for ourselves and our family.” Bringing people together through food empowers her.

In 2020, Gzhadawsot’s TikTok video teaching her daughter how to make fire cider unexpectedly went viral. At the prodding of her daughter, Gzhadawsot decided to share more of her recipes and food knowledge with the internet. The fire cider video was no fluke. She found that people were ready and eager to learn about Indigenous recipes and ingredients and about decolonizing food. She continues to educate more than 30,000 followers through her account, @BossLady_Anish.

Besides cooking, teaching is also a long-standing dream of Gzhadawsot’s. Now, she fulfills both dreams through her BossLady Anish platforms and work with the Nottawaseppi Huron Band of the Potawatomi Food Sovereignty Department as a lifeways consultant. Most recently, her work practicing and educating about Indigenous foodways brought her to the headquarters of one of the largest and most recognizable global food companies — Kellogg’s.

The Kellogg Company originated in 1906 in Battle Creek, Michigan, where the Nottawaseppi still reside today. The company reached out to NHBP Food Sovereignty Coordinator Nickole Keith for a Native American History Month culinary presentation and discussion as part of an ongoing series of monthly cultural education programs for Kellogg’s employees.

On Nov. 2, 2022, Gzhadawsot, Keith, and Kevin Harris, Keith’s brother and cultural lead for the NHBP, travelled to Kellogg Company headquarters and its Institute for Food and Nutrition Research.

Gzhadawsot prepared a meal of Buffalo Three Sisters stew and pumpkin biscuits for about 40 Kellogg’s employees in attendance, followed by a question-and-answer period with Keith and Harris. The presentation was filmed and made available to employees at several other Kellogg’s locations.

The stew and biscuits are staples in her own cooking practice and for many familiar with Potawatomi foods, Gzhadawsot said. She chose them for their ease, centrality in her repertoire and cultural significance.

“If you were to tell a story with just food, I felt like that did it all,” she said. “I like to cook with buffalo and venison the most. That’s our staple protein, besides fish and duck. The Three Sisters, of course, that’s all about our agriculture, our history. We have the lessons of the Three Sisters and how they work together.”

The biscuits rounded out the meal. Gzhadawsot added that she makes this recipe of pumpkin and cornmeal as an intentional alternative to fry bread, which originated from government commodities and contains ingredients such as wheat. She replaces fry bread with more historically, culturally and biologically suitable options in her cooking.

Audience members were particularly interested in two ingredients Gzhadawsot used that most had never encountered before: maple vinegar, which Gzhadawsot uses in nearly every dish to bring out the flavors, and culinary ash, which she uses in dishes with beans or corn to aid with digestion.

“It was so fulfilling to present to Kellogg’s and not only prepare two of my favorite dishes but also to have them so interested in new flavors and types of foods,” Gzhadawsot said. “As an Indigenous chef who never went to culinary school, this was a heartwarming experience.”

Gzhadawsot said the discussion portion of the event opened conversations about indigeneity, heritage and sovereignty — not just for the Potawatomi or those indigenous to Turtle Island, but also for everyone in the room.

“Everyone is indigenous to somewhere on the planet,” she said. “Their family and ancestors are waiting for them.”

Gzhadawsot was also heartened to see the conversation gravitate towards the experience of the Nottawaseppi in the very area where Kellogg’s headquarters have been established, which is also the ancestral homeland for other Potawatomi tribes including the Citizen Potawatomi.

“It opened the door to talk about land back as well as foraging for food, keeping waterways clean for the mnomen (wild rice). It opened the discussion not just for feeding ourselves but getting back to the basics and being able to have your own agriculture and keeping our waterways and our water relatives as well as our plant relatives clean and safe and secure. And I think that they were receptive to that,” she said.

Gzhadawsot noted the grotesque history of the Kellogg Company’s founding and the efforts the company is making to repair some of that harm.

The company, which owns brands such as Corn Flakes, Pringles, MorningStar Farms and Eggo, started in 1906 when William Keith Kellogg split off from his brother John Harvey Kellogg, the lead physician and director of Battle Creek Sanitarium. It was one of the most famous American health spas of the late 19th and early 20th centuries. J.H., a medical doctor, nutritionist and known eugenicist, founded the Race Betterment Foundation that same year in response to what he referred to as “race degeneracy.”

J.H. devised countless regimens for measuring a person’s size, form and physical functions, as well as therapies in service of a method of health reform he called “biologic living.” These projects included personalized, strict dietary regimens for each patient. As he laid out in his 1908 volume The Battle Creek Sanitarium System: History, Organization, Methods, this involved the invention of foods that had precise caloric and macro-nutritional values. Corn Flakes cereal was one such food to come out of this program, and W.K. went on to sell it to the public following its popularity at the sanitarium.

Gzhadawsot was glad to see the gender, racial and cultural diversity of the staff and to learn of ongoing and mutually beneficial partnerships in the Battle Creek area with Indigenous communities.

“I learned that a lot of Indigenous people — a lot of our Potawatomi relatives around there — have either worked for Kellogg’s or had relatives work there. And (Kellogg’s) has helped sponsor many of the schools around there … very diverse and very good (schools), unlike the residential school era that we’re still dealing with today. So, they’ve been doing a lot for the Indigenous community for a long time and in a respectful way,” she said.

“I’m hoping that a really strong bridge was formed between the Indigenous communities and Kellogg’s because together we can do amazing things.”

While she relishes the opportunity to return to Potawatomi homelands periodically through her work with the NHBP, Gzhadawsot believes that Tribal members anywhere can practice important elements of food sovereignty and decolonization.

She encourages everyone to “acknowledge what you put in your body, what you’re feeding your families.”

One way to practice this is through experimenting with wheat, dairy and alcohol-free diets for a week or a month and noting the effects.

She credits the removal of wheat and dairy from her diet with relief from the pains of Celiac disease and an improvement in all-around health.

“My whole life changed,” she said.

Gzhadawsot also emphasizes that community is a central aspect of food sovereignty and well-being.

“I think some of us get discouraged because we think we have to do it all — (that) we have to be hunters, gatherers, foragers, planters, do all of the food, and we forget that it’s all about community,” she said. “We were never people to live solitary lives. Everything revolves around community. So find people to trade with. … Practice the honorable harvest as well as reciprocity. Don’t just take; you’ve got to give back. But don’t think you have to do it all by yourself. It’s a community thing.”

Gzhadawsot looks forward to releasing a cookbook in 2023 and continues to educate online through her website and social media platforms. Follow her work at bossladyanish.com, @BossLady_Anish on TikTok, and @BossLadyAnish on Facebook and Instagram.