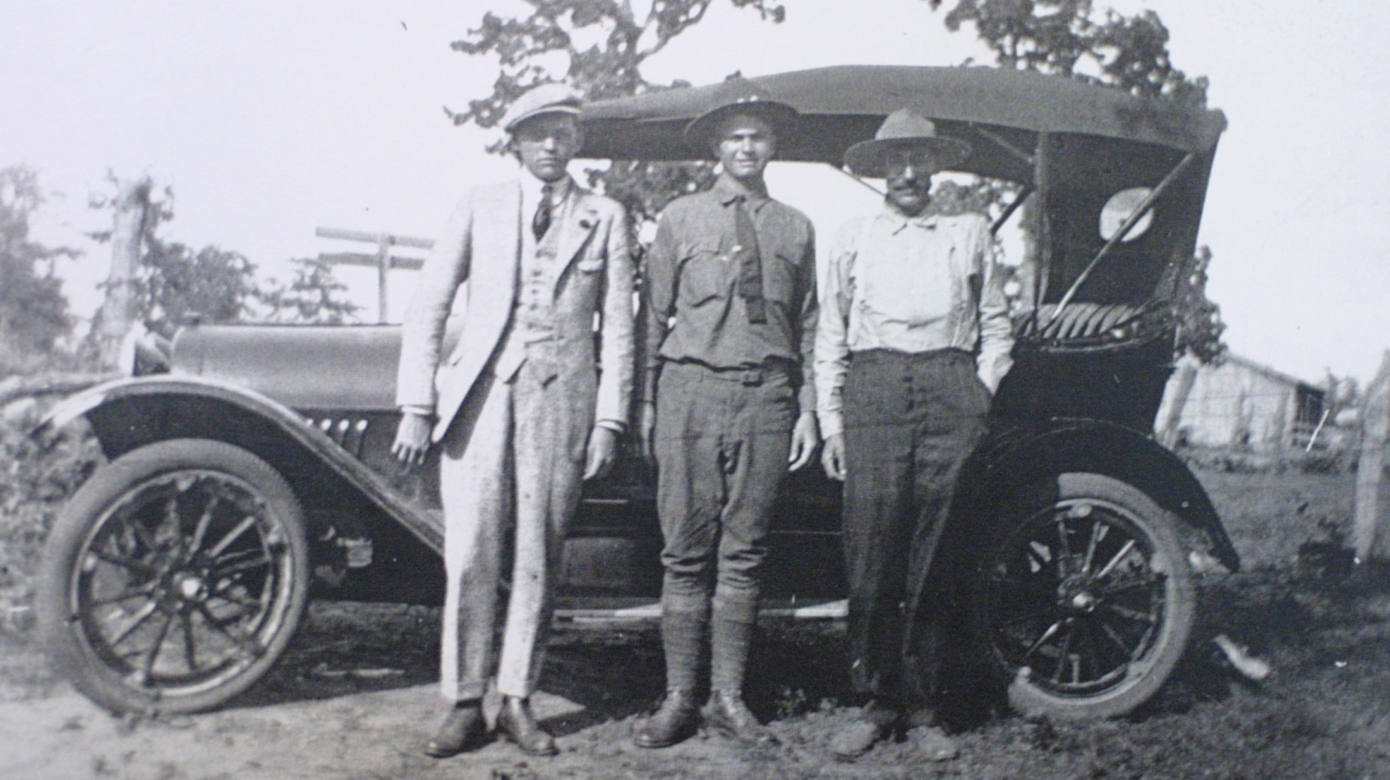 Documents from the Cultural Heritage Center archives show a legacy of leadership and public service within the Johnson family. Jacques Vieux (1757-1852) was chief fur trader with the Hudson Bay Company. Fur trading along the west shore of Lake Michigan put Jacques in contact with many Tribal nations, including the Potawatomi. Jacques, a non-Native, had married a Potawatomi woman, Angeline LeRoy (1784-1862) at Green Bay, Wisconsin. Angeline was the niece of On-au-ge-sa, a Potawatomi chief. Jacques and Angeline had a son named Louis.

Louis Vieux, Sr. (1810-1872) assisted and then succeeded his father as chief fur trader. Louis met his wife, Sha-note (Charlotte) in Michigan. Sha-note (1820-1857) was the daughter of Che-shaw-gan, a prominent leader among the St. Joseph Potawatomi. After Louis and Sha-note married in about 1830, they moved near present day Milwaukee, Wisconsin. Their children Madeline (Nadeau) and Jacob “Jake” were born there.

When the U.S. government forced the Potawatomi from their ancestral homelands under the Indian Removal Act of 1830, Louis and Charlotte left Milwaukee for Council Bluffs, Iowa, joining other Potawatomi on the United Bands Reservation. Their daughter Sophia was born there in May 1840. The family lived in Council Bluffs for approximately 20 years. During this period, the family grew to include Ellen (Frayer Cooke), Margaret “Arcange” (Nadeau Young), Rachel (Thurber) and Louis Jr.

Louis Vieux, Sr. often acted as an interpreter and helped the Potawatomi during business or government transactions. He was later elected chief. With a keen business sense, he was also known for his fair treatment of all and his generous nature.

As the government in Iowa began to push for statehood, the Potawatomi were again forced to relocate. In 1846, the family joined others leaving for Kansas. They settled in Indianola, near present day Topeka. Here, they lived in wigwams before they built a house. In Indianola, the Vieux family began farming and raising stock while Louis continued helping with Tribal business or assisting those who were sick or needed help. The Vieux children kept busy with cooking, milking their cows and gardening.

From Indianola, Sophia Vieux journeyed in a wagon to St. Marys, Kansas, to attend school. She later became sick at age 13 and could not continue her education. After she returned home, she met Jacob Johnson, a restaurant proprietor. They married June 9, 1856.

Sophia’s mother, Charlotte, died the following year in 1857. Sophia’s father, Louis, moved to Vermillion, Kansas, and kept the toll bridge over the Kansas River. Jacob Johnson was one of the toll bridge operators. Louis also sold supplies like grain, hay and livestock to Fort Riley and to wagon train travelers. Louis lived until 1872. When he died, several hundred people attended the funeral to pay their respects.

Jacob Johnson moved the family to Rossville, Kansas, about 1861 where they farmed wheat, cattle and hogs for 11 years.

The Johnson family lived for a brief time at Sacred Heart but later built a two-room log cabin near present-day Wanette, Oklahoma. Here, Jacob opened a general store. Not long after, he experienced a setback when his cattle herd was stolen. This, combined with the extension of too much credit at the general store, financially ruined him.

The family moved back to Sacred Heart in 1876. By 1887, the Johnsons were back on their feet, living near Sacred Heart where they built a log home. There, they found stronger financial footing by farming corn, hogs and occasionally, cattle. Combined with the wild deer, turkey and prairie chickens, they enjoyed some stability.

Sophia’s son Richard later left home to become a mail carrier along the Red Fork River near present day Sapulpa, Oklahoma. He never married. Rachel was employed for a time at the Friends Mission. Lawrence remained at home while James, Sarah and Andrew entered the Friends Mission as students. Sadly, James died while a student there.

In 1883, the family moved to a location near present day McLoud in Pottawatomie County. Sophia Johnson spent her golden years on her allotment in a five-room cottage built for her by her children.

A dedication to educating Indigenous people

Also within the Cultural Heritage Center archives are the recollections of Jacob and Sophia’s daughter, Emma D. Johnson Goulette, written on Sept. 24, 1911, when she resided at 507 N. Market St. in Shawnee, Oklahoma.

Emma’s name was Duc-qua-was, or Duck Woman. Her grandfather was Lt. James Johnson of Washington, D.C. He was an English captain who left the British forces to join the American colonists during the Revolutionary War.

Emma recalled that her father, Jacob Johnson, left home to seek his fortune in California in 1848. After prospecting for gold, he conducted a food caravan between Omaha, Nebraska, and the California gold fields to supply a general store he opened. Jacob eventually settled in Kansas as the proprietor of a hotel where he met and married Sophia Vieux, whose Potawatomi family had moved from their Wisconsin homelands to Iowa and eventually to Kansas.

Emma’s parents were among the 1,400 Potawatomi who accepted allotments and eventually settled in Oklahoma. Emma was born in Indian Territory and at age 8, went to Chilocco Indian School, learning housekeeping and dressmaking. She later taught sewing.

Emma attended Arkansas City, Kansas, public schools and graduated from the literary department at Chilocco as valedictorian. She later attended Carlisle Indian School and received a scholarship to attend teacher training in Philadelphia, Pennsylvania. She graduated in 1896, receiving a Principal’s Certificate and a certificate for teaching kindergarten.

She began her teaching assignment on Sept. 1, 1897, at the Quapaw Indian School in northeastern Oklahoma. Emma said she was encouraged from childhood to “teach your own people.” She took that advice to heart, teaching 200 students on the Apache reservation in San Carlos, Arizona. She later was an assistant principal at the Phoenix Indian School with 700 students. Emma went on to work as a principal at schools serving the Pima, Pueblo and Navajo nations.

The Johnson family maintained their legacy of service. Years after the family left Kansas and endured hardships while making a life in southern Pottawatomie County, they eventually settled in Shawnee, Oklahoma. Later, during the 1932 Oklahoma Dust Bowl and Great Depression, some family members relocated to California.

Richard “Dick” Johnson was a veteran of both World War II and the Korean War. He was born Dec. 15, 1922, in Tecumseh, Oklahoma, to David P. and Kate (Fansler) Johnson. Dick was known as the family historian and was instrumental in providing family documents for the CHC’s archives.

During his military service, Dick served as a scout during WWII. He was severely wounded during the Battle of Pork Chop Hill during the Korean War and received a Purple Heart and a Bronze Star for his valor in Korea. Richard “Dick” Johnson walked on April 1, 2012, at the age of 89.

Dick’s son, District 7 Legislator Mark Johnson, continues the family legacy of service. He was elected to his seat in August 2010. His name is Wisk Mtek (Strong as a Tree).
A native of Sanger, California, Mark Johnson began as a volunteer firefighter and served the public for more than 40 years in the California Department of Forestry and Fire Protection and other agencies.

“Being able to help people, I think, is what drew me to (fire protection). And you deal with a lot of people on their worst day, and you try to make it better, and that’s what I’ve tried to carry forward in my service as a legislator,” Mark Johnson told the Hownikan in a September 2022 interview.

Both the Vieux and Johnson families have contributed to the solid legacy of leadership and service first begun by Louis Vieux, Sr., passed to his daughter, Emma Johnson, and continued today by Mark Johnson.