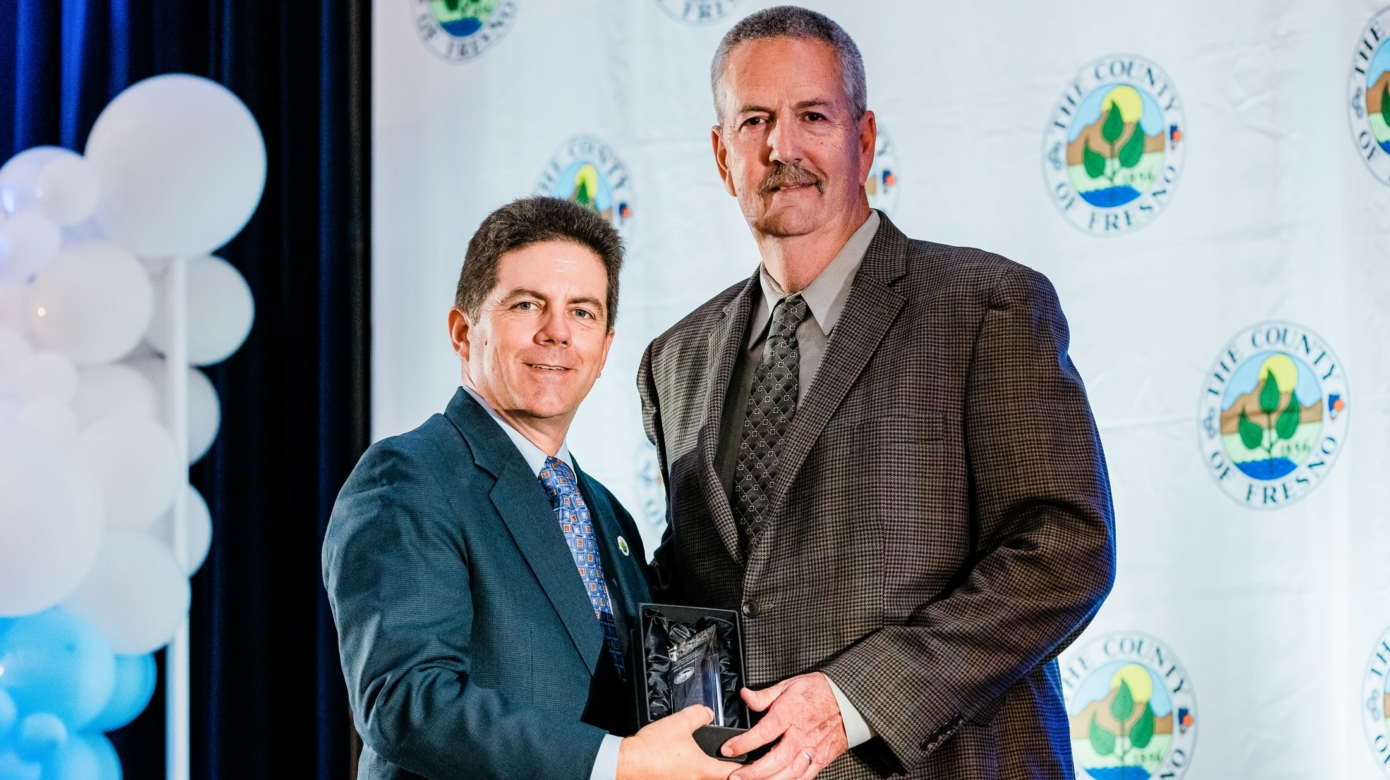 Citizen Potawatomi Nation District 7 Legislator Mark Johnson spent more than 40 years as a firefighter in California. He retired as the Unit Chief for the Fresno-Kings Unit of the California Department of Forestry and Fire Protection (CAL FIRE) in December 2020 and Chief of the Fresno County Fire Protection District one year later. Throughout his career, he saw some of the worst wildfires in state and national history and helped countless people on the worst day of their lives.

The Vieux and Johnson family descendant now spends his retirement with his wife Rita caring for their land, animals and family. In early September 2022, Fresno County named him the recipient of the Public Safety Hero Award as one of the 2022 State of the County Front Line Hero Honorees.

“It was pretty much a shock. I think I was actually feeding horses, and I got a call that asked me if I would come accept that award. I said to them when I accepted it, ‘It’s a whole team. It’s not just me. I was the one that was lucky enough to be leading them at the time.’ I was grateful for it,” Johnson said.

“He’s very humble about it, and he’s always believed that it’s about a team,” McDougald said. “And he told me, ‘This award is really nice and everything, but the team should be receiving the award.’ That’s a pretty humble thing to do, but that’s just the kind of person he is.”

Fresno County Fire Protection District 5 Supervisor Nathan Magsig nominated Johnson in recognition of his career spent giving back to the community, which he began as a volunteer firefighter at 19 years old. District 1 Supervisor Brian Pacheco spoke during the video as a member of the selection committee.

“In selecting the frontline hero award, Chief Mark Johnson immediately came to mind because those of us in leadership positions, we make decisions all the time,” he said. “Chief Johnson’s decision literally saved the community of Shaver Lake.”

Shaver Lake sits in central California’s Sierra National Forest with a population of approximately 700. It was nearly destroyed in 2020 during the Creek Fire, which burned a total of 379,895 acres between early September and late December. Johnson and his team used the wind to their advantage and set a backfire to stop the blaze from reaching the small town. It is the fifth largest fire in modern California history.

“There’s always a risk because these large fires like that create their own weather system. You just do what you’re trained to do and carry on the best you can. There was a lot of people involved in that. … It worked out the way it should have. And that community’s still standing there today. It was a good effort by everybody involved, and it was a win,” Johnson said.

In the aftermath, Valley Public Broadcasting Service and documentary filmmaker Jeff Aiello began interviewing first responders, residents and others involved with the fire. The first episode of Afterburn: The Creek Fire Documentary aired Aug. 18, 2021. The program focuses on the first 96 hours of the blaze, which covered 20,000 to 50,000 acres.

Johnson served as an expert for the documentary and agreed to an interview about his experience and leadership.

“It’s nothing that any of us (first responders) really want to relive or rehash or talk about too much. But I just wanted to make sure that the story was told as accurately as it could be and that people could understand what went on, what people went through,” he said.

In June 2022, Afterburn won an Emmy for Best Documentary — Topical from the San Francisco/Northern California Chapter of the National Academy of Television Arts & Sciences.

“That was a cool time,” Johnson said. “I was glad to see when those folks put so much work into something like that that it’s recognized.”

The Creek Fire was the biggest fire Johnson encountered in his four-decade career, and he said many people of the area still deal with the trauma today. He attributes his CAL FIRE team with the strength and resilience that saved people’s lives. Johnson wanted to be a firefighter since he was 7 years old and still feels it was the only path for him despite the hardships.

“Wouldn’t trade anything for doing it. I’d do it all over again. It’s just a great career. And I would encourage anybody out there that is looking for a great career where they’re in public service and doing things for other people and stuff like that to look at the fire service,” he said.

CAL FIRE Division Chief Jim McDougald congratulated Johnson one last time on winning the Public Hero Service Award during the video played at the ceremony, summing up his colleagues’ thoughts.

“There’s not a better person that’s more deserving than you for the time you spent as a chief of CAL FIRE and Fresno County Fire Department,” McDougald said. “You did a lot of great things in Fresno County, and your legacy will live on.”