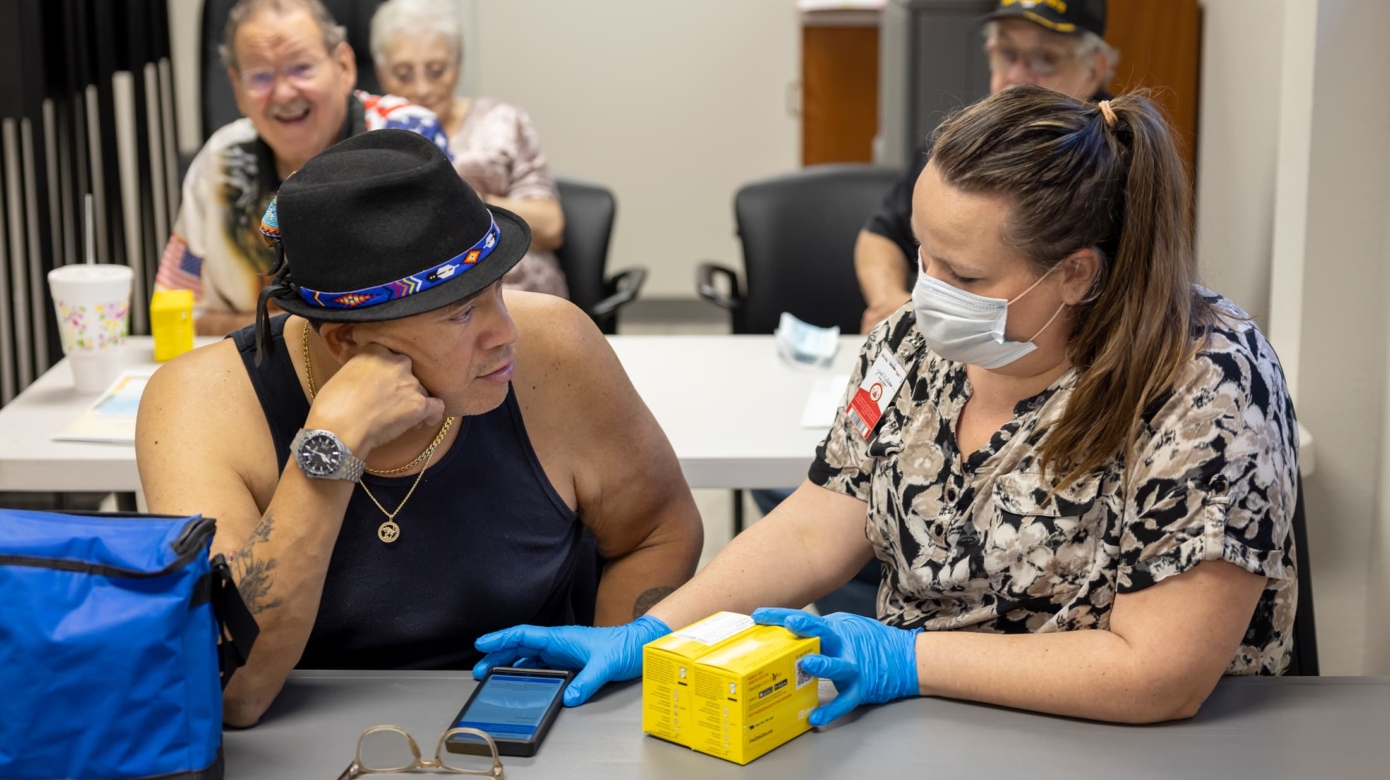 November is National Diabetes Month, and the Citizen Potawatomi Nation Health Services Diabetes Program and pharmacy improved their offerings in 2022 to help patients manage their disease.

The Centers for Disease Control and Prevention released its most recent National Diabetes Statistics Report in January 2022. It noted that American Indian and Alaska Native populations had the highest percentage of adults diagnosed with diabetes of all racial and ethnic groups at 14.5 percent.

“That’s my favorite part about it — working with the Native American population, working under our grant or working with (Indian Health Service) facilities — we’re truly able to address any disparities that there are or provide the tools or resources that our patients need,” she said.

CPN’s diabetes program recently upgraded some of its curriculum, began offering new technology for easier glucose monitoring and shifted to a community-based approach to care.

The diabetes program dedicates Mondays to its five-week Building Education About Diabetes (BEAD) classes. Attendees begin and end with the same group, which helps patients feel heard and discuss their condition with someone outside of family and health care professionals.

“They’re able to establish rapport with one another and build friendships or maybe have someone that they can partner with that has gone through the same things they are,” Brown said.

“I think anytime you can get a group of people together, it’s a good thing. I think we’re meant to live in community. I think we see that in the Native American culture.”

CPNHS welcomes all patients with diabetes to take the class, regardless of when they were diagnosed. The curriculum is accredited by the Association of Diabetes Care and Education Specialists and covers medication, nutrition, physical activity, stress management, problem solving, disaster planning and alternative medications/medicines. Brown also enjoys covering trending topics such as the keto diet and artificial sweeteners as well as potential serious outcomes of mismanagement.

“I hear all too often, ‘I knew someone that had diabetes, and this happened to them,’ or ‘They lost a toe or had problems with their vision’ and things like that. Our goal is obviously to avoid any of those things. … I truly believe the saying, ‘An ounce of prevention is worth a pound of cure.’ And diabetes complications is one of those things. We don’t have to have foot problems or eye problems or kidney problems,” she said.

BEAD empowers participants to self-advocate during regular health care visits and request periodic screenings. They also cover diabetes myths and how to deal with information overload. As an educator, Brown focuses on the topics important to the patients.

“BEAD I really feel like helps people in a very individual way. Even though we’re giving a standard curriculum or a standardized process, the goal is to always individualize our care,” she said.

On Fridays, the diabetes program offers classes on continuous glucose monitors (CGMs). The three-month course welcomes patients to familiarize themselves with CGMs as an alternative to traditional finger sticks for tracking blood glucose levels.

“We are following what we know works well, but also adapting it to work best with our clinic. I have good experience with (CGMs) working well in the community setting and the Native American population as well. And we’re excited,” Brown said.

Attendees wear the CGM on the back of their arm and use their smartphone to pull real-time data about their sugar levels through an app. However, for those without a phone or with one that lacks compatibility, the diabetes program offers handheld glucose readers as well. Brown highlights the new monitors’ ability to give participants more control and information.

“We find that patients are getting real-time data versus coming into clinic and getting their glucometer downloaded from 90 days ago and someone asking them what they did two months ago for breakfast. And this allows for real-time data, immediate cause and effect, and it also helps patients make food choices,” she said.

In the beginning, the class meets every week to give patients a grasp on managing the technology. After four weeks, it meets every two weeks for the remaining two months to switch out sensors and follow up.

“By the end of it, the goal is for patients to replace them on their own because after the program, they’ll be able to continue to get their sensors in the pharmacy, and they’ll just replace them at home. But they’re super user friendly,” Brown said.

She and attendees also cover nutrition, physical activity and medications as well as their effects on the data from their sensor. She plans to expand the program within the next year and believes CGMs hold a prominent place in the future of diabetes care.

“I remember taking my exam to become a certified educator, and that same day I said, ‘I believe in my career, we will see sensors completely replace finger sticks.’ And I think we are all ready and excited for that day,” Brown said.

CPNHS’s pilot program for CGMs ends this month. Patients can join a waiting list for the next class now.

“We have a lot more options than the typical (Indian Health Services) facility, in general. So, our doctors have been really good at adding top-of-the-line, new medications for diabetes,” she said.

In September 2022, NPR’s Morning Edition reported that insulin costs have increased 600 percent over the last 20 years, noting that some patients with diabetes have resorted to rationing their supply to avoid out-of-pocket costs. Southern relishes the ability to give patients their life-saving products with no co-pay. CPN carries almost every brand and type of insulin.

The pharmacy also assists those with the new CGMs and provides the necessary replaceable parts. Southern wanted the ability to show patients how they work and answer any questions or find solutions to problems with the technology.

“I personally wore one for 14 days so that I could experience and know what the patients are going through, and you don’t even feel it in the back of your arm,” she said

For her, success in treating diabetes is rooted in education, and Southern encourages patients to ask their doctors or pharmacy staff any questions regarding their treatment.

“We want to get it to where everyone can understand what their meds can do for them and what power they have in their hands being in this situation where they are allowed to get their medications here,” she said.

The pharmacy also offers mail order services to Citizen Potawatomi patients over 63 who live outside of Pottawatomie County.

Southern began working for CPNHS 23 years ago, and the changes in diabetes care and the Tribe’s dedication to remain at the technological forefront amaze her. Although Brown began with the Nation less than six months ago, she feels the same.

“It is really nice to work here. Our patients have what they need, and in the event that they don’t, we have resources and we can get them what they do need,” Brown said.