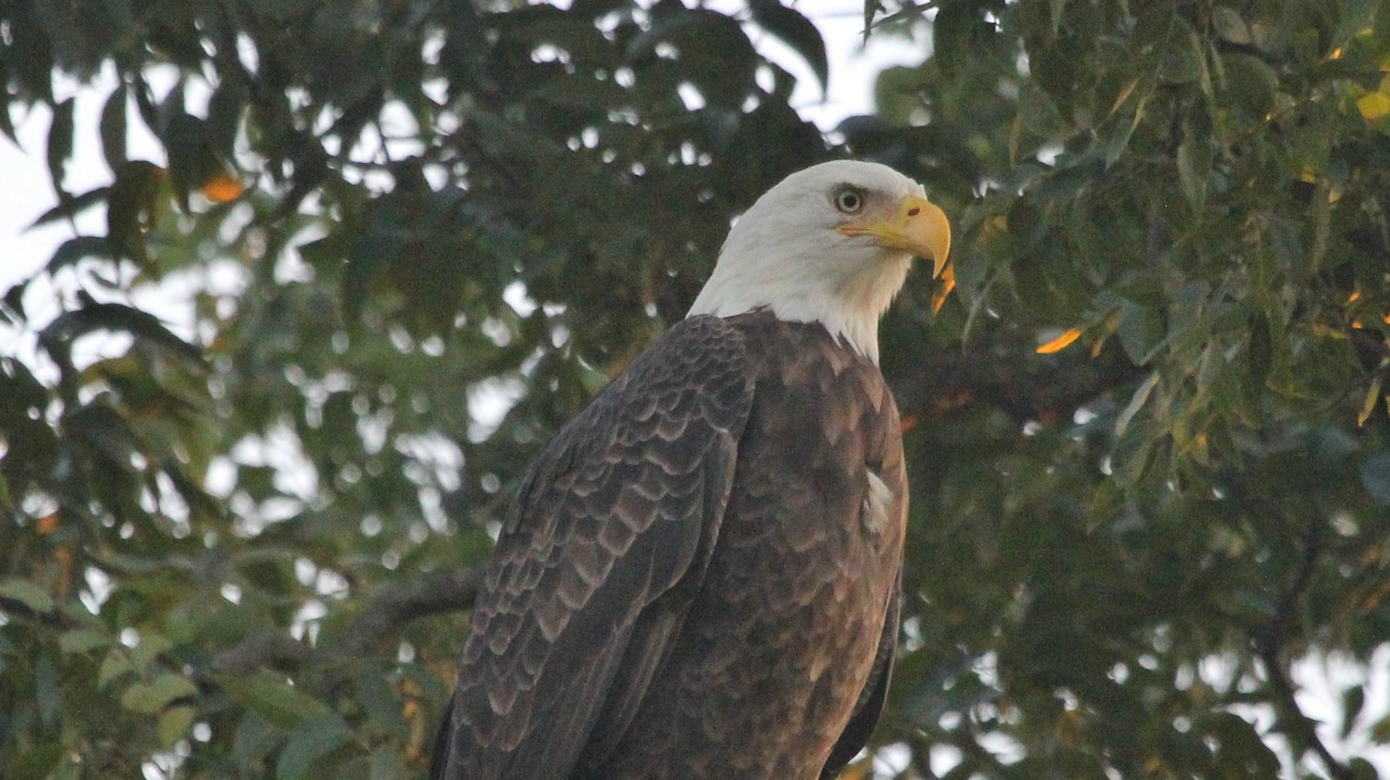 Wadasé Zhabwé takes in the view of the CPN Eagle Aviary. (Photo provided)

The end of September in Oklahoma still felt like summer days when the fall equinox arrived, and the landscape was greener than you would expect for our lack of rain. Even though it might not have felt like fall, the trees had begun to subtly give way to yellow and gold as the evenings cooled. Every day, the sky was filled with more and more migrating birds.

The Mississippi Kites of summer that seemed to be everywhere just days ago were all gone along with the swallows as they followed the insects migrating south. A few summer holdouts that also rely on insects, like the Scissor-tailed Flycatcher, hung around a bit longer while the grasshoppers were still abundant. Turkey vultures, hawks of all kinds, gulls, geese and even monarch butterflies were headed south in droves. The previous week, the eagles at the Aviary kept looking up like they were watching something above them, but to the naked human eye, it was just clear blue skies. To our surprise, with binoculars, we could see dozens of Swainson’s hawks above us and a multitude of other birds even higher that were hard to identify at that height. The sky was full.

Every season has its own unique activities around the aviary. Fall is a welcome break from Oklahoma’s summer heat for the wildlife and people. We do most of our tours in fall and spring, and with school back in session, we host many school programs as well. However, we also begin preparing for the seasons to come. We collect and dry wildflower seeds to sow next spring. We start monitoring several local eagle and hawk nests as pairs begin to return to the area and prepare for nesting season. We start thinking about winterizing enclosures and gathering those materials needed and complete any necessary maintenance. We gather nest material. We watch for Wadasé Zhabwé.

For those that might not know her, Wadasé Zhabwé is a bald eagle we were able to release on April 16, 2013. She was banded and fitted with GPS telemetry. She wore it for nearly seven years, but not long enough for us to determine a nest site. You can find more info about her online in the Hownikan at potawatomi.org.

That might be one of the most asked questions we get during tours of the aviary from those that know her story. “Where’s Wadasé?” During a recent tour, a local school group of third graders suggested we create a Where’s Wadasé book to rival Where’s Waldo. As funny as that might sound, often that is exactly how it feels searching for her in places with new nest sites or reported eagle sightings near her last recorded telemetry points. After all this time, armed with thousands of points and data in concentrated areas over the year before, we lost the ability to track her GPS. We have yet to positively identify her away from the aviary.

It’s hard to believe we saw her on the aviary grounds on 176 days of the first year of her release. Her time here decreased annually as her confidence and independence grew. Now we offer sema (tobacco) for her daily and hope to catch a glimpse of her each fall. Toward the end of September, each previous year, she has made an appearance just as the seasons start to change. She rarely stays for more than a day or two now. This year, we had seen the resident pair of eagles from the locally famous 13th Street nest and another pair that frequented the area over the past several years, Martin and his mate (aka M&M), but not Wadasé.

The afternoon of September 22, we finished chores around the property and drove the golf cart down to feed the eagles. While we had seen a pair of eagles earlier in the day flying out above the river, none had come in close enough to identify. We parked near the food room and discussed feeding and plans for the following day when we were startled to hear an eagle chattering nearby. The sound was coming from the opposite direction of the enclosures and nearly right above us. We carefully leaned out of the golf cart to locate exactly where the sound had come from and could hardly believe our eyes. There was an adult eagle with a silver leg band sitting in a pecan tree just 20 feet from us. Wadasé was home! Trying to retain any sort of composure, we hurried to the office to retrieve a camera. To be honest, the first 50 photos were just a blur from adrenaline and both our hearts pounding out of our chests.

After we spent a good deal of time just marveling at her, we fed the eagles and, as always, offered her food on her old platform. She sat, one foot hanging out, relaxed, for a good while before making a short flight around the pasture and landing high up in the big pecan tree out by the prayer circle. From that vantage point, she could see the entire property, and she seemed content to share the space with us. We sat with her as the sun set and the light faded, and all our photos became silhouettes. The resident great horned owls could be heard calling in the distance. She softly chattered a few times in response as if to let them know the tree was occupied for the night.

We could hardly wait for sunup, and at first hint of light, we scanned the big pecan. She was not on the perch where she had roosted. She was nowhere in sight. Even though it is bittersweet to see her for such a short time, every visit is a blessing. To know she can go anywhere in the U.S. and continues to stop here is quite humbling. We have been fortunate to continue to share her story, and with a little luck, this winter we hope to locate her nest site.

As always, we encourage you to keep your eyes out for Wadasé if you are near the areas she frequents. For more information about the CPN Eagle Aviary visit potawatomiheritage.com. To read previous Wadasé updates, visit the Hownikan at potawatomi.org. Send your encounters with Wadasé or other eagles in Oklahoma or wherever you may be to us at aviary@potawatomi.org. Those reports have been a valuable tool in tracking her progress and locating new nest sites around the state to add to our monitoring lists.