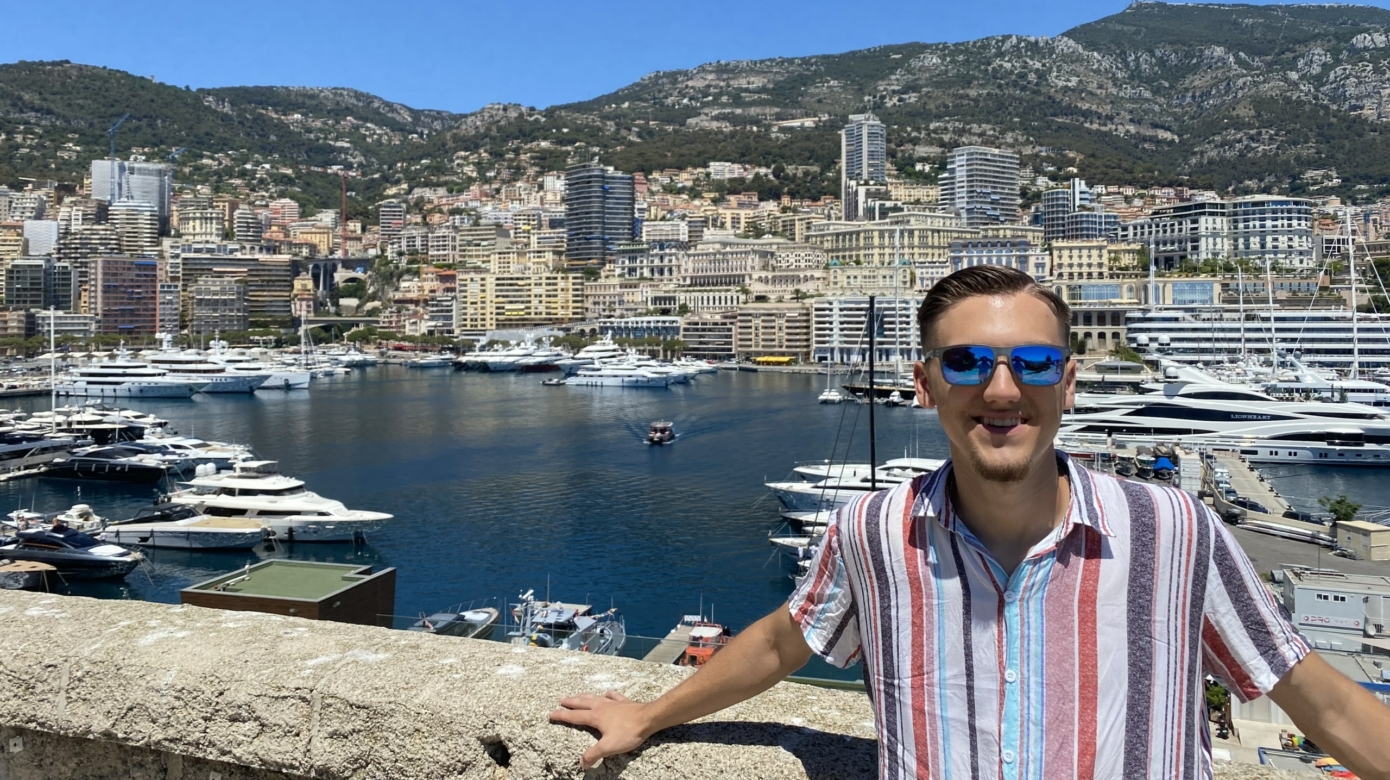 Jake Biddy visited the Principality of Monaco on the French Riviera. (Photo provided)

A Tribal citizen studied engineering in Europe this summer after he was chosen for one of the most competitive and prestigious engineering internships in the country.

Jake Biddy, a sophomore at Southwestern Oklahoma State University, was selected for the International Research Experiences for Students Project offered through Texas A&M University. The program is a partnership between Texas A&M and École Nationale Supérieure d’Arts et Métiers and took place over 10 weeks in Aix-en-Provence, France. ENSAM was founded in 1780 and is among the oldest French institutions and one of the most prestigious engineering schools in France, according to the ENSAM website.

International Research Experiences for Students aims to broaden professional networks, deepen the relationships of a diverse student cohort with the industry and introduce students to international practices in innovation and technology development, according to the Texas A&M website.

The Smith family descendant is majoring in engineering manufacturing at SWOSU. The internship program is very selective, and Biddy was the only participant not attending Texas A&M or one of its campuses. Program interns were selected based on academic performance, application package materials and program goals.

Biddy learned of the opportunity through the Oklahoma Louis Stokes Alliance for Minority Participation. OK-LSAMP is a consortium of Oklahoma colleges and universities working to increase the number of students from underrepresented populations who receive degrees in science, technology, engineering and mathematics, or STEM, according to the SWOSU website. He traveled to College Station, Texas, last April to meet with the internship administration and become more acquainted with the program.

“I was looking for something to do over the summer, and I found this option that paired well with my major,” he said. “I saw it, and I thought it’d be perfect.”

Studying materials used in many industries

The internship placed Biddy with a French student studying coatings. The coatings can be used in a variety of industries.

“I was working with a Ph.D. student on her study over ceramic coatings,” he said. “I was performing tests to see how they reacted under certain stresses, like bending.”

Biddy even evaluated how the coatings performed on a microscopic level.

“It was four-point bend test,” he said. “We used four points of contact to bend a sample that contained this ceramic, and we observed it under a microscope.”

The ceramic material will be used in different industries from aerospace to automobiles.

“The coating is painted on an engine part because it has anticorrosive properties,” Biddy said.

He is excited that his work contributed to a product that will be used by and benefit many people.

“It’s a good feeling,” he said. “It’s definitely eye opening to see something that was so small can be used in such a large application.”

The internship also provided him a chance to make new friends with other interns and split his time between work in the lab and sightseeing.

“We became really good friends over there. We’d sit down during the week and plan out our weekend. Every weekend we would load up on a train and go to a different place.” Biddy said.

“It was the perfect balance. There wasn’t so much work that I didn’t feel like I wasn’t getting the European experience that I was expecting.” he said.

Biddy will have plenty of memories to share. In addition to seeing much of Aix-en-Provence in the south of France, Biddy was able to travel to nearby countries like Spain and Switzerland.

“We went to Switzerland and to Mount Blanc, which is the tallest peak in the Swiss Alps,” he said. “We also went to Monaco and got to see the Casino de Monte-Carlo. We went to Barcelona, Spain, and saw the Sagrada Familia Cathedral. That’s the oldest cathedral that’s still under construction. We made a trip to Paris, and I got to see the Eiffel Tower. That was amazing.”

This was Biddy’s first trip to Europe. He was happy he did not experience any cultural challenges when working with European colleagues.

“It was great getting to see how different it was,” he said. “I tried to pick up as much of the language as I could, but everyone was very helpful, and we could communicate very efficiently. I really couldn’t have done it without their help and support.”

Biddy hopes to eventually build a career in engineering, and his internship has opened his eyes to even more possibilities.

“I like the hands-on aspects of the engineering world,” Biddy said. “That was something I got to do extensively over in Europe.”

As he prepares for his sophomore year at SWOSU, he looks forward to putting what he learned into practice.

“I got to do a lot of lab work and use different equipment that I’ve never used before. I got to become more familiar and more comfortable working in a lab environment. I did have to do some minor mathematic work during this internship. That will also help out in the classroom.” Biddy said.

During the trip, he shared his experiences with his older brother.

“I’m following the same track he did through college. He also studied manufacturing engineering. It’s really great to talk to him about the stuff that I’m working on, and he always understands what I’m saying.” Biddy said.

“I would like to mention and thank all my professors that have helped me out and everyone that’s been a part of helping me through this process. I definitely didn’t do this by myself. There are a lot of people that helped me along the way.”

He is hopeful his internship will influence other Native American engineering students to pursue the opportunity.