CPN lends a hand to communities struck by tornados 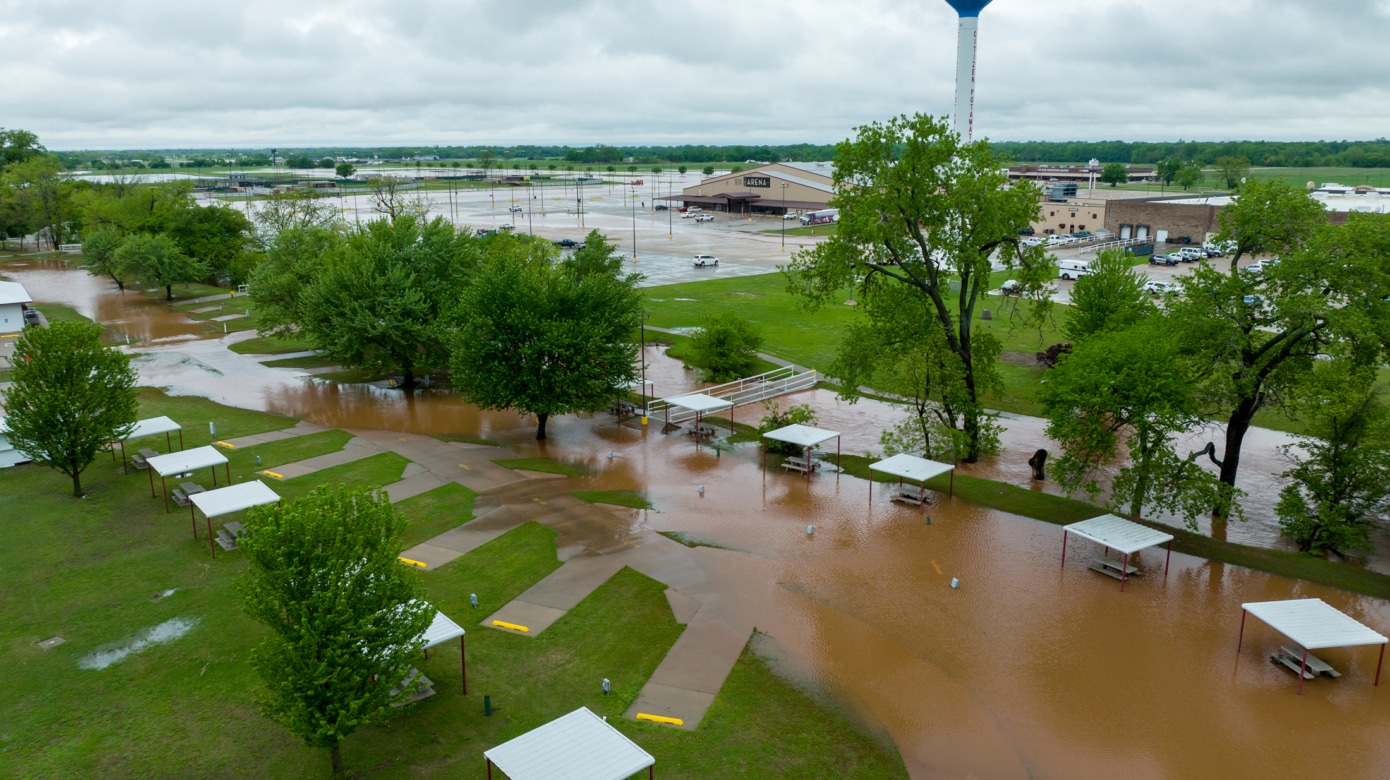 On Wednesday, May 4, 2022, severe thunderstorms moved through southeastern Oklahoma for the second time in just over two days, causing flooding and minor damages to Citizen Potawatomi Nation properties and severe damages to the nearby communities of Seminole, Earlsboro and Strother, Oklahoma.

“We watched the storms go through on radar on TV and immediately offered assistance to communities that were affected,” said Director of the Citizen Potawatomi Nation Emergency Management Department Tim Zientek.

As the night turned to early morning, CPN EM received requests for light towers and bottled water from the city of Seminole, which was struck directly by a multi-vortex tornado days after suffering significant damages in an earlier round of storms. Zientek and his crew purchased the water from FireLake Discount Foods and delivered it to affected communities and provided the requested light towers.

Thanks to donations from CPN Health Services, the Tribe delivered an estimated $10-12,000 worth of masks, gloves and other personal protective equipment to survivors and clean-up teams in Seminole, Earlsboro and Strother as response efforts got underway. CPN also provided four portable generators to Tribal members and employees who lost power and helped to spread the word through the Tribe’s emergency communication networks about tetanus vaccinations being administered by District 6 of the Oklahoma State Health Department.

CPN’s Grand Casino Hotel & Resort contributed hot meals to survivors and response teams through a partnership with the Salvation Army.

Executive Chef Austin Kitsmiller told the Hownikan that the team cooked for 400 people on Friday, May 6, and for 200 people the following Tuesday. The meals included Salisbury steak, sweet potatoes, green beans, dinner rolls and gravy.

“We have the means to pull off (such a big operation), so we switched gears and fired up production staff and knocked it out. It was a full team effort,” Kitsmiller said.
He values the involvement in the local community the Nation consistently displays. He also had a personal connection to this particular effort.

“I’m from Wewoka, born and raised,” he said. “And about 90 percent of the people who had a hand in (making the meals) were from around that area. So, if you don’t know someone directly, you definitely know someone who knows someone. It really hits home.”

FireLake Discount Foods contributed chicken strips, mashed potatoes, green beans, and macaroni and cheese, which the Salvation Army distributed to 400 people on Saturday, May 7 and Sunday, May 8. The store also donated an additional 100 hot dogs and buns, which Bar-S employees grilled in Seminole for survivors and response crews, FDF Director Richard Driskell told the Hownikan.

In addition to the direct aid CPN EM was able to supply, Zientek coordinated between municipal and nonprofit response teams in affected areas along with other CPN departments and services. He also served as a liaison with other tribal nations poised to provide supplies and aid.

Requests for bottled water from the city of Cromwell, for example, were filled by the Muskogee Nation, within whose jurisdiction Cromwell lies.

“It was quite a joint effort,” Zientek said.

He also connected points of contact for the American Red Cross with CPN’s Workforce Development and Social Services Department, which was receiving calls from Tribal members who experienced storm damage.

The Nation has a long-standing commitment to serving the surrounding communities, a testament to Zientek’s expertise and care, the spirit of community shared by Tribal departments, enterprises and employees, and the values of Tribal leadership.

At the end of the day, Grand Casino Hotel & Resort General Manager Joe Garcia wants communities in the surrounding area to know that the Nation helps everyone.

“We’re not just a casino. It’s just what people do. … And not just the casino, but the Tribe, are here to help,” he said. “And that starts with our leadership — (Vice-Chairman) Capps and Chairman Barrett. They love helping out the community.”

In 2005, Zientek wrote the Nation’s first pre-disaster mitigation plan, making CPN just the sixth tribe in the United States to have one outlined. He has since worked meticulously to secure the resources the Tribe would need in the event of a disaster — either directly affecting CPN or in the surrounding community.

He was also instrumental in founding the Inter-Tribal Emergency Management Coalition, a network connecting the tribes in Oklahoma to share resources, aid and knowledge in the case that disaster strikes any one of the tribes or their surrounding communities.

“We share resources. Not just material things, but we share information. We train together, we work together, we meet monthly to discuss what’s going on in different parts of the state,” Zientek said.

Beyond creating resource and response infrastructures — though he has led the way, both for CPN and for tribes across the country for many years — Zientek has dedicated his time and effort to developing relationships with local municipalities and organizations.

“It’s taken years to develop that because there used to be a very heavy stigma about tribal governments and working with tribal governments,” he said. “But it’s building those partnerships and relationships and working together to respond to a situation like a tornado, where it’s all the communities and all the tribes. Everybody comes together for the same goal. And that has been one of my happiest success stories is to have been able to bring all these people together.”

Learn more about the Inter-Tribal Emergency Management Coalition at itemc.org.