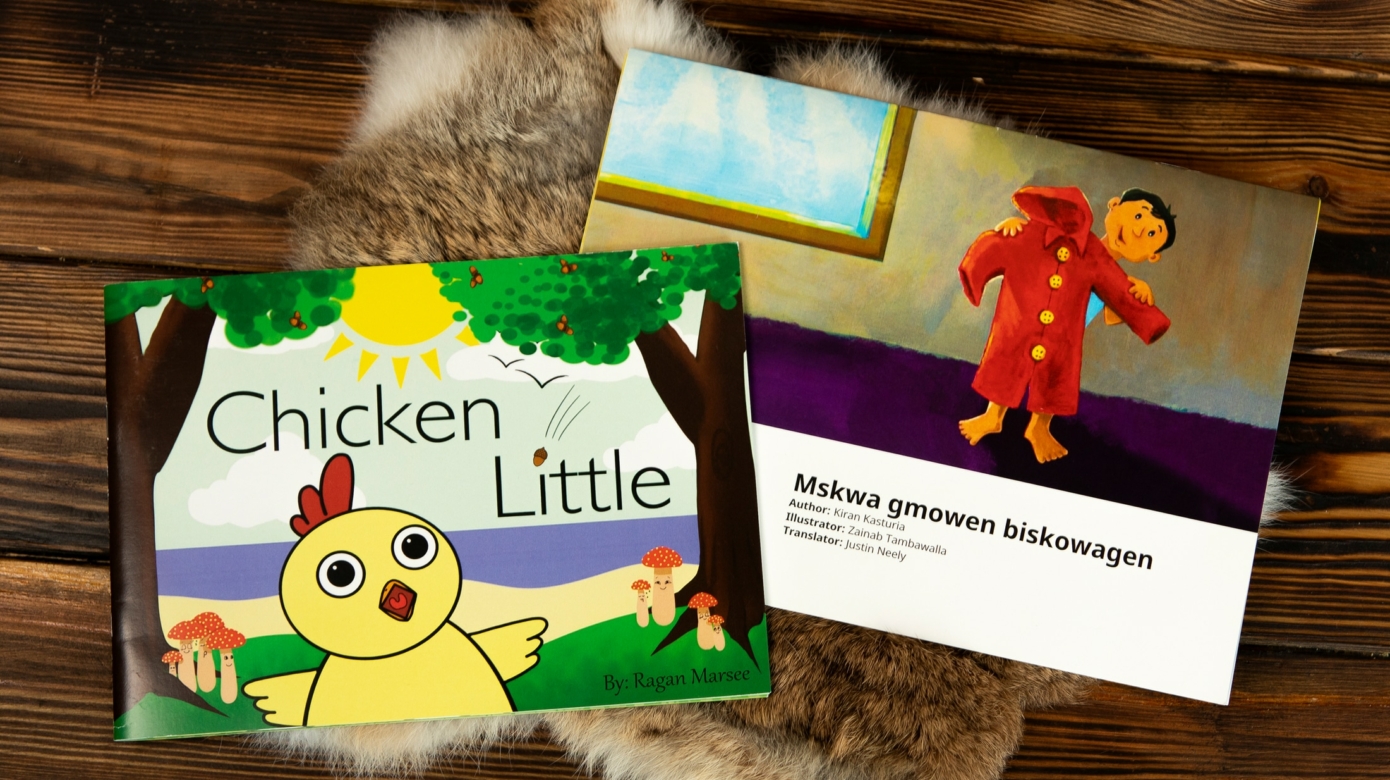 This year, Family Reunion Festival attendees will find something in their gift bags they never have before — a set of four children’s books from the Citizen Potawatomi Language Department. The staff worked on them after receiving a $200,000 grant from the United States Department of the Interior’s Office of Indian Energy and Economic Development as part of its Living Languages Grant Program in 2021.

“The way our legends and stories were passed on was through stories. So I think storytelling is just a natural part of being Potawatomi, if you will, and the fact that we now have some stories that kids can listen to and hear in the language, maybe about people that they might be able to relate to a little more, I think is important,” he said.

Language aid and Tribal member Ragan Marsee worked on a Potawatomi telling of the classic fable, Chicken Little, included in the bag. She brought the language into the story and hand-crafted the book’s artwork. She holds her responsibility to Tribal members close to her heart.

“I couldn’t tell you how excited I would have been to have something that had the language in it that I could keep on the shelf and have throughout my life,” Marsee said.

The Language Department has also produced a Potawatomi version of The Red Raincoat (Mskwa gmowen biskowagen) by Kiran Kasturia and translated by Neely; Wéni je o nam’ edit? (Who’s Dancing?) by Robert Collins; and a book based off the language department’s puppet show Mtek Wigwam (Tree House), translated by Justin Neely with illustrations by Michael Kelehar.

Each book teaches the readers vocabulary applied to cultural values, animals, weather and other subjects.

“It’s nice to have your own cultural aspects put into books, seeing things from more of a traditional perspective, more of a Potawatomi perspective,” Neely said. “We have characters like Bgoj Nene, the Bigfoot, in one of them. Another story talks about how we offer tobacco and things like that. So, I think being able to incorporate some of our views into the books is nice.”

Neely and the department worked to provide an interactive way to spread the vocabulary and stories through generations and plant seeds to make Bodéwadmimwen something more Tribal members use all the time.

He wanted to serve a wide age range and ability level with the books, and the grant provided the department’s first opportunity to create something like them for children. However, any adults beginning to learn Bodéwadmimwen can memorize the vocabulary along with their kids as they read together.

“The nice thing about a lot of these stories is we’ve kind of kept it clean by putting the Potawatomi only on the pages. But then, the back will have the pages with the actual English on them so that people can make sure they understand what’s going on with each page,” Neely said.

Each book includes a QR code on the back, allowing the reader to use their phone and access an audio file of a department staff member reading the entire book in Potawatomi. Marsee hopes it all comes together and lights a fire in the next generation to learn the language. She remembers receiving a bag full of gifts as one of the best parts of Festival. The coloring pages with Bodéwadmimwen on them inspired her to learn the language, and she hopes the books do the same for others.

“I just hope that this book brings a spark to the young people — or to any of the people who read it — to begin their knowledge journey in the language. Because this language brings so much healing, and it brings our people home,” she said.
Neely agreed.

“I think it’s just going to be a nice, enjoyable thing that I foresee hopefully making a lot more books as we go forward,” he said.

After the 2022 Family Reunion Festival, the CPN Language Department plans to make the books available to all Tribal members. Information on how to order the books will be published online and in the Hownikan. Find more language resources at cpn.news/language.