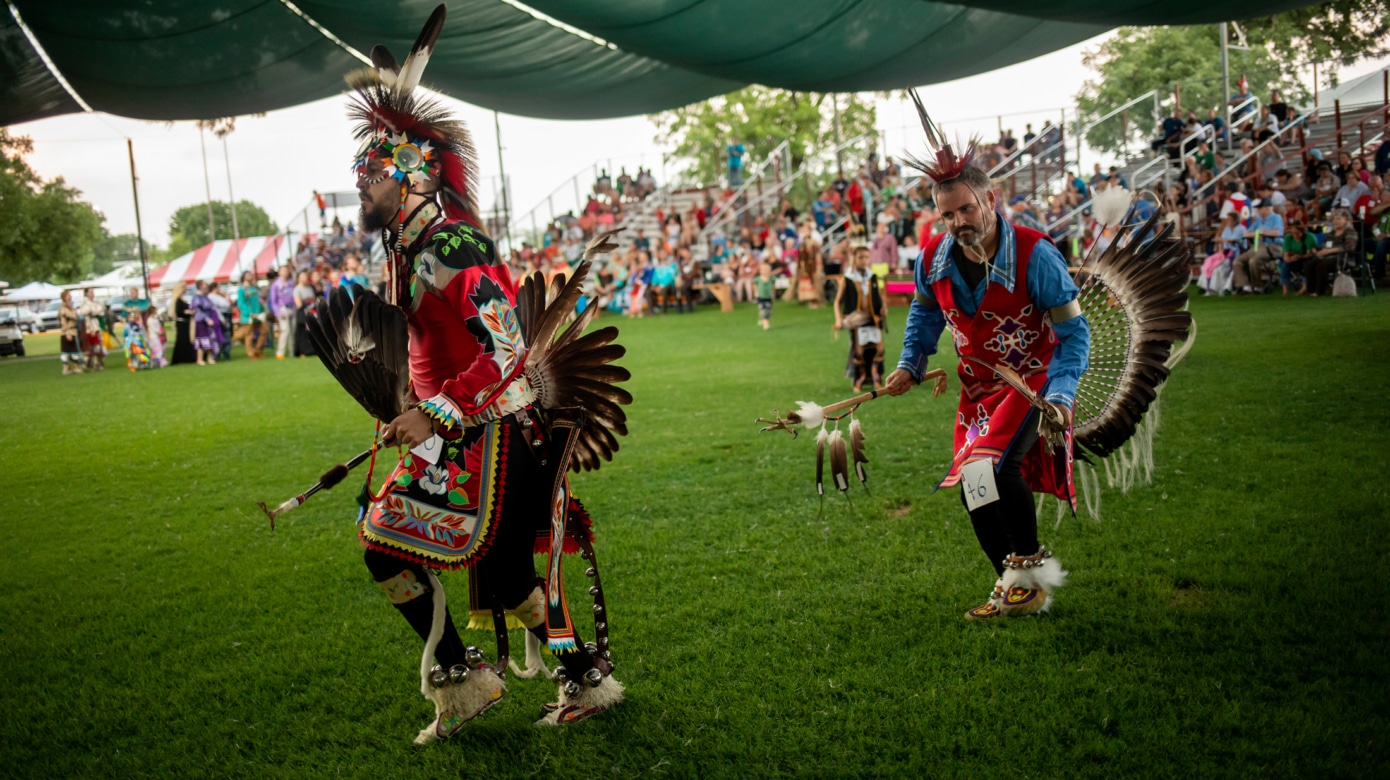 Lehman began serving in this capacity after many years of high-level competition both at CPN, frequently winning the men’s contest, and at powwows across Turtle Island. His job involves constant communication with the drummers, dancers and emcee alike to orchestrate the flow of the evening; he also oversees Grand Entry.

CPN’s powwow is different from most other powwows, Lehman explained, as participants are all Citizen Potawatomi. In the late 1990s, Tribal leadership decided to exchange the prominent Intertribal Powwow for a Festival focused specifically on preserving and teaching Potawatomi heritage to Potawatomi people.

Lehman believes dancing is a critical way culture, tradition and Tribal sovereignty are exercised and passed down for generations to come. He grew up dancing and is encouraged to see young people at Family Reunion Festival learning the ways of their Tribe and keeping traditions alive and thriving.

He takes seriously his role in helping to pass on knowledge of Potawatomi ways.

“We’ve got to have that,” Lehman said. “We’ve got to start teaching our young people the language, the culture, and the old ceremony traditions. We’ve got to keep them alive. For us to be considered a sovereign nation … we must carry on these teachings and traditions.”

Proper attire honors the sacred space of the dance arena, ancestors, tradition and fellow Tribal members. As such, it is mandatory for entering the arena.

Everyone should wear closed-toe shoes at all times. Flip flops, tank tops and shorts are not permitted in the arena. Those not following the dress code will be asked by Lehman and LeClaire to remain in the stands and not enter the arena to dance.

Just as dancing takes a devoted regimen of training built on respect, so does the entire process of preparing regalia, which requires great attention and care.

“Everything’s handmade. … Everything we make is very spiritual to us. It has a meaning,” Lehman said.

Northern Traditional, the style that Lehman dances in, is a northern plains war dance, and the regalia worn for it has particular significance in that context.

“In the old days, you could tell what tribe someone belongs to by the pattern of their regalia,” Lehman explained.

As tribal styles have influenced each other, it’s harder to identify someone’s tribal affiliation based on design alone in the present day. Nevertheless, the woodlands floral design remains a hallmark of Potawatomi regalia.

Colors also used to be more distinctly associated with particular tribes, but today, colors are one way that Tribal members reflect their individual personality in their regalia.

As Tribal members look forward to this year’s Festival and powwow, Lehman reminds them that the dancing, the songs and the structure of the event reflect hundreds of years of traditions and hundreds of years of survival. The requirement for proper attire within the arena is out of respect for this important heritage — and essential to carrying that heritage forward into the future.

The Nation’s Cultural Heritage Center will host classes on Friday and Saturday of Family Reunion Festival for making ribbon shirts, applique skirts, shawls, moccasins and more. Participants should register for the classes ahead of time at the CHC. Classes fill up quickly, and some require a charge to cover the cost of supplies.

Festival attendees may also purchase regalia from the Cultural Heritage Center gift shop, either in person during the Festival or online ahead of time at potawatomigifts.com. Tribal members also set up booths on Festival grounds to sell regalia and other items.

Staff recommend those attending Family Reunion Festival make arrangements early to ensure that they have all the proper attire for Saturday’s Grand Entry and powwow.