The story of the Nadeau family begins in 1611 in Genouillae Angoumois, Charente, France when Mascia dit Lavigne Nadeau was born. Mascia and his wife, Jeanne Despins, moved to Quebec, Canada. It is unclear when and why the family emigrated from France to Canada, but they may been among the French seeking more openness and economic opportunities. They had a son in 1637, named Joseph Ossany dit Lavigne Nadeau.

In 1665, Joseph married Margeurite Abraham in Quebec. They had a son, John Baptist (Jean) Nadeau, who was born in 1670 in Poitou, Canada. Over the next four generations, the family lived in and around Berthier, Canada.

It wasn’t until the fifth generation, when John Baptist Nadeau’s children Joseph, Anthony (Antoine) and Martin, were adults that the family’s presence was documented in Michigan. Antoine, born in Montreal, married Louisa Agatha Reaum on Jan. 7, 1789, in Detroit, Michigan. Martin Nadeau, born in Quebec, married Mary Reaum on Aug. 14, 1786, in Assumption Parish, Ontario.

As railroad companies and the federal government plotted westward expansion, the Potawatomi and other Indigenous nations were pushed off their ancestral lands. Eventually, the Treaty of 1837 forced the Potawatomi in Indiana to give up their lands in exchange for a reservation in Kansas.

They moved to the Osage River reserve in Kansas from 1837 to the early 1840s. The Treaty of 1847 then forced the Potawatomi to move from the Osage River Reserve to a new location north and east of the Kansas River. Members of the Nadeau family were among those in June of 1848 helping to establish a new site for the Catholic Potawatomi Mission of St. Marys.

When Kansas became a state in 1861, squatters and railroad companies targeted Potawatomi lands. The U.S. government began its final push to remove the Potawatomi from Kansas to Indian Territory. The Treaty of 1867 certified the purchase of allotments and surplus lands in exchange for approximately $150,000. The Potawatomi used the funds to acquire a reservation in Indian Territory, and the government sold the Kansas allotments to the railroad.

The allotments of 1872 and 1887 marked the beginnings of the modern-day Citizen Potawatomi Nation. Among the Nadeaus in Kansas who were listed on the 1887 Oklahoma allotments were David B. Nadeau and his children, John, Florence and Julia Ann; Peter A. Nadeau and his wife, Madeline, and their children, Eli, Alexis, Rose Ann and Isidore; Alexander P. Nadeau; his sister, Mary Nadeau Ford and her children, Emma, Lula, William, Ida Ford James, Alice Ford Slavin and Benjamin Ford; and Alice Nadeau Barshaw (Bergeron) and her children, Willis, Irvin, Gilbert, Otto, Nora and Robert.

Creating a home in Indian Territory

Over the next 20 years, families and individuals gradually made the move from Kansas to central Oklahoma. The journey itself was dangerous, and families who arrived found nothing but empty prairies.

Members of the Nadeau family who arrived in Oklahoma had to work hard to make a life for themselves, often clearing large acreages by hand and establishing infrastructure, homes and farms.

Gilbert Neddeau was born in Michigan on Nov. 22, 1861. Gilbert came to Wanette, Oklahoma, in 1888 from South Bend, Indiana, but didn’t file for an allotment. He married Amanda Toupin Martel on May 7, 1899. Amanda, a Potawatomi woman, was the widow of Jerome Lewis Martel.

Amanda was only three when she came with her parents from St. Marys, Kansas, settling in what was known as the Adel community, Indian Territory. With her first husband, Jerome Martel, Amanda had four children: William Grover, Ethel Netta, Arthur Ambros and Louis Theresa. She lived in Wanette and moved to Indian Agency south of Shawnee between 1876 and 1879.

In 1906, the family moved south of Shawnee to the present site of Indian Agency. In 1918, they resided at 624 N. Dorothy in Shawnee. Gilbert worked for the Santa Fe Railroad and the family attended St. Benedict’s Catholic Church.

Gilbert died at home on May 2, 1942, in Shawnee. He was buried May 4, 1942, in Tecumseh Cemetery. Amanda died Jan. 27, 1954, and was buried in Tecumseh Mission Cemetery with six of her grandsons as pallbearers: Robert Botkins, Douglas Holmes, Leo Fairchild, David Miler, Donald Neddeau and Donald Fairchild.

Together, they moved to Sarah’s Potawatomi allotment and cleared 80 acres by hand. They had six children: Vincent Henry, Lillian Catherine, William Troy, Ray Aloysius, Joseph Francis Frank and Nila Cecilia. The family attended St. Benedict’s Catholic Church. Joseph died May 28, 1950, in Tecumseh. Sarah died May 5, 1952, in Shawnee. They were both buried in Resthaven Cemetery in Shawnee.

The Nadeau family, from its beginnings in France, to its early years in Michigan, overcame unfathomable challenges in Kansas and Oklahoma. From these foundations, they have built a rich legacy for their descendants and generations yet to come. 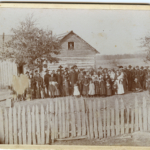