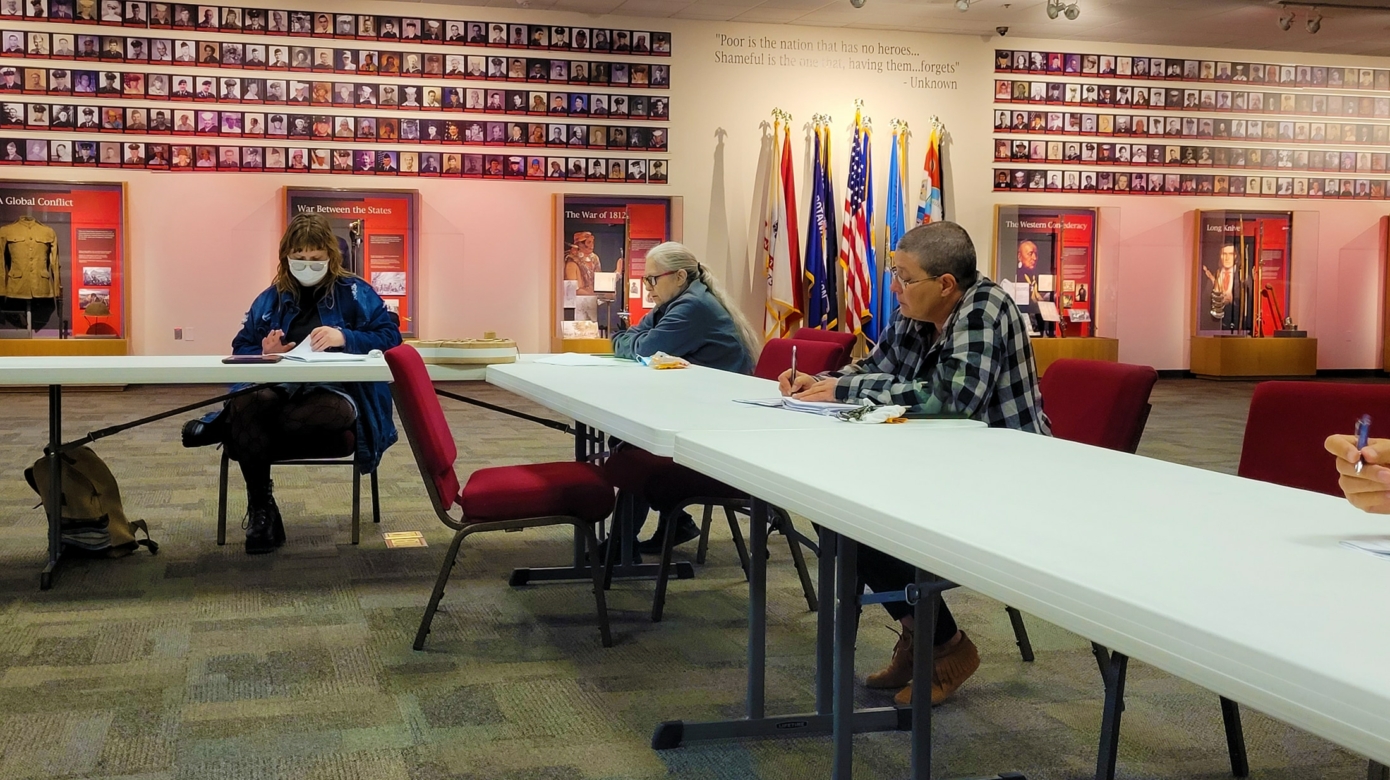 The Citizen Potawatomi Nation Language Department works to preserve and teach the Potawatomi language through in-person classes and a number of online resources.

In 2021, the Citizen Potawatomi Nation Language Department once again began offering in-person classes after more than a year of virtual learning due to the pandemic. Since many Tribal members live across the country, they continue to use online platforms during every session. Department Director Justin Neely teaches each class virtually over Zoom and uploads them to YouTube afterward.

Tribal member Lorrie Underwood has been tuning in from Colorado to as many classes online as possible the past two years. She appreciates the language department’s effort to offer it via the internet.

Another Tribal member, Marilyn Annanders, has been attending in-person classes on and off for nine years at CPN’s Cultural Heritage Center. She passes on her knowledge to family members, cherishing the importance of Bodéwadmimwen.

Annanders feels positive in her progress since returning to in-person classes this fall.

“I can understand what he’s saying a lot more than what I can speak, but today I was actually speaking some of it, and it was kind of impressive. Woah! That came out of my mouth correctly,” she said and laughed.

Neely tells students their success in the language depends upon self-patience and setting realistic goals and expectations.

“Don’t be too hard on yourself,” he said. “You’re not going to walk out of your first class, your third class, saying everything perfectly. Not going to happen. Wouldn’t happen with French, German, Potawatomi, anything. And that’s okay. The more you use it, the more comfortable you get with it. The better your accent becomes, and you get better with it.”

Neely feels children pick up the language very quickly, saying they may not be as outwardly motivated as adults but have less hesitancy.

“Kids don’t care. Kids will say stuff messed up, and they’ll repeat it. And they don’t really care if they sound goofy or whatever, and they’ll say it. A lot of times for adults, that’s a little bit of a hang-up for them. They’re kind of concerned with what their peers might think,” he said.

Both Annanders and Underwood teach their granddaughters Bodéwadmimwen as they learn, and they both have surprised their nokemes, or grandmother. Underwood’s granddaughter underwent her second open-heart surgery at just two years old. When asked how she was feeling after surgery, she responded in Potawatomi, “Gawa” or “Barely.”

“Like I’m feeling barely. Like not very well,” Underwood said. “So here’s my little granddaughter in the hospital. My husband walks in and asks her, ‘How are you doing?’ She looks him right in the eye — she’s two years old at this point — and she says gawa, papa.”

Annanders’ granddaughter has had a long journey with language and the ability to vocalize her thoughts and feelings. Now in kindergarten, she enjoys telling her teacher, “Bama pi!” or “Until later!” as she leaves the classroom.

“And the first time she did it, the teacher was kind of confused,” Annanders said. “But we explained what she was saying, and she was really proud of her for keeping up. Because she was non-verbal until after she was 4 years old. So she’s learning both at the same time. Slowly.”

Neely thinks hosting classes online and providing a myriad of internet resources not only reaches Tribal members across the country, but also meets the next generation of younger speakers where they are.

“You’re trying to reach your audience, and the reality is our children, our grandchildren are very tech savvy — even much more tech savvy than myself. We have to make the language available in a medium accessible to them,” he said.

Neely started a Potawatomi language Facebook group a few years ago. It grew in popularity and now has over 5,000 members from Potawatomi tribes across the country. He welcomes all of them to the online classes.

“You never know who’s going to jump in to the classes when we post them and have them available,” Neely said. “Sometimes we’ll get folks that are Citizen Potawatomi, Prairie Band, Gun Lake. And it kind of creates that larger Potawatomi language community that exists out there.”

Underwood noticed a craving to learn about culture and language while talking to other Citizen Potawatomi when she began taking classes. She sees them as a pathway to something more.

“There is a lot of language, and honestly, it will open doors to other stuff,” she said. “You will meet other people, and you will start to slowly make those connections and get that culture fix that you think you’re missing.”

Neely agrees that language is the foundation. During his lessons, he often teaches short stories, history lessons and cultural traditions along with vocabulary and grammar.

“Like I always like to say, it’s our stories, it’s our history, it’s our recipes, our ceremonies, our dances — all that stuff, that common blood that makes us Potawatomi. But really it’s our language that’s that thread that kind of ties it all together,” he said.

After taking classes for two years, Underwood sees it as her responsibility to learn and teach the next generations of her family.

“Nobody can take the language away from you. If you can speak your language, that’s not something you wear. … You live the language,” she said