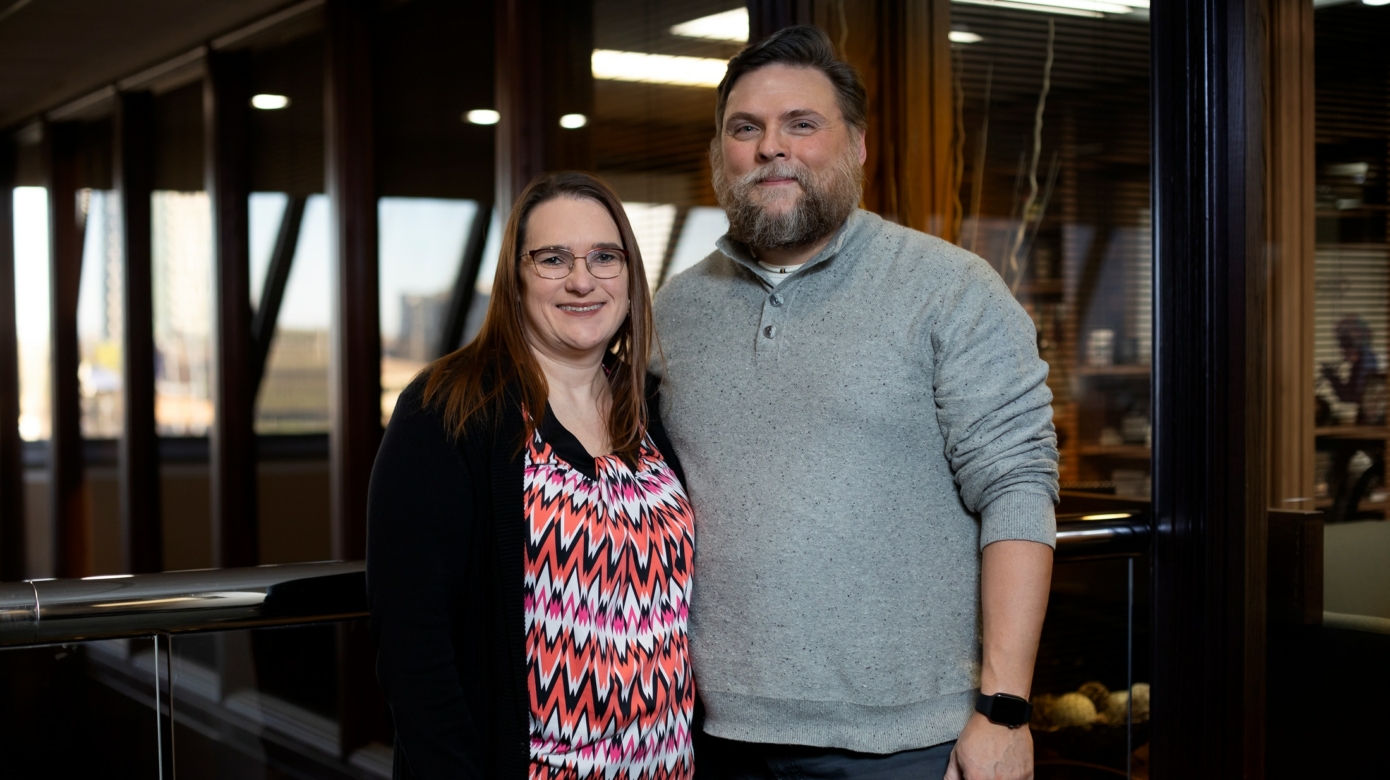 Tribal member Randy Hass and his wife Melissa use a myriad of skills while helping businesses improve their leadership, information technology platforms and finances.

After watching several businesses start and fail during his two decades in information technology, Citizen Potawatomi Nation tribal member Randy Haas realized their success depended much more on communication and leadership than skills and strategy. He began an Oklahoma City-based information technology company in 2018, Sharpstone Group, LLC. Haas then added Stonecutters Leadership as a communication branch that focuses on leadership training and team management.

“That’s where I personally have a lot of passion right now is with the Stonecutters Leadership,” Haas said.

The Bourassa family descendant and his wife, Melissa, also have accounting experience and offer those services to clients.

“Our goal will be to bring in other people as we grow whose passion is some of the smaller core pieces that are very specialized where we can be … there for all parts of an organization in transition,” Haas said.

“Ultimately, we want to be a resource for Native American business owners.”

Haas calls himself a “values-based capitalist,” teaching the tenet that leadership corresponds with influence. He believes that an organization’s biggest asset is its employees, and showing them compassion, understanding and trust creates long-term success. Stonecutters Leadership uses the John Maxwell principles of leadership with clients. Maxwell wrote nearly two dozen books focusing on the subject throughout the past two decades.

“When you come to (leadership) from a position of influence, it’s all about building relationships, and it’s all about adding value to people and caring about people,” Haas said. “And one of the things that (Maxwell) says that we echo is that people don’t care how much you know until they know how much you care about them.”

Haas’ experience as an employee with several companies showed him the necessity of leadership training before becoming a boss or manager.

Value and profit generation remain the core of owning a business; however, Haas believes leadership makes or breaks both from the beginning. What he calls “values-based capitalism” focuses on the long term by taking care of the organization’s community as a whole.

He pointed out during a recent Hownikan interview that a company’s sustainability depends on resource availability and ability to produce value long term.

“The point of highest optimization in a team is well before your resources are exhausted. … We’re just burning people out, tossing them out and moving forward. And that’s not long term. That’s not a value-generating proposition,” Haas said.

Haas’ grandfather, George Haas, lived in Shawnee, Oklahoma, as well as the rest of their family. His grandfather and father were both proud of their Indigenous heritage, and they told Haas about their family history throughout his life. He also shares his cousin Billy’s interest in Potawatomi history and genealogy. Now in his 40s, Haas also began learning Bodéwadmimwen several years ago. He views it as a bedrock of Potawatomi culture and lifeways.

“The different thought process behind (going from) English speaking to Potawatomi is incredible. And it’s something that I think everybody needs to go through that process to learn it,” he said.

Modern accessibility to online classes and digital resources from the CPN Language Department offers Haas the opportunity to connect with the Language Department Director Justin Neely and language aid Robert Collins as well as other students. Bodéwadmimwen shows its speakers root themselves in a communal way of living with their focus on the group’s betterment.

The company also became a member of the American Indian Chamber of Commerce of Oklahoma, and Haas joined the 2019 Leadership Native Oklahoma class to make connections and learn about the issues and trends in Native business in the state. It provided a way for his business and other interests to come together and serve a bigger purpose.

“I felt like that was a great first step in that process and becoming a part of something that I had not been as deep a part of as I wish I could have been,” Haas said. “And then especially learning the language and things like that has been one of those things where it’s like, ‘OK, I feel more connected now than what I ever have in the past.’”

With the pandemic separating companies and pausing in-person conferences and training, Haas and his wife spent the last two years taking on various projects underneath their vast skill sets. They ran IT for virtual seminars, taught online leadership classes, helped clients with accounting, and more. Haas even took up crafting and created Grindstone Forge. He began making pens and using his 3D printer and laser etcher to make custom orders of almost anything.

He also hopes to complete his doctorate of business administration accounting program.

Learn more about the American Indian Chamber of Commerce of Oklahoma at aiccok.org.