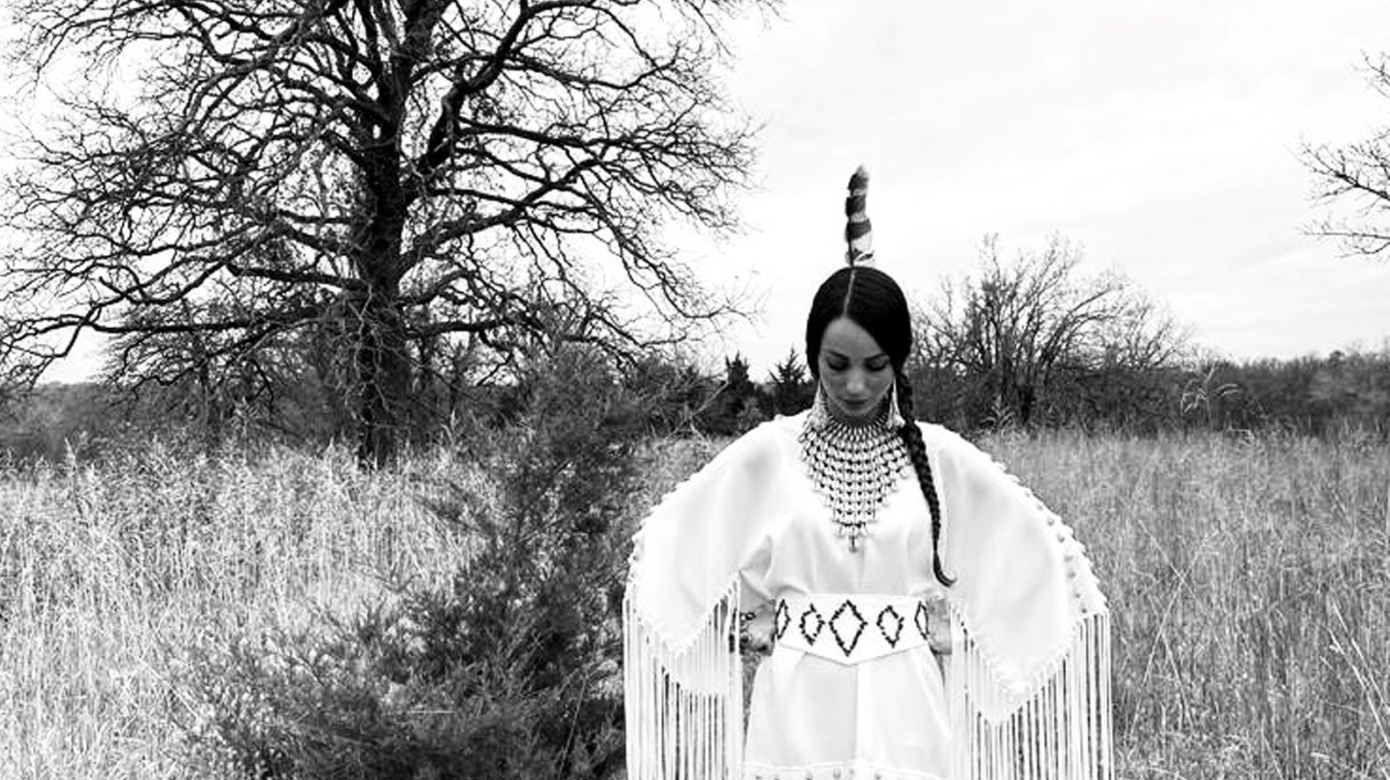 Kristen Arambula Hernandez recently received her Potawatomi name, Idwegishgokwe, which means Both Sides of the Sky Woman. Hernandez is an advocate for preserving and reclaiming ancestral knowledge. (Photo provided)

As expectant mothers anticipate holding their new baby, they may assume the entire labor, delivery and recovery process must take place in a medical facility. However, childbirth experiences vary, and can be tailored to incorporate culture and traditions. Kristen Arambula Hernandez, a birth doula and Indigenous breastfeeding counselor in Norman, Oklahoma, seeks to do just that.

Hernandez was in Argentina while expecting her first child, and she came back to Oklahoma before she gave birth. Hernandez listened to advice from other women about hospital delivery. However, she had a different vision and felt strongly about taking guidance from her intuition and Potawatomi heritage.

“Hospital birth never appealed to me; it never even was an option for me,” Hernandez said. “I instantly knew I wanted a home birth. So when we came back to the U.S., I started researching home birth and found the Community Midwifery Services in Norman.”

The Pratt/Quilmette family descendent and mother of three believes her ancestors played a role in helping her during her childbirth journey.

Through both her own experience and the friendship she developed with her midwives, Hernandez felt called to learn as much as possible about everything related to pregnancy, childbirth and breastfeeding.

“My experience with Maximus breastfeeding was textbook 100 percent everything that can go wrong, went wrong,” she said.

Hernandez recalled that it took four months to overcome their problems and gain confidence.

“Having experienced that really inspired me to learn as much as I could about breastfeeding so that I could help other moms because I knew if I could, sticking it out like that for four months, the way that I did through tears and blood and pain … I knew I could encourage other mothers to do the same. I would have never have gotten that far if I didn’t have the support that I have, so I knew I wanted to be that support for other women,” she said.

“I think culture is just such a huge part of our identity and the practices that surround maternal care and childbirth, infant feeding and the mother’s experience,” she said. “This is a sacred time surrounding pregnancy. … It’s such a crucial time to nurture our traditional ways so that we can help mothers and babies start life in a good way.”

Her experiences and training have made her a passionate advocate for increasing breastfeeding rates among Indigenous women, which she noted is statistically low. Hernandez now spends a significant amount of time encouraging Native mothers to breastfeed.

“I just feel so strongly about preserving and reclaiming ancestral knowledge,” she said. “Breastfeeding is medicine. I think so much of that is lost in our culture today, the way that women are treated in pregnancy and childbirth and with feeding.”

Hernandez has trained with other Indigenous breastfeeding consultants who encourage women to focus on sharing their experiences, cultural stories and practices. Two Native American women created and taught one course she took in Arizona — Indigenous Breastfeeding Counselor Training.

While the two instructors were internationally board-certified lactation consultants, the instructors said certification was not necessary for others to share their knowledge. Women in a community offer support and pass down traditional knowledge, Hernandez added.

She said that across Indigenous communities, there has been a renewed focus on the community to support mothers.

“Everyone was involved, not just mom,” she said. “Reviving that aspect of our culture is beautiful and healing. I used to pride myself on being the ultra-independent woman. And I realized very quickly, I need people. I need community. I need help. I need to surround myself with support and love. And we were never meant to go through this life alone.”

Hernandez’s favorite aspect of what she does focuses on actively listening to and affirming mothers.

“They need someone who really cares to listen to them and validate their experience,” she said. “When women feel safe, we can create trusting relationships with moms.”

The influence of the Seventh Generation has continually inspired her to take a more active and energetic role in her family’s traditions. Hernandez commits herself to further strengthening her connection to her Potawatomi heritage and its influence on what she does.

She recently received her Potawatomi name.

“I was named on the new moon, on December 4th, the day before my 34th birthday. My husband and I worked together to clear a circle on our land for the sacred fire and ceremony. De’Wegen Kwek, the Potawatomi women’s drum group, was present, along with Jerod Impichchaachaaha’ Tate and his son Heloha. Jarod is a world famous Chickasaw classical composer and pianist. The drum girls and Jerod and Heloha sang at the naming ceremony. My family and friends were also there. It was such a beautiful and powerful day, especially to occur the day before my birthday.”

Her Potawatomi name is Idwegishgokwe, Both Sides of the Sky Woman. Hernandez has been a member of De’Wegen Kwek for almost seven years. Her son, Maximus, is involved with the men’s drum group.

“I’m still open to it all,” she said. “I feel a strong calling to create this space.”

Hernandez is available to consult at kristen.arambula@yahoo.com.