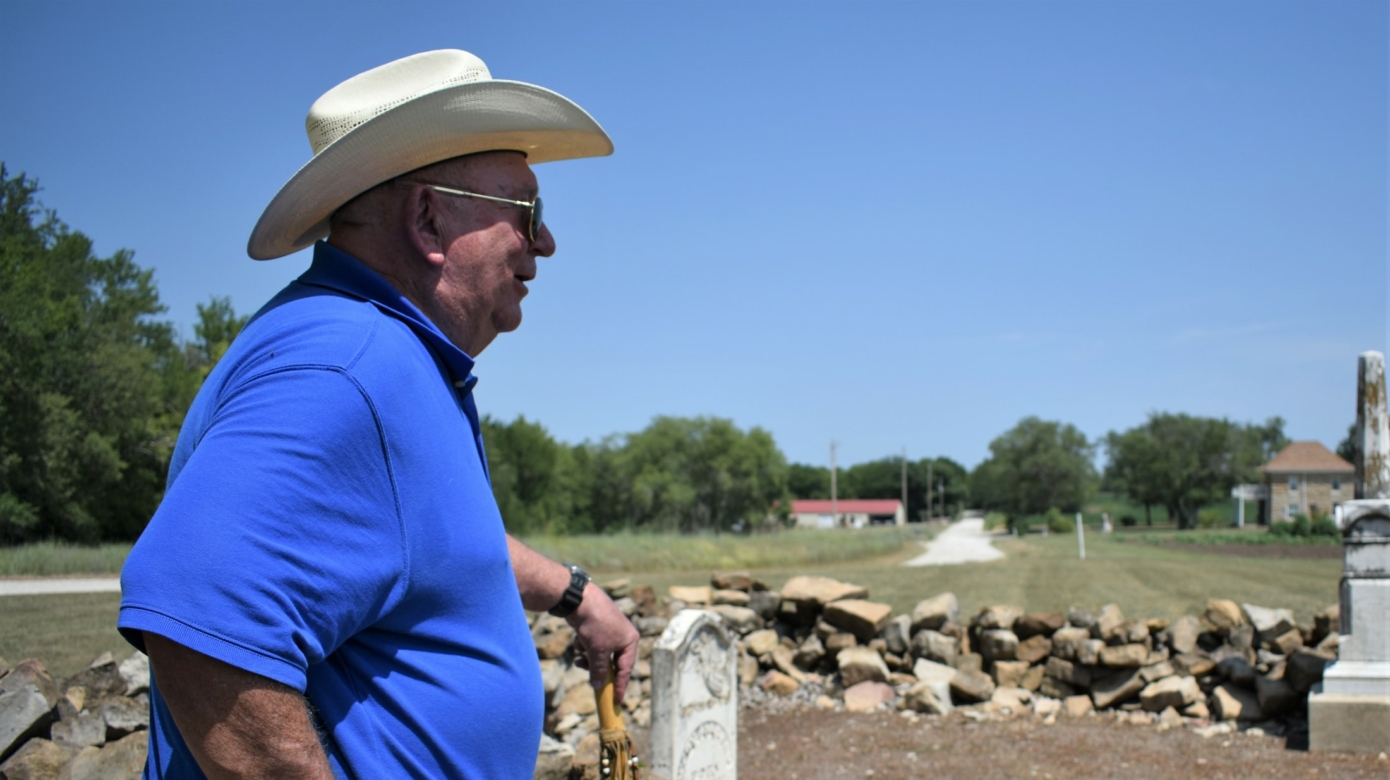 The once-bustling Potawatomi reservation settlement of Uniontown in present-day Kansas is today a small cemetery. The Citizen Potawatomi Nation and Prairie Band Potawatomi Nation have rich histories tied to the area that was the center of the tribes’ universe in the mid-19th century. Stories passed down for generations about the community located along the Oregon Trail inspired recent geological research from experts in the state.

“This isn’t about me. This is about your history, and I just want to be able to help contribute.”

During the 1800s, Westward migration along the California and Oregon trails brought 300,000 travelers through present-day Kansas. Uniontown served as a stop for emigrants before crossing the Kansas River. Many Potawatomi utilized the influx to establish a variety of successful businesses, including trading posts, ferries, saloons and more.

At its height, Uniontown boasted 60 structures, and thousands of Potawatomi Tribal members traveled to the town to collect their annuity payments. However, disease proved problematic for the community. A cholera outbreak in 1849 caused the Potawatomi to burn Uniontown to mitigate its spread. The community bounced back, becoming the largest settlement in present-day Kansas by 1852. However, a second outbreak at the end of the year caused more death and devastation.

Today, a large cottonwood tree stands strong on the cemetery’s southwest corner. Oral traditions indicate that 22 to 35 Potawatomi who perished during this time are buried around the tree.

“It has been said that they were all buried in a circle with their heads pointed to the tree,” Boursaw said during a 2018 Hownikan interview. “Many more, possibly hundreds, are thought to be buried in the fields that surround the tiny cemetery.”

Part of Dr. Schneider’s goals include finding scientific evidence that may help support the historical accounts.

They decided to utilize ground-penetrating radar and magnetic readings to uncover clues regarding the community’s past.

“I love (ground penetrating radar) because it provides the best resolution — really high detail as opposed to other methods. … And then a magnetometer because … we might be somewhere where Uniontown was burned down, so if there were any burned features, that would show up really well, or if anyone was buried with something metallic, that can also give us a pretty good signature,” she explained.

“I’ve spent a lot of time over the past year, just looking through these files and being like, ‘Where could this mass burial be?’” she said.

Dr. Schneider separated the cemetery’s property into five sections. One of the largest included the area surrounding the cottonwood tree.

While the data did not provide concrete evidence that may support a mass grave existing right next to or under the tree, she does not completely rule out the possibility.

“I kind of have a zone of uncertainty around the tree because the roots are pretty extensive,” Dr. Schneider said.

Because the current cottonwood replaced the cemetery’s original tree, it is possible the location moved during planting. She indicated this could explain the interesting readings GPR picked up in grid one.

“What stands out to me is this high-amplitude anomaly,” she explained while pointing to grid one. “It’s about 2 to 3 meters across, running in a north-south direction, and it’s probably about 3 1/2 feet deep, which actually matches the dimensions of what I would expect for a mass burial.”

“This is a commonly used method for archeology and also can be used to find graves,” she said. “It’s really useful because some materials will be more conductive versus more resistive, so it helps us pick up some features. If we have bone underground, dry bone is highly resistive.”

The data of the tomography scan revealed highly resistive material in grid one, indicating the possible presence of bones.

“This is really exciting to see because I have two pieces of geophysics that are supporting this,” Dr. Schneider said.

“It’s very localized to that spot, so it was really exciting because that’s just some supporting evidence that there’s definitely something there.”

While the possible grave is not as deep as normal, the soil’s makeup and man-powered digging may have contributed.

“It was a cholera outbreak. They were burying people very quickly, and it was really hard to dig through (clay),” she explained “So actually, the majority of burials that I’m picking up in Kansas right now have been incredibly shallow because it’s clay everywhere.”

Dr. Schneider plans to continue research on Uniontown Cemetery, focusing on collecting more data under the cottonwood tree itself, in grid one’s area of interest, and inside the stone wall enclosure that is the final resting place for many Bourassa family members.

“If we can, I will go out there with the radar and ERT and collect data over the area to find out where these burials are within the enclosure because a lot of the headstones have fallen over,” Dr. Schneider said.

Although student involvement has been minimal, she hopes more will show interest, especially Potawatomi and other Native American students.

“If you have students who are interested in doing work like this, my FAST geophysics program is open to any student who wants to work with me, even if you’re not here in Lawrence,” she said.

Find Dr. Blair Schneider’s published research on the Uniontown Cemetery at cpn.news/uniontownKU, and find her contact information at cpn.news/KUG.