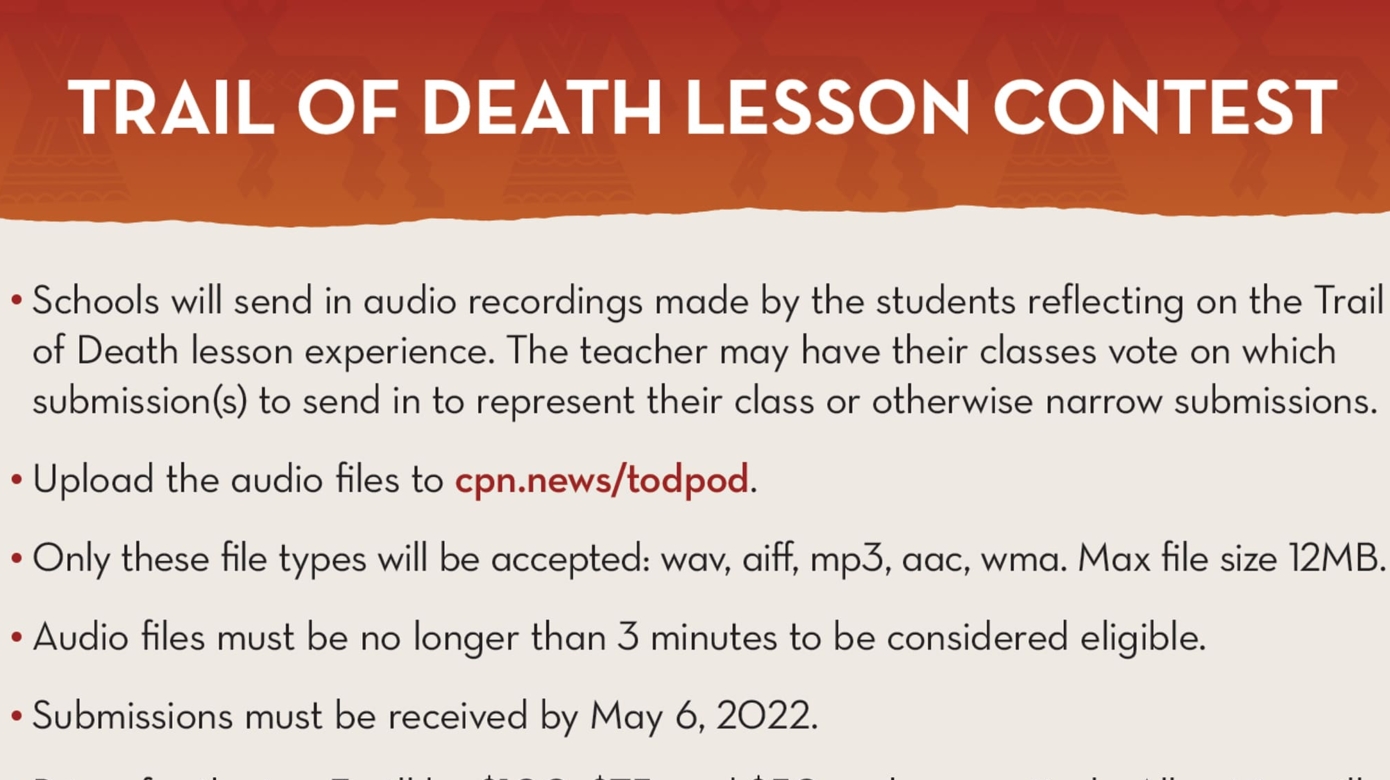 In an attempt to meet requests from teachers and school districts throughout the country, the Citizen Potawatomi Nation Department of Education began composing lesson plans about Potawatomi history in 2021. The first one available now tells the story of the Potawatomi Trail of Death.

“I’m really proud that we have something to offer educators or citizens now when they ask, ‘How can I incorporate Citizen Potawatomi Nation into our classroom?’ We’ve been asked that for years,” said CPN Department of Education Director Tesia Zientek.

“We also had some input from Norman Public Schools. Lucyann Harjo, Indian Education Director over at Norman (Public Schools), brought some folks over, and so we were able to kind of beta test it with them. And they gave us some really good feedback that helped us with the final lesson plan,” Higdon said.

The forced removal of Potawatomi from Indiana to Kansas took place over two months in the fall of 1838. More than 40 of the 859 Potawatomi passed away during the 660-mile journey, mainly due to the harsh conditions or disease. Most Native history education in the United States refers to the Cherokee Trail of Tears and rarely mentions other Native American communities’ similar experiences.

“Just by this little sprinkling of, ‘Hey, here’s a tribal nation that has a removal story that you’ve probably never heard of, and everybody has one.’ … I think that’s the main thrust. Let’s start looking at history from different points of view than just the traditional points of view,” Higdon said.

In addition to the dates, times and places, the lesson includes interactive pieces, such as an 11-minute walk designed to represent the 660 miles. Along the way, the students stop for short periods equating to each day along the trail and hear historical accounts from diary entries and written communication.

Since Potawatomi traditionally use oral storytelling, most of the primary sources for the lesson plan come from non-Native peoples — a lesson in itself.

“There’s also an explanation for teachers and students as to why these are the only primary sources we have from this era,” Watson said. “And I think that, combined with the oral storytelling activity, really hammers home the way different sources are valued or have been valued by historians and also opens the door for those sorts of alternative primary sources that students may not have thought about before the lesson.”

The department wrote the lesson plan optimally for a seventh or eighth-grade classroom; however, they made adjusting it easy for teachers for elementary or high school-aged students. Oklahoma educational standards introduce removal in third grade.

“The details can become more nuanced, or even some of the more gruesome details can be explored in more depth the older a student is. But at a young age, people can understand that history is a story, and it matters who’s telling it,” Zientek said.

As a final component, the lesson asks students to make an audio recording of their experience on their walk and hearing the historical narratives, putting themselves in the shoes of the Potawatomi forcibly removed from their homelands.

“That is why we have these written first-hand accounts and not the accounts from our ancestors the way we would have hoped. But we’re asking students to understand that, experience it, and then become a part of our oral record,” Zientek said.

The education department staff also created a contest to encourage classrooms to utilize the resources and promote student engagement. They are asking participants to send in audio recordings of their reflection on the experience for the chance to win cash prizes, a pizza party and be featured on the Tribe’s podcast, Hownikan Podcast. However, the goal stretches further than the rewards.

“That’s one of my greatest hopes is that it will start pulling that thread, and we can pull that thread with really young students,” Higdon said. “I think the younger, the better. Early students, if they can start seeing that world that way, it can really open up their minds and open up the potential for education, particularly history education.”

While the focus remains on the past, the staff also hopes to bring CPN members and Indigenous people into the present day for students through that interaction and inspire them to explore additional resources to educate themselves about the Nation and other tribes.

“I think what’s been most exciting for me is that this is just one lesson plan, but it’s also only the beginning,” Watson said.

The staff continues to work on the next lesson about the Oklahoma land runs and their effect on Citizen Potawatomi displacement.

Access the lesson plan online at potawatomiheritage.com/classroom. Enter the classroom contest at cpn.news/todpod through May 6, 2022.

Find out more about the CPN Department of Education at cpn.news/education, and email feedback or topic ideas at college@potawatomi.org. Listen to Hownikan Podcast on any podcast platform; just search “Potawatomi.” 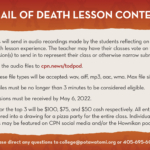