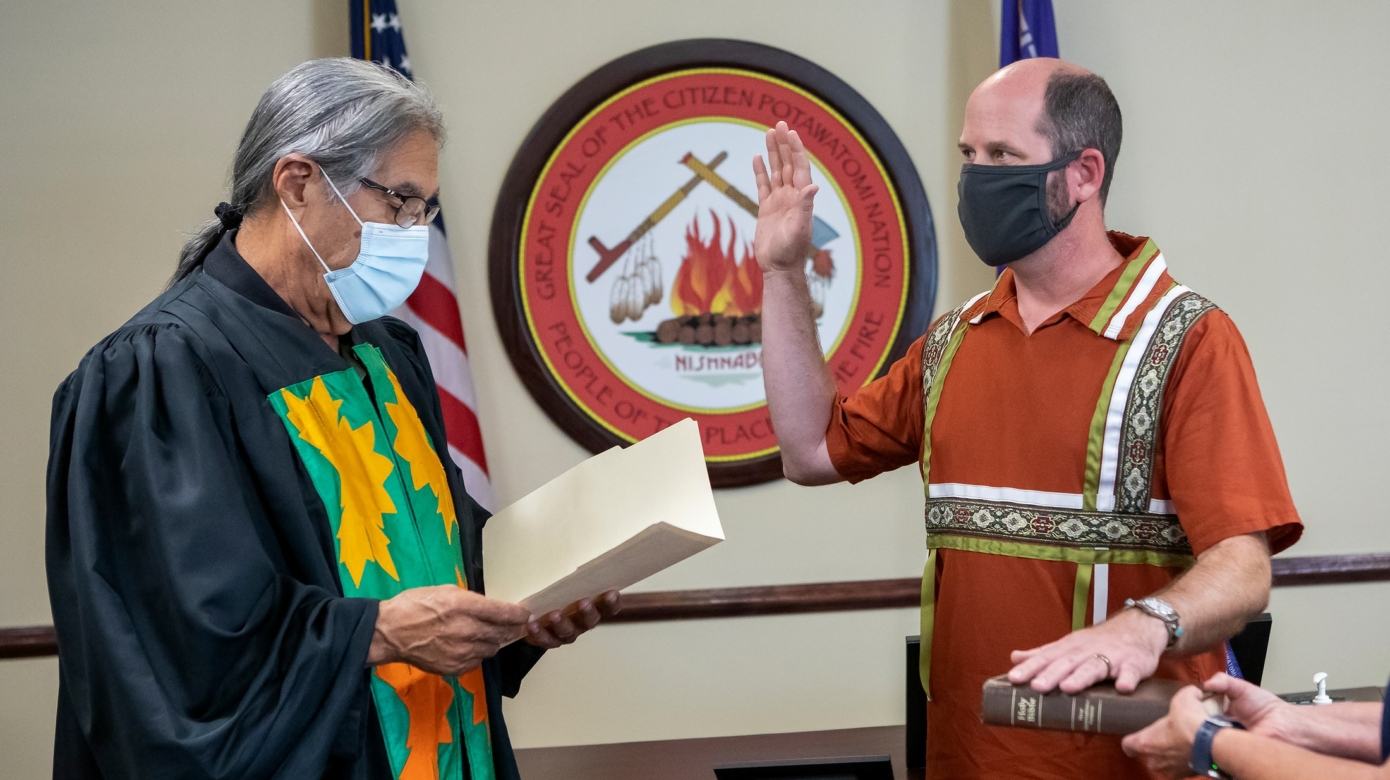 Following a long campaign and run-off election, Alan Melot became Citizen Potawatomi Nation’s District 1 legislator in September 2021. He lives in Joplin, Missouri, with his wife Stephanie and works as a licensed clinical psychologist. Melot decided to run for election in 2020.

“I had thought of this a time or two before, and it just seemed like a natural open door. … I visited with several people, and they encouraged me to run. They thought that I would be well suited for the position,” he said.

As his four-year term begins, Melot plans to translate his gratitude for the opportunity into service for his constituents.

Now in his mid-40s, Melot grew up in Shreveport, Louisiana, but spent a significant amount of time in the Oklahoma City metro as a child.

“I’m old enough to remember whenever the facilities (at CPN) weren’t here and when coming down to Shawnee to get your teeth cleaned or do other things at the Indian Clinic were very different from what they are now.”

Melot attended Caddo Magnet High School in Shreveport and briefly attended Louisiana State University before working and moving to Missouri to live with his wife Stephanie in the early 2000s.

“She’s the absolute structure and rock of my life. She’s my best friend and my support and just a fabulous person to be able to live with,” he said.

Their 21-year-old son Judah taught Melot a lot about himself through the struggles of parenting. As Judah grew up, Melot and his wife decided to return to school and finish their degrees. He graduated from Missouri Southern State University with a bachelor’s degree in sociology in 2018 and a master’s in clinical psychology from Pittsburg State University in 2020.

“A lot of people don’t have the opportunity to have the kind of support that I’ve had, and to be able to go back and finish up my bachelor’s degree was … a real privilege,” Melot said.

Aside from a fascination with human nature, Melot works as a psychologist to make his clients’ lives better.

“I love what I do. I just absolutely love helping people. I love being able to meet people in their hard times, in their hard places. And it’s just a really nice way to be able to give back now,” he said.

After completing his degree, Melot decided to pursue running for a legislative position to help others receive the same assistance from the Nation.

While a legislator, his goals revolve around communication, bringing the people of District 1 together, and acting as an informational resource. However, his priority remains fulfilling constituents’ requests.

“There are so many things that we have opportunities to do that perhaps we haven’t, ideas that we haven’t considered yet or projects that we may be working on and might need to have a little bit different input or different voices,” Melot said.

He follows longtime District 1 Legislator Roy Slavin, who walked on in April 2020. Melot admits to lacking Slavin’s life experiences and connections to generations older than him, both of which come with age. However, Melot believes he offers a lot to the role.

“I can bring my own personality and my own skills and my own experiences to the generations that are coming up, and I think that that’s very important,” he said. “Not that I can do what Roy did because I can’t fill those shoes, but I might be able to find some shoes of my own and walk a path that was like his.”

“Is laughing a hobby?” he asked and chuckled.

“I like to have joy that’s just rooted in something besides just what’s going on at the time because hard times come. And part of that joy for me is just hanging out with my wife and my family.”

His dad taught him to enjoy the outdoors, and Melot also likes quiet coffee on Saturday mornings, riding his motorcycle, traveling, all types of food and comedy.

Melot also considers bringing people together through accomplishments and overcoming arguments high on his skills list.

“What I’ve realized is that everybody has needs, and we all have places that we struggle and that we all have places that we can grow and learn. And that includes me. I’m talking about myself here, and that through this process, I want to learn, and I want to grow through this so that I can be the absolute best for my people that I can be,” he said.