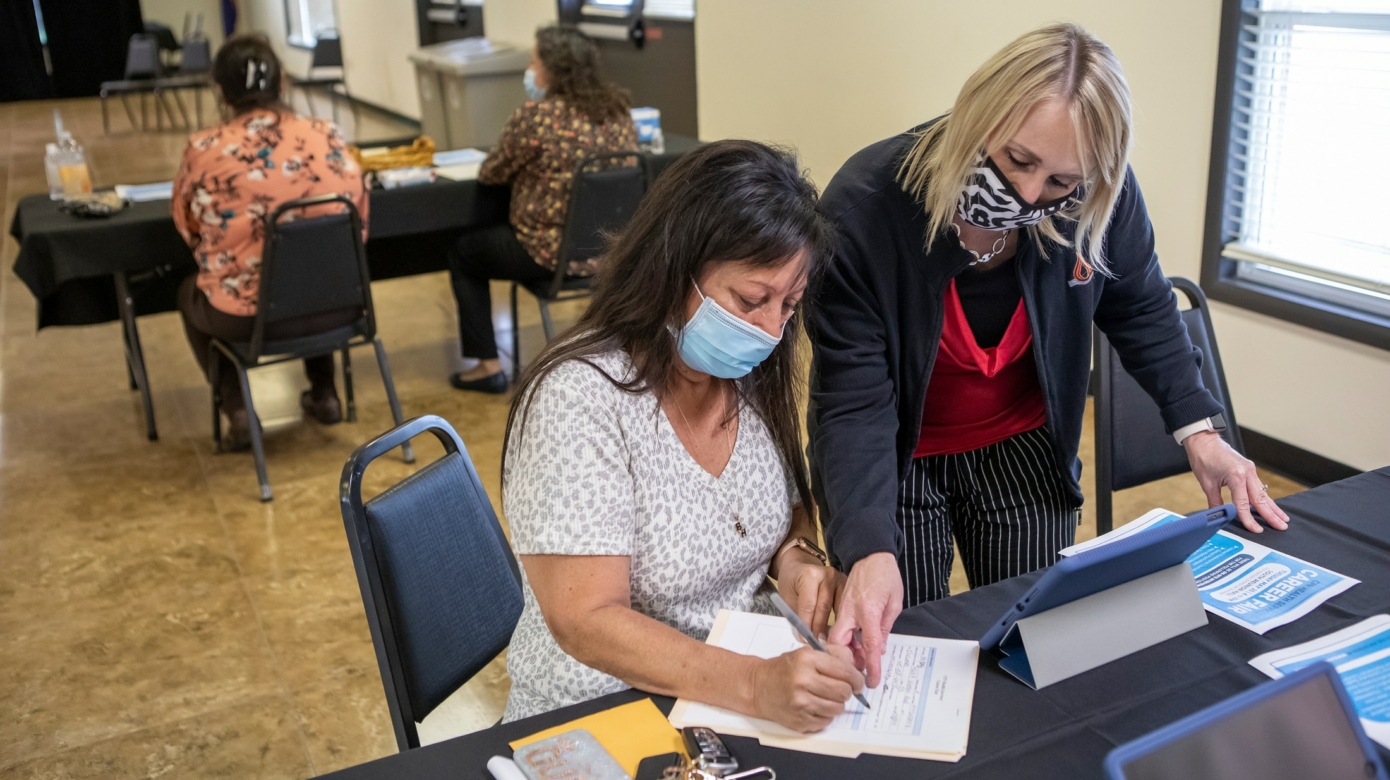 As entertainment, restaurants and health care clinics reopened to full capacity across the United States, the traditional employment process flipped, giving applicants their choice of jobs in many sectors.

“I remember at the first one, the Grand Casino, I was stressed. I was pretty stressed, worried. I was like, ‘What if we do all this, set up, and nobody shows up?’ And so I remember when that first person walked through the door, just everything lifted. I’m like, ‘It’s going to be a good day,’” Rice said.

Alan Gunter, security manager for FireLake Entertainment Center, attempted to overcome a lack of staff for several months. Positions usually attract at least 10 applicants, but recently, he has not received any. Gunter decided to put faith in the hiring event and arrived prepared to hold on-site interviews.

“I was overwhelmed. I mean, I really was because even HR and my boss was over there talking, and it was like, ‘Well, you haven’t sat down all day.’ And I’m like, ‘I’m loving it, though,’” Gunter said and laughed.

He filled almost all of his positions after talking to 13 applicants, a new personal record for the most interviews in a single day.

“That says something for the Tribe itself because being the largest employer in (Pottawatomie) County that makes a difference with a lot of people. They know we’re a stable company. We have great benefits to offer those people,” Gunter said.

Human resources staff helped the hiring event attendees pick positions that most interested them and put them in order of preference. Many then applied on the spot, followed by a quick prescreen.

“Then … we took them to the table of the position they wanted,” Rice said. “And managers had their choice of doing the interview with them. So I’m hoping that it was a good experience for them because we did make it a point to greet every one of them that walked in.”

After seeing an online advertisement, Randy Osborn, a Muscogee Nation citizen, came to the job fair. His curiosity about available positions paid off, and Gunter hired him as a security officer. Osborn appreciated the ability to complete the process from application to interview in one day.

“I come in and applied for about three different positions, and they talked to me about the security and everything. And it was a nice job fair. It was a lot nicer than I thought it would be. And the hiring process is great. It was quick,” he said.

CPN welcomed close to 100 employees throughout the three events.

Both Rice and Gunter always highlight the Tribe’s many positive attributes as an employer, including competitive pay, insurance plans and more. CPN has many employees who stay with the Tribe for 20, 25, and even 30 years or more.

“I always tell (applicants) about the benefits that we have and that generally, CPN does take care of their employees,” Rice said. “It’s a great place to work for. We have other employees that been with us for a while. … And so I just try to sell them on how I feel like it’s a family atmosphere working for CPN.”

Although Osborn started his job only a few months ago, he has enjoyed his time with the Nation.

“I’d recommend them in a heartbeat,” he said.

With nearly 100 positions still open, Citizen Potawatomi Nation seeks to employ skilled people in many different fields, meaning there is something for everyone. Check out job listings and opportunities at firelakejobs.com. Follow CPN on Facebook @citizenpotawatomination.