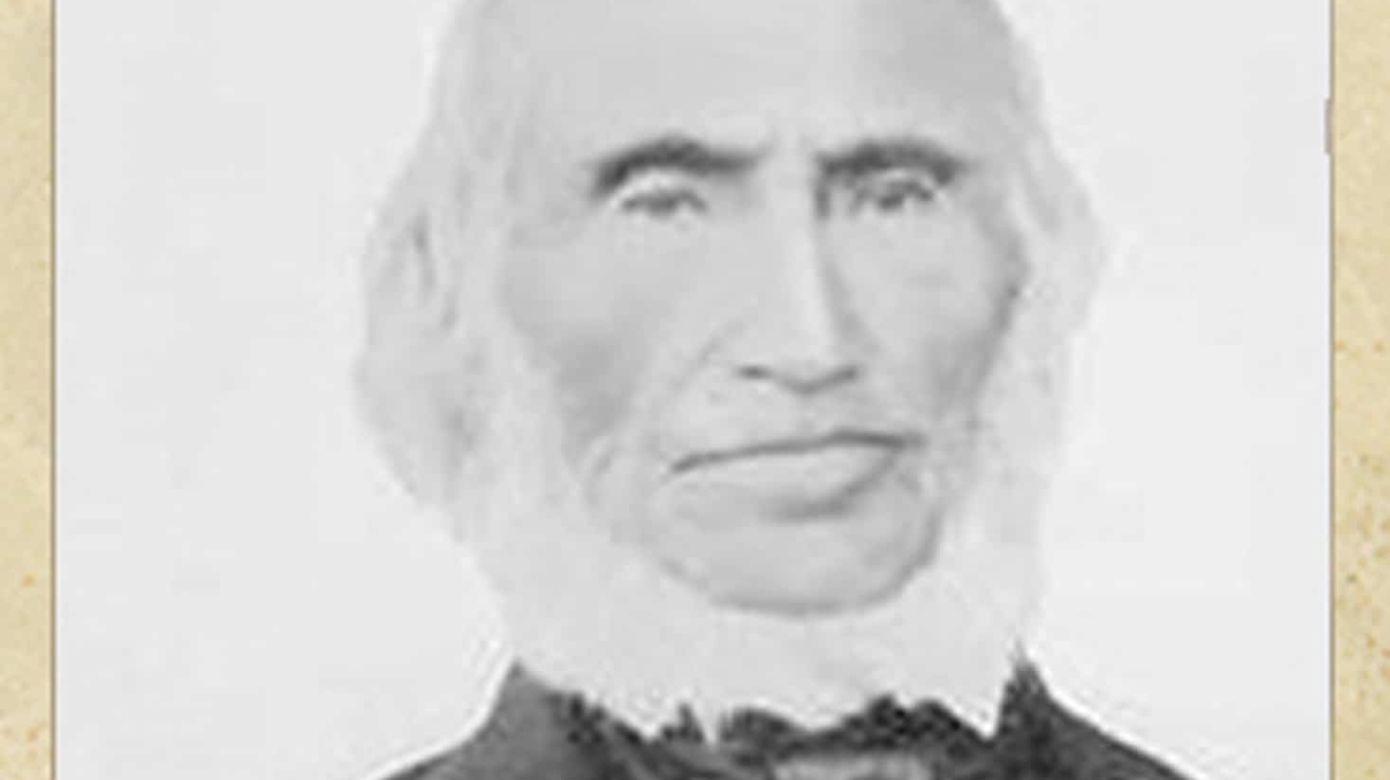 The Citizen Potawatomi Nation’s Cultural Heritage Center provides resources to keep the Tribe’s history safe and accessible for generations to come. One key way the Nation does this is through the CHC’s archives. To highlight some of these holdings, the Hownikan is featuring photographs and family history for every founding Citizen Potawatomi family. If interested in assisting preservation efforts by providing copies of Citizen Potawatomi family photographs, documents and more, please contact the CHC at 405-878-5830.

In the early 17th century, brothers Jean and Gabriel Bertrand left the Province of Poitou in western France for North America, seeking the opportunity for a new life.

Jean became a farmer and settled between Rivière-du-Loup and St. Pierre along the St. Lawrence River in Canada. He married Marie Charlotte Brar dit Riverdra in 1697, and they had nine children. Their oldest, Jacques, was born in 1699 in Montreal. Although he became a mason, his adventurous spirit lured him into the fur trade.

Jacques’s grandson, Joseph Bertrand Sr. carried on the family fur trade vocation. Joseph Sr. was born on Oct. 8, 1778, on Mackinac Island in Michigan. In 1804, Joseph became employed with the American Fur Company. He met and married Nona, daughter of Daniel Bourassa I and an unknown Potawatomi woman. Records indicate Potawatomi Chief Topinabee raised Nona as his own. Joseph Sr. and Nona’s union brought the Bertrand family and Potawatomi together.

A priest visiting from Saint Anne’s parish in Detroit ratified their marriage in August 1818. During the ceremony, Nona received her Christian name, Madeline. The couple established Bertrand’s Settlement on the west bank of the St. Joseph River, near present-day Niles, Michigan.

There, Joseph built a cabin, and the couple found success in the fur business and their trading post. They had seven children: Joseph Jr., Samuel, Benjamin Henri, Laurent, Alexander Amable, Theresa and Julia Justine. Madeline continued participating in her Potawatomi culture, and some records indicate she preferred to live in a wigwam behind their cabin and dress in traditional attire.

While tribes across the Great Lakes region dealt with the War of 1812, Joseph Sr. attempted diplomacy and tried to appease all involved due to the Hudson Bay Company’s regional dominance. Unfortunately, his efforts did not impress the British. They placed a £100 bounty on his head for his role as interpreter and liaison between the United States and the Potawatomi people.

After the war, Joseph expanded his business enterprises, and 40 French and Potawatomi families moved into the community.

Madeline died in 1846, and her gravesite is in a Catholic cemetery in Bertrand Township, Michigan. In 1853, Joseph remarried Elizabeth LaPlante. Afterward, they moved to the Potawatomi reservation in Kansas to be with his children and grandchildren.

For most of his life, Joseph. Jr. worked alongside his father at the trading post and general store. He and his brother Samuel decided to move their families to Kansas in 1840 to live with Potawatomi who were forcibly removed west of the Mississippi River.

He traveled to the new reservation with Jesuit Priest Fr. Verreydt in September 1846, looking for a suitable area to relocate the St. Mary’s Mission. However, finding a permanent location took nearly two years two years. In June 1848, Fr. Verreydt found a high point where he could see for miles, and St. Mary’s campus remains at that location today.

Joseph Jr. and his family settled on the northern banks of the Kaw River, and he helped the first group of Potawatomi to the new reserve. The 90-mile journey took three weeks, and families carried only a small ration of cornmeal for food. They found nuts, berries and other edible wild plants along the way as well as occasionally consumed venison and buffalo provided by Potawatomi hunting parties.

Unfortunately, Joseph Jr. fell ill and died on Nov. 6, 1848. He is buried at the St. Mary’s Mission Sleepy Hollow Cemetery.

Joseph Jr. and Mary’s son Joseph Hamilton “Ham” was born in Bertrand, Michigan, in 1829. Shortly after his family moved to Kansas, he followed and became a merchant at the St. Mary’s Mission from the 1850s until his death in 1875. “Ham” served on a dance committee in Humboldt, Kansas, in 1858, playing the fiddle for cotillion dances — early version of square dancing — and other numbers. He also worked as a postmaster at St. Marys from April 1869 to May 1871.

Joseph’s brother Benjamin Henri received the most education of all of Joseph Sr.’s children. He attended the Carey Mission School in Michigan as a child and later the Choctaw Academy in Kentucky. After completing his education, Benjamin returned home to work at his father’s trading post for six years before establishing his own mercantile nearby. In 1850, Benjamin led approximately 650 Potawatomi from southern Michigan and northern Indiana to the St. Mary’s Mission in Kansas. He then became a trader and served on the Potawatomi Council.

A divide began on the reservation between Potawatomi who wished to remain living in common and those who desired personal land ownership and potential U.S. citizenship. As a Tribal leader at this time, Benjamin made trips to Washington D.C. on behalf of the Tribe with other headmen to discuss the allotment process.

After much inner-Tribal conflict and negotiating, Benjamin became one of 86 Potawatomi to sign the Treaty of 1861, which opened the opportunity for Potawatomi to hold land ownership individually and set aside an area of the reservation for those who wished to continue living communally, creating two separate federally recognized tribal nations.

Benjamin went on to serve on the Potawatomi Business Committee along with Joseph N. Bourassa, George L. Young, Louis Vieux, M.B. Beaubien and John Tipton. In 1866, Benjamin helped establish the city of St. Marys, and in October 1896, secured the charter for the organization of St. Mary’s Mission. He also signed the Treaty of 1867.

Benjamin was first married to Clara Whitaker until she passed away in 1866. Three years later, Benjamin married Marguerite Fabing and had two children: Benjamin Aloysius and Margaret Emma Josephine.

In 1875, Marguerite died from tuberculosis, and Benjamin passed away five months later. Benjamin’s grave as well as his wives’ are in Mt. Calvary Cemetery in St. Marys.

Laurent Bertrand was born in February 1814 on the Bertrand settlement, and his family moved to Sugar Creek in the early 1840s. He married Adelaide Keeler, and they had four children: Bernard Bonduel, Richard, Lucy Marie and Lawrence Joseph. The former born in Michigan and the latter in Kansas.

After Laurent’s death in 1849, Adelaide ran a hotel on East Bertrand Avenue in St. Marys until the mid-1860s when she moved to California.

Joseph Sr.’s youngest son, Alexander Amable, was born in 1819 in Bertrand, Michigan. While Alexander was an artist by profession, like the rest of the Bertrands, he traded and served as a Potawatomi interpreter.

In 1858, Alexander traveled to Washington D.C. with a delegation of Potawatomi, which included his brother Benjamin, to discuss the terms of another treaty. However, when the group reached St. Louis, Missouri, federal officials told them they must turn back. After hearing the news, Indian Agent Murphy traveling with the group reported that they had become angry and behaved in an “unbecoming manner.” This sparked a feud between Alexander and Agent Murphy and resulted in Alexander facing charges of liquor trafficking. He attended court in Ft. Leavenworth in 1859, and after officials released him due to lack of evidence, Alexander left Kansas for Indian Territory where he was killed in 1860.

Joseph Sr.’s daughter Julia Justine attended the Carey Mission School in Michigan and a small private school at Daniel Higbee’s home. She married Francis Xavier Alva Higbee in 1848 in Bertrand, Michigan. After their marriage, Joseph Sr. lived with them until they moved in 1853 to the Potawatomi reserve in Kansas. In 1866, Julia passed away from pneumonia in St. Marys, Kansas, and her grave is at the Mt. Calvary Catholic Cemetery.

Julia’s husband Alva Higbee was the first mayor of St. Marys after its incorporation in 1869. He passed away during the tragic explosion of Mueller and Debacker’s General Store in 1884.

Citizen Potawatomi began making the move to the reservation in Indian Territory, present-day Oklahoma, in the early 1870s. Throughout the next few decades, more than 30 Bertrands made the journey with their families. Most settled in the southeast corner of the reservation in present-day Cleveland County near Corbett and Lexington.

Some of the Bertrands that received allotments included Madeline Lena, Frances, Lawrence and Nora.

Madeline Lena Bertrand, daughter of Bernard Bonduel Bertrand and Catherine Juneau, was born in St. Marys in 1872. She married Henry Farley, and they had seven children. Madeline’s sister Frances “Fannie” Fern Bertrand was also born in Kansas in 1875. She married Ralph Hollway and had three children.

Lawrence Bertrand, the son of Laurent and Adelaide Keeler-Bertrand, married Mary Jane (Laura) Angle in 1871 at St. Mary’s. They had four children: Nora Adelaide, Lucy Ella, Laura Frances and Minnie Lucy, who died as an infant.

Nora, born in 1874 at St. Mary’s, married William Harrison Henry Clark in 1898 in Lexington, Oklahoma. He participated in the Oklahoma Land Run of 1889.

The family legacy of entrepreneurship and leadership continues today through the numerous Bertrand descendants within the Citizen Potawatomi Nation. 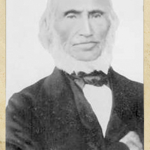 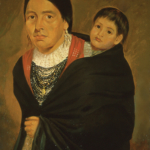