Naval officer Tyler Vinson and his wife, Allyson, enjoy serving others through the military and medical fields. (Photo provided)

Tyler Vinson joined the military partially on a dare. As a senior in high school in Jackson, California, he and his friends were walking across campus to their next class when they saw a Navy recruiter.

“I kind of looked at the paper and then started to walk (away), and my buddy said, ‘Man, you won’t sign up.’ And I was like, ‘Oh? Bet.’ So I went and signed the paper, and then they started talking to me, and it just kind of happened,” he said.

His non-Potawatomi grandfather also served in the Navy as a machinist mate and chaplain, and Vinson felt pride in continuing the tradition. The Tarter family descendant knew college remained in the future for him, if he decided to attend, and the military seemed like a viable option for building a skill set, traveling and gaining real-world experience.

In his late 20s, Vinson earned his Bachelor of Science in workforce education and development from Southern Illinois University. He wanted to become an officer after spending more than ten years on active duty, and the path fit his future.

“I figured as somebody coming from the enlisted side to the officer side, I would be able to relate to the sailors that work under me and kind of help them understand why we’re doing what we’re doing and make them actually want to do it. Whereas if somebody just tells you, ‘Do this because I said,’ it’s less motivating,” Vinson said.

During the 10 years he spent on active duty, Vinson traveled around the world — Bahrain, Turkey, Qatar, Japan, the Philippines, Indonesia and more. He and other members enjoyed observing each place’s unique culture and taking part in different highlights of the local flavor. They bought hand-tailored suits in the Middle East at a deep discount, and Vinson got a traditional tattoo while in Japan.

He built up more than 2,000 hours as part of a flight crew on two types of anti-submarine and maritime surveillance aircraft. His position required training on oceanography, Doppler theory, sonar and more, primarily to track submarines.

“It’s fun being up in the air,” Vinson said. “The crew mentality’s a lot of fun stuff too, where you hang out. You become real close with the people on your crew … because you’re doing eight, 10 hours in a plane with them, just kind of hanging out and talking while you’re working, kind of thing.”

To advance his career, Vinson is preparing for flight school to become a Navy pilot. Years of training lie ahead of him, but his attitude remains relentlessly positive.

“I want to go back and fly the planes that I was already flying on when I was on the enlisted side … but it’s not guaranteed. I could end up flying helicopters or whatever else, whatever they need. But I’m excited just to fly. I think it’ll be fun,” he said.

Vinson considers himself an extrovert, always willing to meet new people or help someone talk through a problem. In the last few years, he discovered he enjoys teaching as well. That personality trait presents itself as an advantage, especially when working with children.

The Navy’s Drug Education for Youth program encourages personnel to volunteer as mentors for youths between 9 and 18 about the dangers of drug use, bullying, alcohol and more. Military members sign their children up to participate in DEFY, and Vinson volunteered with the program while on active duty in the 2010s.

“And then one week, we’d do a summer camp where we’d go to a camp, and we’d teach them, and we’d play games, and we’d do all that kind of stuff,” Vinson said.

“It was kind of cool for me to be able to teach kids about drugs and safety and staying away from them and how they can ruin life and stuff like that.”

As he moved up in rank, he also began showing new members the basics of the planes’ systems.

He did not anticipate developing many of the skills he now teaches and credits the Navy with opening him up to new possibilities.

“The military is a really good option for anything that you want to do,” he said.

Vinson will begin flight school later this year, and encourages those interested in military service to research options beforehand.

The Citizen Potawatomi Nation Cultural Heritage Center honors Tribal members who served and places their pictures on the Veterans Wall of Honor. If you are a veteran or active duty military and would like your place on the wall, provide your information at info@potawatomiheritage.org. 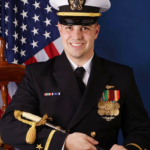 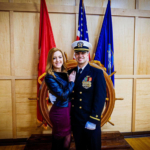