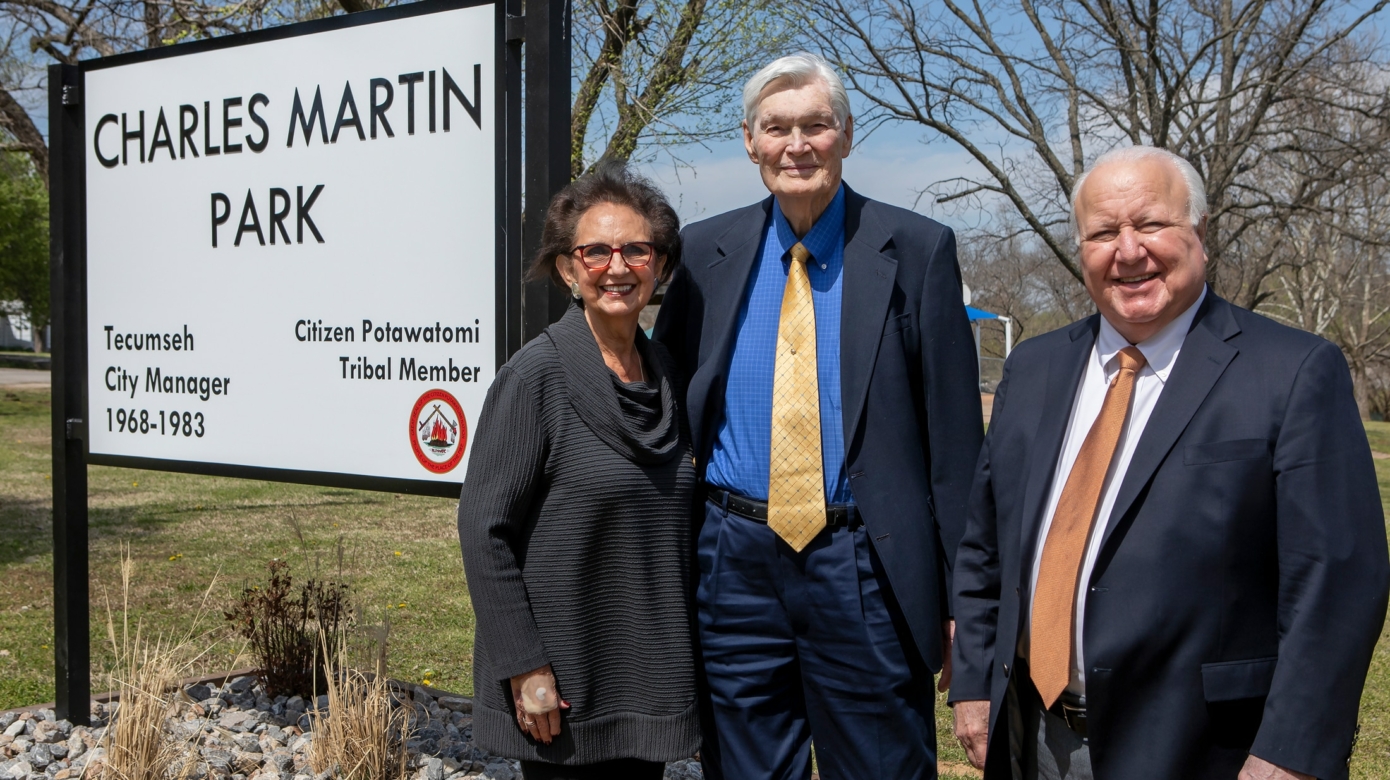 The Charles Martin Park in Tecumseh, Oklahoma, near Citizen Potawatomi Nation tribal headquarters, provides a fun, safe space for families to play. The city built it in the mid-1970s as part of a restoration project to improve and update the surrounding neighborhood. Construction began as part of the second large improvement project during CPN tribal member Charles Martin’s time as Tecumseh city manager.

“I’m proud of the park, but when I think about it, I think about the rehabs that we did on the homes and really helped those people out,” he said. “And this was almost in the center of Tecumseh where we had a dilapidated section that needed attention. And so the housing project was one that drove this whole project.”

Former Tecumseh Mayor Newt Copeland named the park after the Burnett family descendant to honor his contribution to the city and the neighborhood.

The Tribe replaced the dilapidated wooden sign with Martin’s name on it and unveiled a new, large metal one in April. His oldest daughter, Kim Nootbaar, and CPN Vice-Chairman Linda Capps noticed the old sign’s degradation and wanted to improve it.

“I was proud to be here and am proud to be here, and I was proud of my dad for leading the city the way he did. And I thought it was very sad to watch it just fall into disrepair, and nobody was doing anything about it. And that’s why it was important because people need to remember,” Nootbaar said

Martin worked hard to improve the quality of life for Tribal members and Tecumseh citizens throughout his 15 years as city manager.

“While Charles was at Tecumseh, our Tribe had just begun to be a major influence in the community. In fact, we were still named the Citizen Potawatomi Tribe of Oklahoma. The City of Tecumseh, too, had begun making important strides under Charles’ leadership. I am honored that one of our own Citizen Potawatomi members played a key role in the modern history of Tecumseh,” Capps said in a 2018 Hownikan column.

The Martin family’s house was adjacent to the park. Nootbaar and her sister Patti Lamle helped maintain it and the other municipal park in town, painting the tennis courts and repairing the nets. While developing the layout, Martin took his daughters to other outdoor public spaces in the surrounding cities for inspiration. They played on the equipment and evaluated the possibilities. The choices later influenced the construction of the park, and Nootbaar remembers those trips fondly.

“It was fun because we got to see so much and do so much,” she said.

Martin’s goal was to “give kids a place to run and romp, and throw the ball and play basketball. And to get exercise. (It’s) wonderful to walk and get exercise. And so I think that’s important, where they can get out of the house and do something in the park.”

The family’s connection to the area goes back generations. Both of Martin’s grandparents on both sides resided near Tecumseh. His grandmother, Birdie Josephine, walked from Kansas to present-day Oklahoma as a child when her parents took Tribal allotments in what is now Pottawatomie County.

While Martin currently lives in Altus, Oklahoma, he and his daughters still feel their ancestors’ presence in the city and admire their father’s service.

“He poured his heart into everything he did, but he loved this town,” Lamle said. “So whatever he could do to better that and the families in this community, that’s what he wanted to do. He’s a good one.”

Thanks to the new sign, Martin’s mark on the area will remain sturdy and visible for his grandchildren and great-grandchildren for years to come.

“It’s a great honor that the Potawatomi were willing to … build a new sign,” Martin said.
The Tribe plans to maintain the new structure for the foreseeable future.