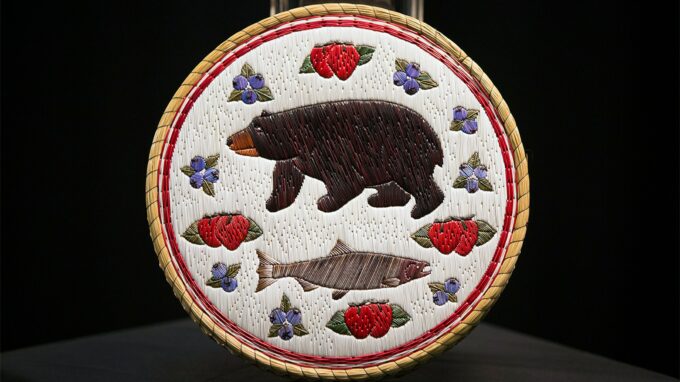 Commissioned as a gift for a spiritual leader among the Three Fires communities of Walpole Island, Ontario, Canada, this quill box by Clarence Pangowish honors the leader’s clan and their role as keepers or protectors of medicine.

Porcupine quills have inspired recent research into improving the design of hypodermic needles and surgical staples, but Nishnabé people have used them for practical and artistic purposes for hundreds of years.

Quill art uses the structure of the mammal’s primary defense mechanism to create sturdy and beautiful hand-made applique quill boxes, headdresses, jewelry and much more. While some traditional items serve utilitarian functions, the vast majority of the objects made in the last 150 years remain purely artistic.

However, it is a dying art form. Wasauksing First Nation member Shelley Baker carries on the tradition today, teaching other tribal members how to collect gawyek (quills), wigwas (birch bark) and wishkbemishkos (sweetgrass).

“What people don’t realize or understand is the work that goes into gathering your supplies for making a quill box. I was really fortunate at a very young age, like 6, 7 years old, and getting those teachings from my grandmother. So when I go out, I close my eyes, and she’s with me. She’s with me all the time,” she said.

Baker began making quill boxes at 8 years old or younger. She remembers modeling the style after her grandmother’s and aunt’s work, always attempting to mimic their beauty and precision.
“It was a really great time for me as a child growing up to have that with her, and … her showing me how to pluck the porcupine and what to do,” Baker said.

“There’s a lot of Aboriginal women or men that I’ve met who have their different ways or different teachings of how they gather the supplies.”

The surrounding community knows her as a quillwork artist. She obtains porcupines to pluck from others who come across roadkill and either call her or bring them to her home. She does not hunt. Removing the quills while preserving their structure requires practice.

“I look for someone that has a woodstove for like the ashes from the woodstove. … They give me a better grip when I start from behind the head of the porcupine and then pull the quills out,” Baker said.

Both the seasons and the porcupine’s age make the task more or less complicated and affect the quality.

“Porcupines aren’t good during July and August because it’s almost like they’re molting their quills, and in the ends of the bottom of the quills, they retain water or they break off. So they’re no good to use unless you’re making, let’s say, necklaces or earrings,” she said.

Older porcupines sport longer, stronger pieces, and their thick winter coats present an additional challenge. She pulls the quills whole with no breaks or tears.

“Once I’m done with the porcupine, then I go bury it,” Baker said. “And I thank the Creator for the gift that they have given me, and I put my tobacco down.”

Baker cleans the quills before beginning the coloring process. Dyeing the quills requires a significant amount of time, especially to achieve different shades of certain hues.

“I put water in (a pot) to boil, and then I’ll pour the dye in there, the powder dye, and make sure that it’s all mixed into the hot water. And then I add just a little bit of vinegar because the vinegar holds the color,” Baker said.

After sorting the colors, she closes her eyes and envisions the image she hopes to make after threading the quills to the birch bark. Some of her favorites include animals and different flowers. The soaking and hot water make them flexible enough to build three-dimensional structures as part of a box lid. Baker has made many boxes for her family.

“I used to do cool pictures for my mom, and I used to do Blue Jays. And when people would look at my quillwork, they were like, ‘Those aren’t quills. That’s a picture.’ I said, ‘No, they’re quills,’” she said and laughed.

Sorting the quills and placing them side by side is a time-consuming process, meant for those with a steady hand and vigilance to the art. Baker’s eyes often tire by the end of a long session, and she prefers natural light while working. The more important lesson behind the process of creating a box escaped her as a child.

“You have to have patience to do this,” Baker said. “At a very young age when I learned, not knowing what my grandmother was teaching me at the time until I got older — she taught me patience, which I have a lot of.”

Now, she passes on quillwork to others and believes in the importance of Native Americans returning to their cultures and unique art forms. She provides constructive criticism while watching students work, providing tips and teaching them how to fix mistakes.

“I always say, ‘It’s your first one. It’s going to be unique. It’s your creation,’ which, it is. And the thing is with teaching kids or teaching other communities, adults, elders, watching their creations — it’s just beautiful because it’s theirs,” Baker said.

The Citizen Potawatomi Nation Cultural Heritage Center displays several pieces of quill art, including boxes. Some are available for online viewing at potawatomiheritage.com.