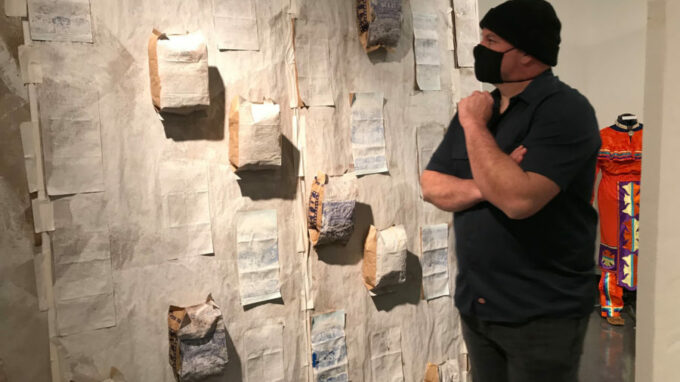 Citizen Potawatomi Nation member Christina Foster’s artist portfolio shows her growth and self-discovery gained throughout her education. Much of her work centers around self-exploration and displays both her artistic process and final results.

The Schrepfor family descendant graduated with her Bachelor of Arts in studio art from the University of Central Missouri in December 2020, working on her final projects and classes from home amid a global pandemic. Most art emanates on a physical process dependent on time in a studio, dance hall or ceramics workshop, and Foster focuses on painting, installation art and dancing. Her final studio class provided a more rounded experience by including in-person portions of instruction.

“My painting professor would walk around, and he would look at our paintings, and then we’d talk about them. And he’d give a little bit of critique or ask questions about where it’s going to go from there or talk about some different techniques and stylization that I could experiment with. So that was really nice, but it’s been weird,” Foster said.

She created an imitation art gallery called Museum of Contemporary Mixed-Indigenous Experience for her senior showcase that highlighted her work from the past several years. It ran at the end of 2020 at UCM’s Gallery 115. The installation piece encouraged people to consider how museums present Indigenous cultures, history and art as they walked through Foster’s satirical representation.

“The low lighting and the way that they’re talked about makes the culture seem like they’re something of the past or something that doesn’t exist anymore, whereas these cultures are still existing, but they’re just more modernized and contemporary than they’re often displayed in the museums,” she said.

One prominent symbol throughout the exhibit was mdamen (corn). Nishnabé people rely on corn as a dietary staple and essential part of a Three Sisters planting method composed of corn, beans and squash. Foster used the vegetable to represent Potawatomi people and their ability to maintain their culture and overcome obstacles.

“Corn is a very dependent plant,” she said. “It’s not going to produce much if you just grow a single stock. It is a resilient plant, the way that it retains water and stuff like that. And it’s a strong plant, but it’s not going to thrive unless you have a lot of them.”

Bags of popcorn painted white lined her project’s walls. They become fuller and fuller as viewers move deeper into the exhibit, showing Foster’s journey in finding her Potawatomi heritage.

“That is kind of a metaphor for mixed Indigenousness, because then once they’re popped, you can kind of see the color of the bag, and their kernels have been popped and are flourishing and stuff like that. But they still have the white front, which is like a mixture of different cultures … but being able to thrive,” she said.

The popcorn also invites attendees to explore Indigenous cultures for themselves and encourages them to gain more knowledge as they move through the installation and look at other displays. Foster believes installation art gives attendees a full experience with a range of emotions rather than one piece to view and consider.

In 2017, Foster attended the Potawatomi Leadership Program, a six-week immersive summer internship at CPN for high school seniors and college freshman with a year or less of post-secondary class credits. Participants learn about the Tribe’s history, culture, government, businesses and more. It also includes the annual Family Reunion Festival and a naming ceremony, and Foster was given the name Yabwe Kwé or Dreamer Woman.

While she knew about her Potawatomi ancestry and tried to participate in Tribal culture as much as possible in her youth, the program opened up a door to a new set of knowledge and experiences. Her artistic possibilities also grew and took on a new meaning and message.

“That was also when I felt like I could actually start making work about (Potawatomi culture) because I felt like I didn’t know enough before. … And so just continuously educating myself and staying in contact with other people from the PLP and just with the Tribe in general and trying to stay connected has really helped me find my voice, I guess, in my art,” Foster said.

She presented the Museum of Contemporary Mixed-Indigenous Experience as a collaboration between Christina Foster and Yabwe Kwé, representing the two sides of herself and her art.

“Whenever I’m making pieces that are more like Indigenously themed, I’m going to use Yabwe Kwé, whereas if it’s more like Westernized or not necessarily talking about those subjects or it just falls into this more conceptual art realm, then I use Christina Foster. The ones where they kind of mix, I like to make them collaborations,” she said.

It also started conversations about her multiple identities and led viewers to consider their own defining characteristics.

“I just feel like I am growing from it, and it just has inspired me to learn more about both sides of everything. … I’m always thinking about the way things are going to be perceived by other people and the way that I’m dealing with appropriation in the opposite way,” Foster said.

For more information on the Potawatomi Leadership Program, visit plp.potawatomi.org.