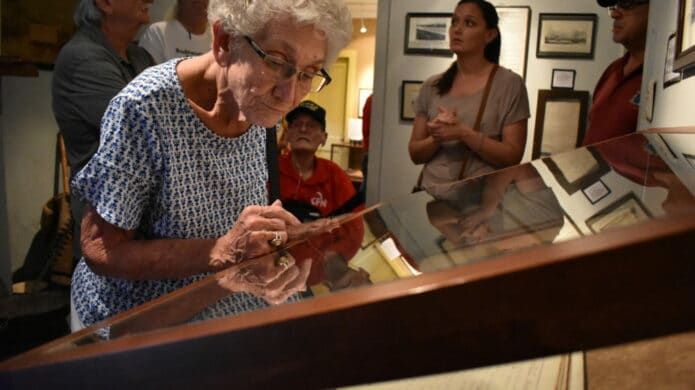 In this episode, we’ll hear about the history of the Potawatomi census book of 1862 and the Tribe’s efforts to gain ownership, an environmental activists’ stay with CPN during her journey hiking across the U.S. as well as the behavioral health department’s smoking cessation classes.

The Potawatomi census book of 1862 remains a vital foundational document for the Citizen Potawatomi Nation; however, the Nation does not have it in its possession. CPN staff first saw it at St. Marys Indian Pay Station Museum in St Marys, Kansas, in 2006. The artifact documents the Nation’s beginning, and members and staff of CPN have spent almost 15 years attempting to gain custody from the city’s historical society, including Dr. Kelli Mosteller, director of the Citizen Potawatomi Nation Cultural Heritage Center.

“I do think the staff at the Pay Station has recognized how valuable this is, probably because we continue to tell them, and taken steps to improve the care of the book,” she said. “But, it’s a book that’s 150 years old. If you’re not paying attention and doing everything you can to preserve it, each decade can really put wear and tear on the book.”

Dr. Mosteller and CPN District 4 Legislator Jon Boursaw work to keep the census book of 1862 at the forefront of people’s minds and strive to make it part of the CHC’s permanent collection.

Hiker and environmental activist Hannah Bacon decided to reduce her carbon footprint and make a statement. In late November 2020, she took off from Santa Cruz, California, determined to walk across the United States. She stayed at Citizen Potawatomi Nation’s campgrounds in March 2021 as she trekked across Oklahoma. When she spoke with HownikanPodcast on a very windy day, Bacon had walked more than 1,600 miles with approximately 1,400 to go before reaching her destination — Virginia Beach, Virginia.

“Sometimes I feel like I’m in a time warp, and all of a sudden, a month has passed. And I’m like, ‘Oh, wow, how did I get here? What happened?’ … I’m proud of the distance that I’ve come. Sometimes when I think, ‘Wow, I walked here from California,’ it really kind of gets to me,” she said.

She documents her progress on a blog and Instagram to raise money for Sunrise Movement, a youth-led political action organization to bring awareness to climate change and creating green jobs.

While rates have decreased by approximately two-thirds in the last 50 years, the Centers for Disease Control and Prevention reported in 2019 that 34.2 million Americans smoke cigarettes. Its prevalence among American Indians/Alaska Natives remains high at 1.5 times the national average, or 26 percent. Citizen Potawatomi Nation Behavioral Health Therapist Ray Tainpeah said tribes across the state have been working to further reduce smoking rates for years. He started leading the department’s smoking cessation classes for Tribal members and employees in 2005.

He also incorporates Native uses of organic tobacco as a part of prayer. At the end of the course, attendees make tobacco ties using the medicine wheel’s colors — red, yellow, black and white. Tainpeah believes for many attendees, it’s an eye opener.

For more information from the Behavioral Health Department, visit cpn.news/CPNBH or call 405-214-5101. Read more from Keep It Sacred at keepitsacred.itcmi.org.

For more information and opportunities with language, including self-paced classes, visit cpn.news/language. You can find an online dictionary at potawatomidictonary.com as well as videos on YouTube. There are also Potawatomi courses on the language-learning app Memrise.