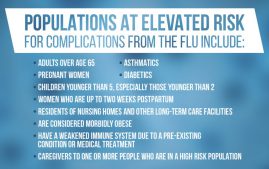 During the 2017-2018 flu season, 291 Oklahomans died and almost 5,000 people were hospitalized due to the flu or complications stemming from it, such as pneumonia or bronchitis.

Nationally, more than 900,000 people were hospitalized during the previous flu season, according to data from the National Foundation for Infectious Diseases. Elders accounted for an estimated 70 percent of those cases, along with 90 percent of flu-related deaths.

Symptoms include the sudden onset of chills, aches, fever, fatigue, coughing or sinus congestion. Diarrhea and vomiting are also common warning signs among children. It is transmitted most commonly through coughing or sneezing, and a person can spread the disease before his or her own symptoms start appearing.

Depending on the specific inoculation, the vaccines offered this year across the United States protect recipients against up to four influenza viruses that research suggests will be the most prevalent, including Influenza A (H3N2) and Influenza A (H1N1). Vaccines, whether in shot or nasal spray form, take about two weeks to become effective.

“Getting the flu shot isn’t just about keeping you safe and healthy,” U.S. Surgeon General Vice Admiral Dr. Jerome Adams said. “Getting the flu shot is about community; it’s about everyone else around you. Those 80,000 people who died last year from the flu, guess what? They got the flu from someone. Someone passed it along to them. So, it’s critically important that we impress upon folks that it is not just for them. It’s their social responsibility to get vaccinated.”

In an effort to lower the mortality and hospitalization rates during the upcoming flu season, county health departments across Oklahoma started offering flu vaccinations Oct. 1. The shots are available with no out-of-pocket costs for recipients, although people with private insurance are asked to show their card and coverage.

Data previously published by Centers for Disease Control and Prevention shows that American Indians and Alaska Natives have a higher fatality rate from the flu and flu-related complications, such as pneumonia. Researchers have not determined a definitive cause for the increased risk.

However, Indigenous populations do have higher rates of several elevated risk factors for contracting the flu, including diabetes, heart disease and obesity.

Additionally, according to CDC data, Native American and Alaska Native children had the lowest vaccination coverage rate of any race or ethnic group during the 2017-2018 flu season. Among children 17 years old and younger, 53.8 percent received a flu shot. Babies and toddlers aged 23 months and younger had the highest vaccination rate among all Native children at 71.2 percent.

Those figures do not include Native children who self-identified as multiracial.

A 2017 study published by the CDC showed that getting a flu vaccine reduced a child’s risk of dying of dying from the flu or flu complications by up to 65 percent.

A member of the Loon Clan, Annika Hyscher is a CPN second-grade student in Tulsa. Her school’s gym teacher was one of the fatalities during the 2017-2018 flu season, so she is all too aware of what she needs to do to minimize the risk of getting sick.

“I don’t sneeze on people,” she said. “I sneeze into my arm instead. And if they’re sick, I leave them alone until they’re better.”