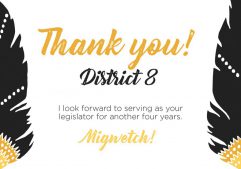 First and foremost, I would like to thank the members in District 8 for their support of me in the role as District 8 legislator. It has been a great experience thus far, and I have received far more than I have given — I have made tremendous friends, who sometimes feel more like family. I’ve also had some great adventures along the way.

This year is the first election that I did not have anyone running against me. Therefore, I have the opportunity to continue to serve you and to build our District 8 community and the greater Citizen Potawatomi Nation.

WHEREAS, Article 12, Section 6, of the Constitution of the Citizen Potawatomi Nation states that “apportionment of the Legislative Districts and any boundary changes necessary to reflect reapportionment shall occur every ten (10) years, after the initial reapportionment and boundary descriptions set by appropriate legislation …”; and

WHEREAS, Article 7, Section 1 of the Constitution of the Citizen Potawatomi Nation further states that Legislative Districts shall be equally apportioned, within 30 percent, by population; and

WHEREAS, due to shifts in tribal population since the district apportionment done in 2007, the district populations no longer meet the 30 percent threshold.

To summarize, the districts need to be fairly equal in population, regardless of geographic area. That is why District 8 now stretches from the Pacific coast to Minnesota and then reaches out to Alaska. District 8 lost Nebraska. However, it gained Iowa and Minnesota.

I would like to reach out to the members living in these two states and welcome them into District 8. As readers have seen many times in most legislators’ columns, Tribal Rolls does not and will not share contact information. That is why we beseech the members to contact us.

I would love to hear from you, either by email, phone or U.S. mail. This would provide me with some idea of where members live and where there may be interest in having a gathering in the future.

In addition to gatherings, I would like to send you regular email updates, links to the monthly Hownikan tribal newspaper online when it is published and access to a closed Facebook page just for sharing in our district.