“After expending a total of $1.3 billion to date, it is my view that Interior has not been successful in materially reducing fractional interests,” Cason said. “In my mind we are almost back where we started eight years ago, just merely treading water.”

The $3.4 billion Cobell Settlement resulted from a lawsuit filed by the late Blackfeet citizen, Elouise Cobell. The class action lawsuit stated that the federal government’s  mismanagement of leases held in trust for tribal members across the U.S. – specifically ones with multiple owners as a result of the 1887 Dawes Act that partitioned tribal lands – resulted in nearly three million acres of fractionalized land across Indian Country.

There are approximately 243,000 owners of about 2.9 million fractional interests on reservations across the country. Those who sell their interests will receive payment automatically in their Individual Indian Money accounts. However as the DOI’s Carson noted, the issue becomes more problematic each day as more lease holders pass away, further fractionalizing their property holdings. 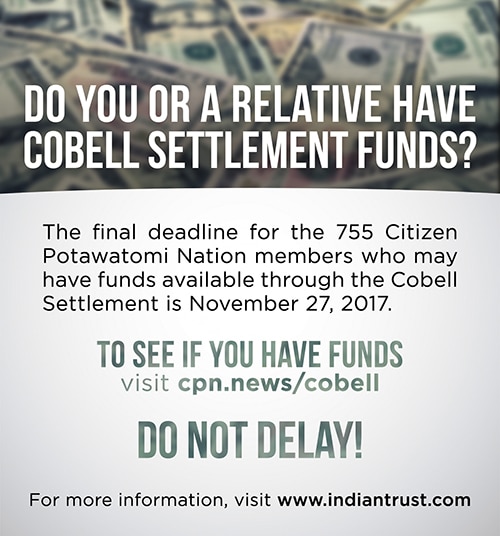 Though many have filed their claims, Citizen Potawatomi Nation has more than 755 members who have yet to submit documents for payments with the Cobell Settlement. To see if you or a family member is on that database, visit cpn.news/cobell. However the window is closing, the last day for names on the database to contact the settlement program is November 27, 2017. Visit www.indiantrust.com for full information on settlement claims.

Though the land buyback program’s long term existence remains problematic, the settlement has had some positive outcomes. As a part of the federal government’s settlement of the Cobell case, a portion of every land sale goes into a specific scholarship fund for Native Americans pursuing vocational degrees, undergraduate and graduate stories. In less than four years, the scholarship fund received $60 million from the land buyback program, the initial goal established at the outset.

“Investment in the next generation of American leaders will allow many of these young people to gain the valuable skills required for today’s competitive workforce and the knowledge and expertise needed to help their communities meet tomorrow’s challenges,” said Interior Secretary Ryan Zinke upon news of the fund’s milestone.

According to the Indigenous Education, Inc., which manages the Cobell Scholarship Program, 2,000 scholarships worth more than $55.25 million have already been awarded to
nearly 1,000 American Indian and Alaska Natives.

For the 2017 summer and fall academic terms, Citizen Potawatomi Nation had 48 students submit applications. Of those, 11 met qualification standards, and three of those have already received notification of their scholarship awards through Cobell. In the previous academic year, 15 graduate students and 37 undergraduate CPN members applied for the scholarship, while two and eight respectively received the awards. The scholarship is highly competitive and awards are distributed as much as the limited sums are able to be dispersed.

The Trump Administration has not announced a plan should the Cobell land buyback program run short of funds before 2022.