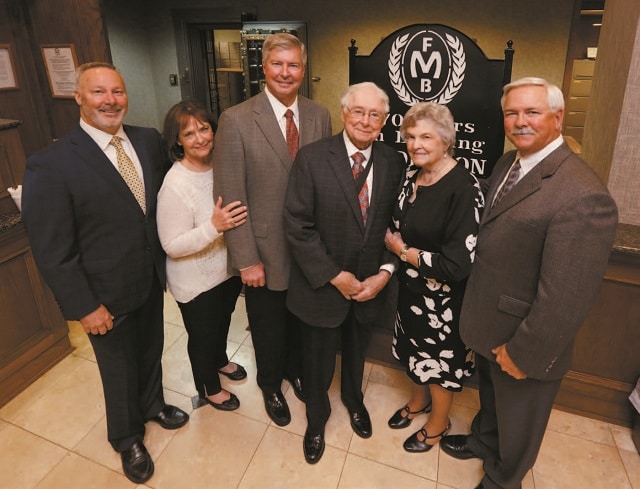 The following article originally ran in the March 19, 2017 Oklahoman newspaper chronicling the life and career of CPN tribal member John V. Anderson. It has been reprinted here with the author’s express written permission.

More than 120 guests from throughout the state converged on the lobby of F&M Bank on Monday to congratulate the bank’s board chairman, John V. Anderson, on 70 years in banking.

Anderson started in the correspondence department of Liberty National Bank & Trust in 1947, and rose to senior vice president, before buying F&M Bank in 1972. In more than four decades, he, his sons and now his grandchildren have helped grow the bank from $5 million in assets and one location to $410 million and nine locations.

Anderson, 89, still spends his mornings at the Crescent location, serving longtime customers and conducting civic business. He attends asset liability, executive and board meetings, as well as “A-PAC” meetings with the four Anderson children about donations and other matters.

“My wife tells me that I, early in our marriage, commented that I’d like to own a bank and a farm,” Anderson said. “I never imagined I’d one day do both,” he said. “I was financially broke. That was just a dream.”

Anderson took a break from his celebratory reception to talk about some of the highlights of his life and career. This is an edited transcript:

Tell us about your roots.

I grew up in Choctaw during the Great Depression. My dad was laid off from OG&E in 1930 and didn’t have another regular job until 1941 when he went to work at Tinker. My mom’s father farmed cantaloupe, watermelon and peas, and sold the vegetables at the public market. He’d bring us produce, and my Dad’s father, who was also a small farmer, loaned us a cow so we’d have milk. My folks divorced when I was 14. My brother, who was five years younger, stayed with my mom, and I lived with my dad and his parents. My dad was drafted during World War II, and signed the papers so I could enlist in the Navy at age 17.

Mess cooking and every other crappy job there was. I completed boot camp in San Diego and served on the USS Siboney in “Operation Magic Carpet.” We’d transport sailors and soldiers from the Pacific to Pearl Harbor and San Diego, and go back for another load. It was pretty joyous, because they all were on their way home.

How’d you get into banking?

My childhood friend from Choctaw, the late Pat McKinney, encouraged me to apply at Liberty. As ex-G.I.s, we were paid $20 a week for 52 weeks, as long as we were looking for a job. I hired on in 1947 under an on-the-job training program for G.I.s, as a messenger, pulling a dumb waiter of deposits and checks, and making trips around town. After a couple of months, I was promoted to bookkeeper where I worked for three years, then to the teller line for the next three, and on to auditing for 16 years. By the time I left Liberty, in 1973, I had been promoted to senior vice president in charge of operations. In the beginning, I had no specific goals; only to the best at every job to which I was promoted.

You earned 30 hours of college credit with Oklahoma City University. Why didn’t you go on to graduate?

OCU offered downtown classes then, and I took classes after work until I exhausted all of my G.I. benefits. I couldn’t afford to continue. By that time, I’d married and was working a second, night job as a bookkeeper for the Auto Hotel downtown. On Saturdays, I worked as a teller at a bank in Midwest City. But Liberty was very good about encouraging us to take banking courses through the School of Banking, the American Institute of Banking and the Bank Administration Institute. As long as you passed, the bank paid for your books and tuition. I had some really great mentors at Liberty, including Morrison Tucker, Harvey Everest and Orvis Rundell, who’ve all passed away. They helped move my career along and I’m forever indebted.

How’d you meet your wife?

Jo worked at Liberty, sorting checks in the transit department, which was next to the bookkeeping department. She was engaged to another fellow when I met her, but all 16 of us bookkeepers, mostly ex-G. I.s, gave her a hard time about her fiance, who’d come in to visit her, wearing a hat with his pant legs rolled up. Jo and I started dating after she broke off her engagement, and we married six months afterward. She was pretty, snappy and had a sharp disposition.

In September 1972, at age 45, you bought what was then Farmers & Merchants Bank in Crescent. Why’d you decide to buy a bank?

I’d been on audits for Liberty up here. Then, as a favor to its former owner, the late J.I. Gibson, I’d sat in on a few board meetings to offer advice. When J.I. began to have health problems, he wanted to give me the first chance to buy the bank. I told him I appreciated the offer, but that I had no money. I told my colleagues at Liberty of the opportunity, and they agreed to lend me $548,000 on sweat equity alone. They figured I knew enough about banking to secure the loan. I didn’t take over as president and CEO until January 1980. I figured the bank wasn’t large enough to afford my salary, so I brought in my longtime friend, Pat McKinney, while I worked five years as president of First National Bank of El Reno and two years for United Oklahoma Bank in the Oklahoma City Stockyards. A few months after I bought F&M, in February 1973, the bank made a whopping $30.27. It’s funny now, but it was far from funny then. I laid awake at two in the morning, wondering what in the world I‘d done. But through sound loan and investment philosophies, and great banking staffs, we’ve built a success.