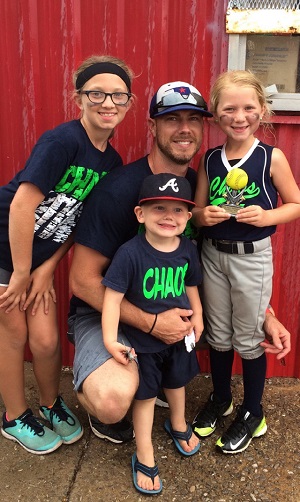 The Journal Record newspaper recently honored Citizen Potawatomi Nation Tribal Gaming Commission Executive Director Daniel LeClaire in its Achievers Under 40 Awards for his service to the tribe and community.

CPN Vice-Chairman Linda Capps nominated LeClaire for the awards and praised his work for the Citizen Potawatomi Nation.

“As an employee with a keen intellect for team work, he is an integral part of activities both within and outside of the workplace,” said Capps. “Not only is he an outstanding employee and volunteer, he is also a wonderful father, son, brother and uncle to a host of relatives.”

Daniel, a descendant of the LeClaire and DeLonais families, has worked up the ranks since starting as a tribal police officer in 2006. He initially joined the CPN Tribal Police Department following his graduation of the collegiate officer program through Rose State College and Oklahoma State University-Oklahoma City.

He served as a patrolman for the tribal police for three years before joining the CPN Gaming Commission in 2009 as an investigator, where he ensured integrity and security of the tribe’s gaming operations by investigation and enforcing tribal, state, and federal laws and regulations.

Asked about his approach to the jobs he has held at CPN, LeClaire replied that “I want to lead a life that makes my family proud, and I try to measure my actions and decisions each day in my roles, whether at church, in the office or other arenas, that reflect that goal.”

In 2014 he was named executive director of the gaming commission. As executive director he is tasked with managing the day-to-day business of the gaming commission staff of 20 who protect the assets of the tribe’s gaming enterprises and regulate all forms of permissible and authorized gaming within the Nation. He oversees internal auditors and compliance officers who ensure fairness and consistency with all gaming regulations and laws. The Bank Secrecy Act/ Anti-Money Laundering Department certifies compliance with Title 31, a federal law intended for casinos to track cash and to deter criminal activity such as money laundering and structuring from individuals and terrorists. The investigators, who examine internal and external criminal activity as well as policy and procedure violations in order to protect tribal assets. The commission’s IT department takes on a large range of responsibilities which vary from desktop support to assisting with network security. The licensing department for the commission conducts background investigations on all employees and vendors who are conducting business within the tribe’s gaming facilities.

“Daniel has always strived to not only continue to grow his own knowledge of the ever-changing pace of gaming but also displays an unwavering commitment to ensure his department team members are getting that same access to education and training,” said Jodi DiLascio, Director of Tribal Gaming for BMM Testlabs, a firm providing technical and regulatory compliance services. “I believe this is just one example of the strong leadership qualities that Daniel displays in his role…(he) is effective, efficient and has the highest ethics of any regulator I have the honor to work with.”

When not serving in his official capacity as executive director of the gaming commission, LeClaire is also a member of the Oklahoma State Athletic Commission and the CPN Boxing Commission. He sits on the Shawnee Educational Foundation Board and is an active volunteer with Life.Church serving as a Switch Leader and Loop Leader. He’s a member of the Squirrel Creek Singers and serves as co-arena director during the tribe’s festivals. His favorite role is being a father to Ava, Liana and Luke.