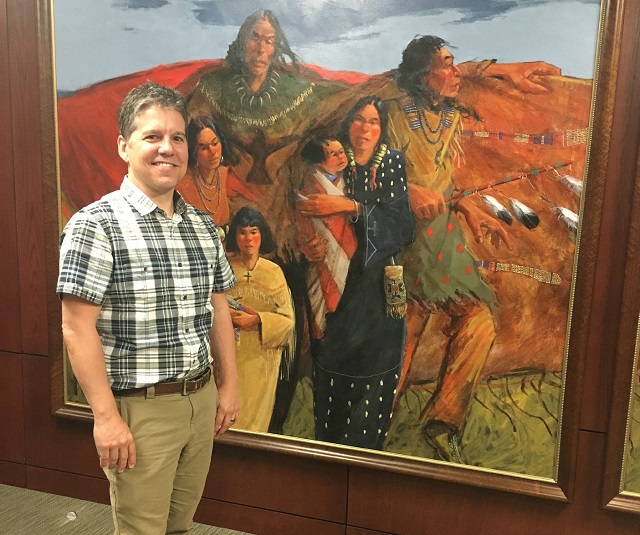 While the Federal Reserve System is often in the news for its role in setting American monetary policy, the bank’s responsibilities in the world’s largest economy are wider than setting the benchmark interest rates. One such role involves examining and ensuring the stability of financial institutions across the U.S., from large multinational banks to the small town bank in rural America. Citizen Potawatomi Nation tribal member Michael Combs is integral to that mission in his role as an assistant vice president for the Fed’s Oklahoma City branch.

Though he serves in an organization with offces across the U.S., Combs has stayed close to his hometown of Oklahoma City throughout his career. He is a graduate of Bishop Mc- Guinness High School and the University of Central Oklahoma, where he completed a finance degree before graduating with an MBA from Oklahoma City University.

Unlike those who ran from their final class involving mathematics during the completion of their undergraduate studies, Combs said he always had an interest in accounting and finance. He attributed this to his work with the Fed.

“I worked full time during college in the cash office at Sam’s Club,” he recalled. “I was very interested in the monetary aspects of retail.”

On a finance club field trip to the Oklahoma City branch of the Federal Reserve Bank of Kansas City as an undergraduate, Combs said his interest in finance was piqued by the sheer volume of cash and check processing the bank oversaw at that time.

“I took that job and haven’t regretted it a single day since,” said Combs. “I spent several years early in my career on the road visiting very small banks around Oklahoma and just getting to know how the banking system works and how community banking was such an important part of the economy.”

In a state where grandparents are still old enough to remember their own parents’ savings being wiped out during the Great Depression, the need for a well regulated and stable financial system remains paramount.

“It’s quite different from the big banks you hear about, these are usually small, family-run organizations and they provide a very important service to their local communities. Just imagine if these small towns didn’t have a bank,” Combs said.

He has been with the Fed in this capacity since joining as a bank examiner in 1994. Though today he supervises teams that provide national technology to examiners reviewing these financial institutions as an assistant vice president, he affirmed that his mission remains the same; ensuring a stable American banking system.

The Fed’s role in everyday lives of Americans is arguably so ingrained that most don’t understand its true impact. From guaranteeing a pay check clears to ensuring mortgage rates remain at the agreed upon figure in a contract with a lender, the impact of the Federal Reserve on the average American is akin to waking up in the morning, turning the faucet expecting clean, potable water to pour out, and instead having nothing. Americans don’t truly think about its presence until it’s not available.

“We are working hard, often times behind the scenes, to ensure that we have a strong banking system, so that when you deposit that check, you know that the money will be there the next day or when you put through a direct deposit, it is credited,” explained Combs.

Despite being a target of political cudgels wielded by both major political parties in the U.S., Combs is effusive of those he has worked with at the Federal Reserve.

“The amount of quality people that work there, and the trust and confidence that they try to demonstrate every single day for the public, makes me proud to work for an organization like that.”

Combs sees his role as a small part in a larger system that provides a public service in both stabilizing the banking system and educating its patrons, the American public, whose everyday lives are intertwined in the world’s largest economy.

He also cites the system’s decentralized structure – 12 Federal Reserve Banks with 24 branches in major American cities – as one of its great strengths.

“This is not necessarily a huge government agency based out of Washington D.C. or New York.,” he said.

He noted the example of Vice-Chairman Linda Capps, who formerly sat on the Oklahoma City Federal Reserve’s Board of Directors, as a testament to this. He praised those like the vice-chairman who provide local insight as business leaders to help inform the Fed’s decision making process.

“She brought her perspective about the local economy to our board of directors, she shared her experiences and the things she was seeing in the local market, and those were communicated to the president of the Kansas City Federal Reserve Bank who represented those views in Washington D.C.”

Combs, a member of the Travis-Lamirand family, said he is frequently reminded of his Native American heritage in his day-to-day work in the Oklahoma City branch of the Federal Reserve. A large mural by Mike Larsen, a Chickasaw Nation artist, hangs in the Fed’s office in downtown Oklahoma City. The painting was commissioned by the OKC branch following the 1995 terrorist attack on the Alfred P. Murrah Federal Building as a tribute to the people who died. The mural, called “Cloud People” depicts an Arapaho holy man and his family walking across the flat Oklahoma landscape. For Combs, its presence reinforces his own family heritage in a state with 39 federally recognized tribal nations.

“It’s a beautiful picture that reminds me of my heritage and how it all fits into what I do, day in and day out,” he said.

Staying close to his home state while his career developed has, in some ways, become simpler throughout Combs’ time at the Federal Reserve. Though enhanced technology tools he is able to oversee teams across the United States.

“My group is really focused on providing technology solutions to bank examiners nationwide,” he noted.

He recalled that when he was hired in 1994, it was uncommon for all Fed employees to have their own computer. Today, Combs said technology supports a significant amount of what the Fed’s teams of bank examiners do in their day-to-day work. The professionals working under him also help shape Fed technological solutions, designing systems and best practices for teams to implement across the Federal Reserve System.

“Regardless of the fact that I live in Oklahoma, I’m able to make a difference to every examiner that’s doing their job across the country. That’s really meaningful, I don’t have to be anywhere else and we can still make effective change to the system.”