On 'Point' with her roots 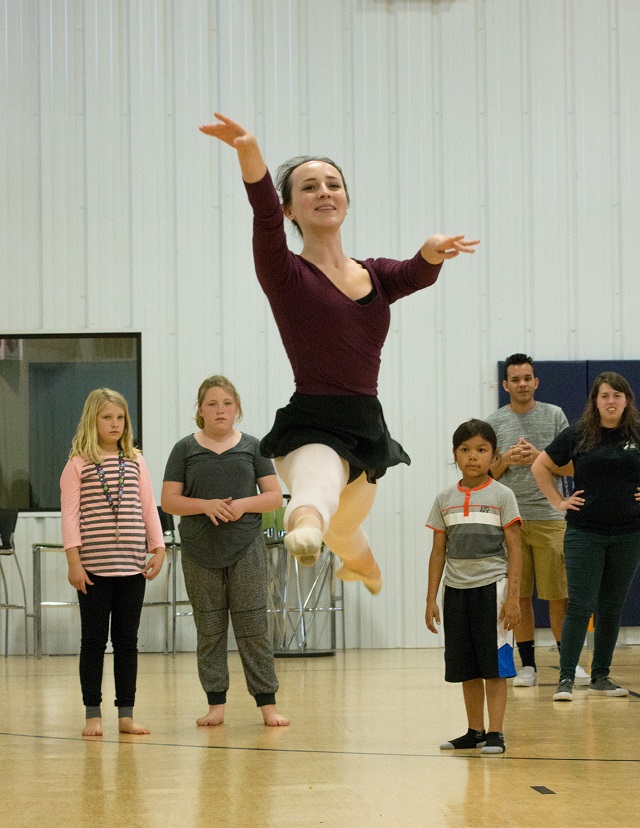 A Citizen Potawatomi tribal member with a special talent traveled from California to learn more about her culture and to teach her craft to students at the CPN Child Development Center in Oklahoma this spring.

Kate Schoeman, a member of the Bertrand family, first put on a pair of ballet shoes as a 10-year-old in Orange County, California, much later than when most dancers take up the art.

“I started tap and got introduced to ballet. When I was twelve, I auditioned for Orange County School of the Arts and somehow I got in. That’s when I learned the bulk of my ballet and point technique and I learned modern dance as well,” Schoeman said.

She auditioned with 350 candidates just to be accepted into her high school. Schoeman was chosen with seven other students in her area of expertise.

She was introduced to the idea of coming to CPN through a camp at her school that specialized in community outreach. The camp teaches dance, drama, guitar, vocal and visual arts workshops to kids during summer break.

“I think because I wasn’t able to start ballet until I was about 10, and usually when people start they are a lot younger, I didn’t realize how much I liked it and I wish I would have started earlier. That really prompted me, especially with camp Camp Orange County School of the Arts , that I wanted to teach younger people about ballet and expose them to the kind of art form that I wish I would have been exposed to,” Schoeman said.

She visited Oklahoma during her spring break and stayed for a week. On the second day of her stay, Schoeman, her mother Wendy, and Vice-Chairman Linda Capps went to Wanette, Oklahoma to get a glimpse of where her family once lived.

Schoeman said that the only Citizen Potawatomi members she knows back home is her immediate family, so she enjoyed being able to see a little bit of Oklahoma with Vice-Chairman Capps.

“Overall, I feel very blessed, everybody in this community has been so nice. All of the kids were so willing to dance and everybody here loves it. It feels good to be able to have this opportunity…I’m just very grateful,” she said.

Schoeman realizes that not everyone will be interested in ballet, but she hopes that they will learn about it and someday go see a ballet in person.

Schoeman currently works part- time at The Dance Spot, one of the highest-ranking competition dance studios in the nation, and attends school in Santa Ana, California. After college, she aspires to work in Disneyland performing arts and eventually pursue a career in medicine as a physical therapist using the experience she has had with dance injuries and rehabilitation.