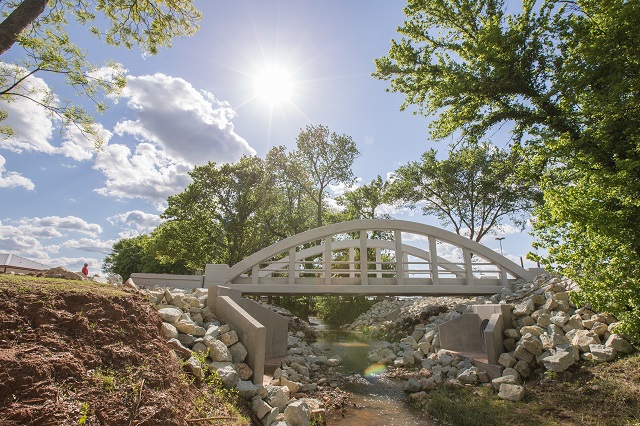 Those traveling from out of state to the Family Reunion Festival routinely see a different landscape from the years before in and around the Citizen
Potawatomi Nation’s FireLake complex.

In 2017, the changes will be as evident as ever, with buildings rising out of cornfields, a once-closed bridge in the heart of the Festival grounds open for foot trafc and an upgraded FireLake Golf Course and exhibits at the CPN Cultural Heritage Center all on display for Citizen Potawatomi from around the country.

Thought to be Pottawatomie County’s oldest span, the Squirrel Creek Bridge is a familiar sight to many Festival attendees, most notable for being closed since 2013. Yet it’ll be open for foot trafc at Festival after the CPN Roads Department utilized federal grant funds to rehabilitate the 100 year old single span rainbow arch bridge.

Rising from what was once a cornfield just northeast of the tribal administration building, two new buildings housing CPN Workforce & Social Services and the Transit Propgram stand as a testament to the tribe’s growth since last Festival.The former has transitioned from its previous name, CPN Employment & Training Department, but provides many of the same services.

The only person more thrilled than Pottawatomie County golfers about the re-opening of FireLake Golf Course after nearly two years of renovations is Director Chris Chesser, who will have the new clubhouse and renovated course open exclusively for Festival attendees. The course will host a 9-hole, 72 person scramble and the new clubhouse will be open for tours. Attendees are encouraged to join the clubhouse ribbon cutting ceremony Friday afternoon of Festival  before the tournament begins.

Stop by the Cultural Heritage Center to see new exhibits and a traveling exhibit from the Smithsonian National Museum of the American Indian. “Patriot Nations: Native Americans in Our Nation’s Armed Forces” tells the remarkable history of the brave American Indian and Alaska Native men and women who have served in the United States military. Tribal members will have the chance to learn more about the history and culture of the Potawatomi people with guided tours of the newly completed exhibits and the other activities that people have come to expect and enjoy.