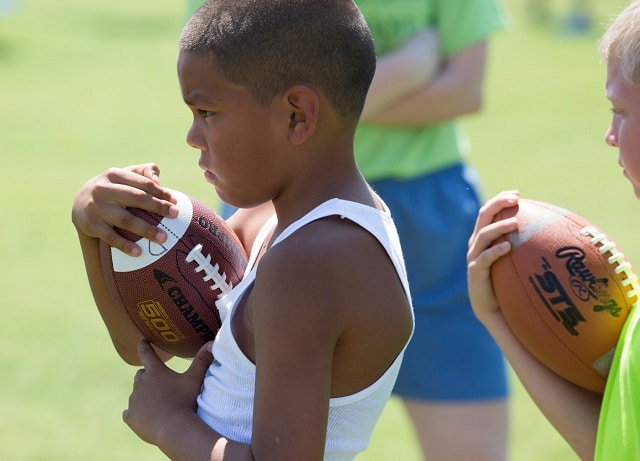 The Day of Champions Football and Sports Skills Camp is set to return to Shawnee this June. The camp is co-hosted by Citizen Potawatomi Nation and Day of Champions Inc., which was founded by former collegiate football coach Ken Heupel and son, Josh, the 2000 national champion from the University of Oklahoma and current offensive coordinator at the University of Missouri. Potawatomi tribal members and children of tribal employees can participate at a subsidized price due to a donation from CPN.

“These camps have grown over the last 10 years, and with football and sports skills for softball, we’re able to offer it to both boys and girls,” said FireLake Wellness Center employee Sarah Lawerance, who helped organize the camp at CPN more than a decade ago.

Last year’s event hosted 128 campers, both boys and girls, who participated in sports skills training exercises for football and softball. The campers are led by professional, collegiate and high school coaches who promote the camp’s four main principles amidst the physical instructions. Coaches center all activities on discipline, trust, respect and hard work. The examples they give are as simple as showing that discipline can mean being the student sat at the front of the class, or saying “please” and ”thank you” as signs of respect.

Lawerance, whose connection to the Heupel family helped bring the camp to Citizen Potawatomi Nation more than a decade ago, described the impact of the event on a former camper who brought his own son a year ago.

“We had a man who came to camp 12 years ago and was going down the wrong path. The coaches helped change his point of view and this year, he brought own his son because he wants him to stay on the right path and learn the same things that he did,” she said at the close of the 2016 event.

This year’s event is on June 26, 2017 at FireLake Ball Fields. For more information contact slawerance@potawatomi.org or download the registration form at http://cpn.news/DOC2017.