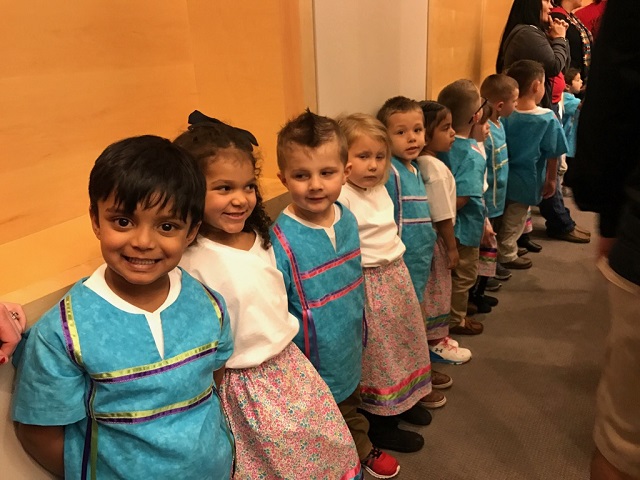 The University of Oklahoma held its annual Native American Youth Language Fair competition at the Sam Noble Museum, and once again Potawatomi language students did well. Students from the CPN Child Development Center four-year-old class placed second for their performance in the pre-K to second grade, large group song category.

“They are little guys for this category. It’s pre-K to second grade but they aren’t really pre-K, we are talking four year old kids, so I thought they did an awesome job,” Neely said.

CDC pre-K students sang two songs in the Potawatomi language – “How is the Weather Today?” and “Hello-Goodbye.”

“OU has been hosting the native language fair for 15 years and the tribe has participated in the five of them,” said CPN Language Director Justin Neely. “We saw it as a way for to incentive what the kids had been learning in our language classes. It took a couple years before we had a group comfortable enough to perform, but I think our high finishes in the competitions show how far our CDC students have come.”

Tribes from across the nation travel to compete in song and dance categories to encourage children to learn their native languages and about other tribes.

“It’s really the only event of its kind anywhere in the country that I’m aware of. The lucky thing for us is that it’s only 45 minutes down the road and we don’t have to travel from New Mexico to be a part of it,” said Neely.

In the past four years, CPN students have taken first place. Students begin practicing for the language fair in January during the afternoon language class at the child development center.

“I think a lot of the success has to do with the dedication of the staff, I’ve got some great employees that work in the daycare. They are really receptive about what we are trying to do. They are happy to let us come in and practice extra times if we need to with them,” Neely said.

“At home, we enjoy and look forward to Liam’s ‘performance’ of what he has learned that week,” parent Alesha Hill said.

Neely says the parents are very receptive and that CPN always gets a nice turn out to see the kids perform.

Hill agreed and said, “Even though I’m not Native American, I feel my son’s Native heritage is an important part of who he is and an imperative part of his education, CPN provides a fun learning environment that has allowed Liam the opportunity to explore his Native American culture through language music and dance.”