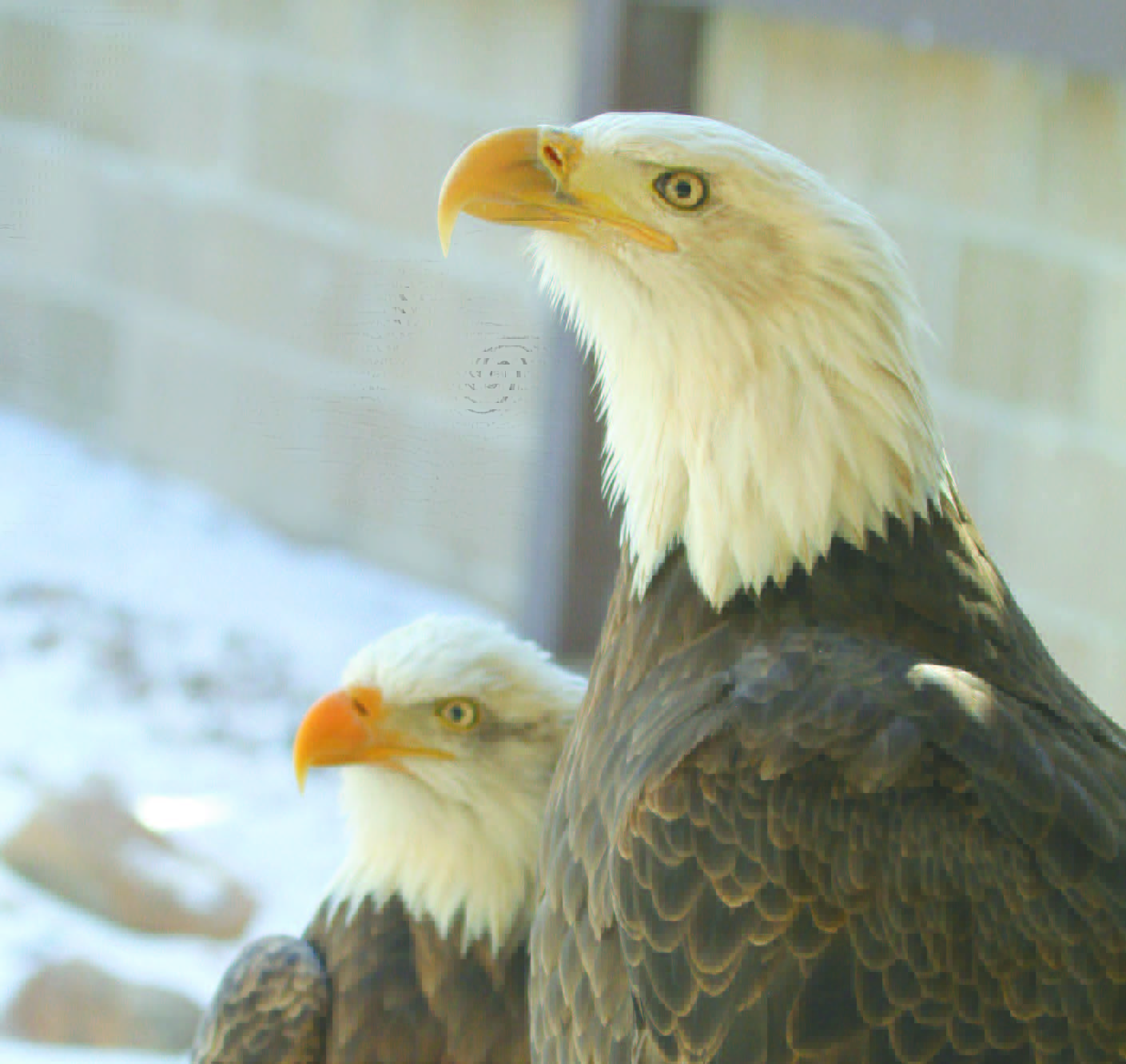 Shortly after the Citizen Potawatomi Nation Eagle Aviary opened in June 2012, Region 6 of the U.S. Fish and Wildlife Services reached out to CPN, knowing we were not at capacity, in hoping to find placement for several eagles confi scated and in need of immediate placement. Without hesitation, tribal leaders agreed that CPN would speak for these eagles. Planning for travel to Florence, Montana to bring them “home” began immediately.

One of those was a female sub-adult bald eagle. According to the limited information we received, her name was Kyla and she had possibly fallen out of the nest and suffered a severely broken wing. What, if any, treatment had been done was not clear. A short physical exam indicated that she had previously been housed in less-than-ideal conditions for some time.

After the long trip home to Oklahoma, the eagles were introduced into separate enclosures based on their physical abilities. Kyla was placed in the non-flighted 25-by-50 foot enclosure with four other bald eagles that arrived when the CPN Aviary originally opened. Unlike most eagles, she was reluctant to leave her kennel. Once in the enclosure, it was apparent she was not accustomed to a large space, as she remained in a small 4-by-4 foot area the first few weeks of her introduction.

One afternoon, in late summer, she made her way to the running stream after watching the other eagles, where she finally bathed. Not knowing if she had ever had the opportunity to enjoy water in the wild, it was a moving experience. Clearly, Kyla was finally at home in her new environment as she charged up and down the stream splashing water and vocalizing. She became the dominant female in the enclosure and received the Potawatomi name Kche Gizhek (Big Sky). Her name not only honors the place she came from, but also the personality that she grew into as she learned how to be an eagle again.

From the first day Kche Gizhek was introduced into the enclosure, Charlie whose Potawatomi name is Zagéndem-nené (Nervous Man), the smallest male bald eagle also housed in the enclosure, showed an interest and stayed near her, even though other females were present. This bond has persisted, and to this day, they are never far from one another. In the winter of 2014 Kche Gizhek started carrying grass and pulling branches from the trees in the enclosure and the pair worked for a short time at nest building.

This pair has built a nest each year since. We are able to monitor them closely with cameras, and have seen no clear indication that the two could successfully mate due to their disabilities.

In 2015 though, Kche Gizhek laid her very first eggs, but subsequently broke them due to her inexperience. In 2016, she laid again. After several weeks we candled the eggs and determined they were not fertile. However, on the 36th day of incubation, when a chick should hatch, Kche Gizhek brought food to the nest. She did not eat for days. Concerned for her welfare, we reached out to our veterinarian and Sia: The Comanche Nation Ethno-Ornithological Initiative. We felt strongly that this pair could be foster parents and that might benefit Kche Gizhek’s disposition.

We provided the pair with a newly hatched tawny eagle, an exotic species, to rear. Kche Gizhek and Zagéndem-nené did an exceptional job raising the foster chick. In winter 2016, the pair once again began nest building and two eggs were laid by mid-February 2017. We did not candle these eggs or interfere with the pair since there had been no previous evidence to suggest that the eggs might be fertile. We again made plans to provide the pair with a foster chick to raise.

The first egg did not hatch and we had little hope for the second because it was very small. The day-long process of the chick piping and hatching from the egg happens between 34-36 days. At sunrise, on the second egg’s 36th day of incubation, we had no indication of any activity. However, at 10:04 am on March 21, 2017, much to our surprise, the egg hatched. The first of spring had arrived with gifts.

Prior to the chick completely hatching, we noticed both parents standing in the nest, looking down at the shell. A small hole in the appeared as the chick began to work his way out. Transfixed to the monitor in the offi ce, we watched as Kche Gizhek turned the egg repeatedly, instinctively helping the chick out of the remaining shell as it hatched. Both parents looked down at the small, wet, and tired chick before Kche Gizhek began brooding the chick to keep it warm. Gently, with her large feet and talons closed into a ball, she moved to straddle the chick and nestled it against her warm chest. The first four days are critical and we had several cold nights but the eaglet is strong and vigorous, growing rapidly with two exceptional parents.

Congratulations Kche Gizhek and Zagéndem-nené! The Nation could not be happier. More updates on the chick will be available in upcoming editions of the Hownikan.

For more information or learn more about the CPN Eagle Aviary, visit potawatomiheritage.org/#aviary.