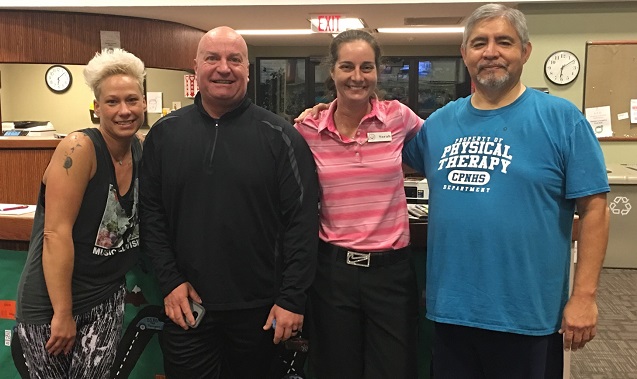 As part of Citizen Potawatomi Nation’s preventative wellness efforts for tribal members and employees are annual fitness competitions held at FireLake Wellness Center. Typically coinciding with events like the men’s NCAA Basketball Tournament or other high profile events, employees take on a fitness challenge at FireLake Wellness Center under the supervision of the personal trainers and staff there. On treadmills, ellipticals or walking the second story track, employees compete to log the most miles on the machines in a window of time, with winners receiving an award and recognition for their efforts.

The latest competition, “The Road To the Super Bowl,” just wrapped up, with competitors logging the same amount of miles they would have if they’d have travelled from Shawnee, Oklahoma to Houston, Texas, the site of the National Football Championship Super Bowl.

The competition drew 64 FireLake Wellness Center members making up 16 teams. Teams of four members each logged 90 minutes per week, with their mileage confirmed by the wellness center’s staff. The “road race” began on November 21, 2016 and concluded February 11, 2017.

The top four teams were Beep Beep, FireLake Foxes, The Rejects and The Winners.

Eventual first place finishers Beep Beep led throughout the competition, completing the course on January 30. Team members asked to be referred to as:

The goal of the competition and others like it is to get employees, tribal members and other FireLake Wellness Center attendees up and moving, with an emphasis on promoting positive health outcomes to mitigate the development of preventative health problems like diabetes and other ailments.

The Wellness Center is a 21,500 square foot facility housing the Title VI Elders Program, an exercise facility, walking track and the Diabetic Initiative Program. The exercise facility staff works with individuals to customize an exercise program that best fits their physical needs.