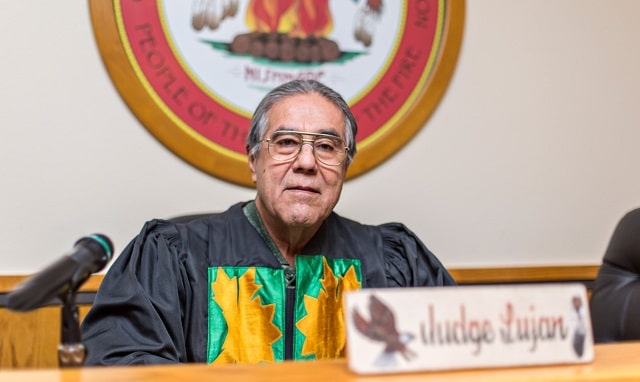 In a state where prison overcrowding has become an economic, criminal justice and political issue, the pendulum has swung in recent years as Oklahoma policy makers seek to halt overcrowding at state prisons. In December 2016, Oklahoma Department of Corrections Director Joe M. Allbaugh put it bluntly saying “We are beyond the tipping point. The staff and the public are at risk every day when we operate at this capacity. We are critically understaffed in facilities that weren’t built to house inmates.”

As a result, efforts at criminal justice reform and diverting non-violent offenders to drug rehabilitation and counseling efforts have grown in popularity. At Citizen Potawatomi Nation, the staff in several departments have partnered since 2014 to create a drug court aimed at helping misdemeanor offenders before they are locked up for long stretches. Thus far, it has had 15 participants in the program since its implementation. The CPN Healing to Wellness Drug Court is responsible for misdemeanors only. Felonies are dealt with higher up in the criminal court food chain, making healing to wellness court participants a unique group who, in the eyes of the justice system, still have a chance to alter the path that led them to the courtroom.

“We are looking for people who are ready to change their lives,” said CPN District Court Judge Phil Lujan, who oversees the program.

The staff members of the court come from various departments at the tribe, including Indian Child Welfare, Citizen Potawatomi Nation Behavioral Health, the district court and CPN Workforce and Social Services. They are also individuals who demonstrated in a recent court meeting a compassion and personal investment in those they supervise that might surprise outsiders.

When one court staff member noted that a participant had secured a job, an enthusiastic and almost unanimous “Yay!” went up from all the staffers, including the judge.

Should the healing to wellness court not exist, this same individual would have faced six months in the county correctional center for her offenses. As part of the court’s program, attendees are required to personally check in at the CPN District Court with healing to wellness court officials on a weekly basis, if not more frequently, depending on their progress in the program.

After the celebration of the announcement that their client had found a job, the judge instructed the probation officer to find her a ride to her court check-in date, even if it fell during work hours.

“Let’s solve her transportation issues so she can work,” said the judge.

Not a traditional court

Judge Phil Lujan has spent more than four decades in the courtroom and his affable demeanor gives way to contemplative assessments of the cases before him in the healing to wellness court. When staff report that a participant missed some court-mandated reporting requirements, he opened the floor to discussion.

The court doesn’t operate in a typical fashion, with a judge up front and prosecutors and defendants at tables facing him or her. The healing to wellness court involves a group dynamic, resembling a board meeting more than a tribal court. The handful of court staffers, ranging from probation officers, counselors, case workers and attorneys, discuss whether the individual would receive sanctions for failing to meet the court’s requirements.

Each staff member knew the offender on an almost personal level, including their work life, family situation and progress in the program thus far. Comparatively, the investment in terms of getting to know the offender and their life’s specific circumstances was stark in comparison to what one would assume would take place in a more traditional courtroom.

While hoping for the best and doing their utmost to help those in their charge, the staff isn’t a crowd that believes in leniency if it isn’t earned. They’ve all seen enough to know when a participant is trying to get around the rules.

Prodded by the judge, the court’s staff gave their views on the participant’s recent actions and recommendations moving forward. The vote on whether to level a sanction forcing the participant to wear an ankle monitor deadlocked in a tie. The judge laughed as he noted that passing judgement wasn’t as easy as it looked.

“It is hard,” said Nicki Skaggs, court case worker who was in on the discussion. “It’s not fun.”

Attorney Kelley Harris, who normally serves as a prosecutor in the CPN District Court, elaborated on why he opposed the ankle monitor. Harris explained that taking the path the participant had been on since joining the court nearly a year before, the infractions in this specific instance did not merit a sanction as severe as an ankle monitor. He elaborated, noting that the individual’s work life would have been negatively impacted with a device attached to him.

For Harris, who is a citizen of the Cherokee Nation and an attorney in other tribal courts in the state, the ability to make these discernments on individual cases is important In the discussions on sanctions, the trained lawyers in the room who serve as defense attorney, prosecutor and judge during normal CPN District Court proceedings oppose the ankle tracking option.

“I think we know what the impact of these sanctions are long term (for this individual) and took that into account,” he explained, noting that as a criminal prosecutor in another court setting, he wouldn’t necessarily have that option available.

One day at a time

According to the National Institutes of Health, recent advances in science show that addiction is a brain disease that impacts specific parts of the brain and changes connections between neurons there. This includes changes to memory, learning, impulse control, stress reactivity and many other functions.

Participants are required to undergo substance abuse counseling and treatment as part of the program. For many, these are intractable challenges that require support and trained counseling professionals, and specifically for the CPN Healing to Wellness Court, tie in traditional Native American practices to help with this process.

The CPN Behavioral Health Program works closely with the healing to wellness court, with two
licensed drug and alcohol counselors sitting as members of the court. The LADCs work with the court participants and monitor their sobriety, offering support where needed.

CPN Behavioral Health Director Dr. Glenna Stumblingbear-Riddle noted that despite studies affirming the NIH findings showing addiction is a disease or disorder requiring medical treatment in many cases, the stigma still remains that it is still a moral weakness.

Yet she was effusive of efforts like those of the CPN Healing to Wellness Court.

“Drug courts are effective and many people are able to go on and live out their dreams,” she said.

Staying sober and adhering to the court’s stipulations can be a challenge. Yet the requirements, schedule and structure do serve a higher purpose, helping participants form good habits that will help lead a substance free life. Though they may complete the healing to wellness court, the point of the program is to prepare them for the long and challenging road they’ll face throughout their lives when the court isn’t there.

The hope is that, as Judge Lujan noted, people in the court truly want to change their lives, and with support from the staff of the healing to wellness court, it must happen one day at a time for participants.

“In all psychological wars, it’s never over,” noted musician Bruce Springsteen in his 2016 biography. ”There’s just this day, this time, and a hesitant belief in your own ability to change. It is not an arena where the unsure should go looking for absolutes and there are no permanent victories.”